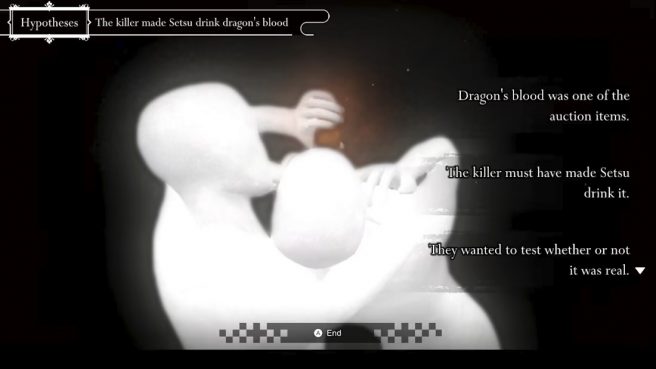 Square Enix has readied a new update for The Centennial Case: A Shijima Story, bringing it to version 1.0.3.

A couple of improvements are included – specifically for one of the tutorials and content of the notes in Chapter 5. New control features, adjustments, and fixes are also available.

The full patch notes for the new 1.0.3 update for The Centennial Case: A Shijima Story are as follows:

● Adjusted part of the “Rules for Reasoning”.
● Changed “Suspend” to “Save”.
● Improved the explanation in the tutorial about moving “Clues”.
● Improved the content of the notes in Chapter 5.

● Adjusted and improved the following areas in the Cognitive Reasoning Space.
・ Enlarged the valid area, making it easier to fit “Clues”.
・ Made it so the path can be moved whilst holding a “Clue”.
・ Made improvements to allow you to skip through line-by-line when viewing “Hypotheses”.
・ Made improvements to allow you to skip the whole summary conversation.
・ Changed so that “Clues” can be connected from any point when connecting several “Clues” on the path.

● ! on the title screen. Fixed a bug that prevented the exclamation mark from disappearing.
● Fixed a bug that, under certain conditions, caused the video to stop before moving onto a question.
● Corrections of errors in the Korean text, and in the text and video for other languages.
● Other minor bug fixes.