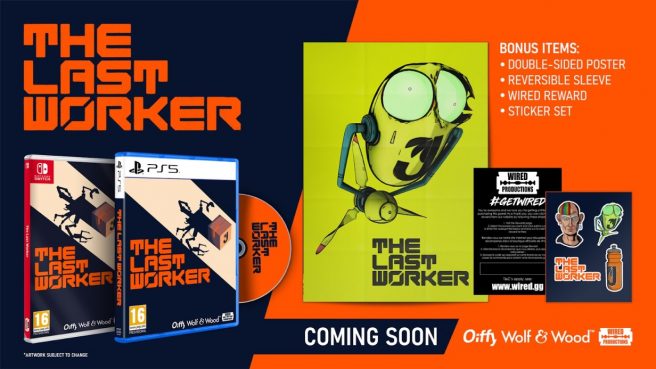 Wired Productions has confirmed that it’s planning a physical version for The Last Worker on Switch, which will be known as the Jüngle Pronto edition.

Along with the game on a cartridge, buyers will receive a couple of extra goodies. It comes with a reversible sleeve, Jüngle stickers and a double-sided poster.

The Last Worker is a first-person narrative adventure centered around humanity’s struggle in an increasingly automated world, where humans are being replaced by robots. The game combines a hand-crafted art style created in collaboration with comics legend Mick McMahon (Judge Dredd, 2000 AD) and unique, immersive gameplay mechanics, seamlessly interwoven into a narrative game like no other.

Other than news about the physical version, The Last Worker has received a new holiday trailer that takes viewers through the Jüngle Fulfillment Centre (JFC-1) during the most fulfilling time of the year for millions of warehouse workers. View it below.

The Last Worker is due out for Switch in 2023, and fans can register their interest in the Jüngle Pronto physical edition here.