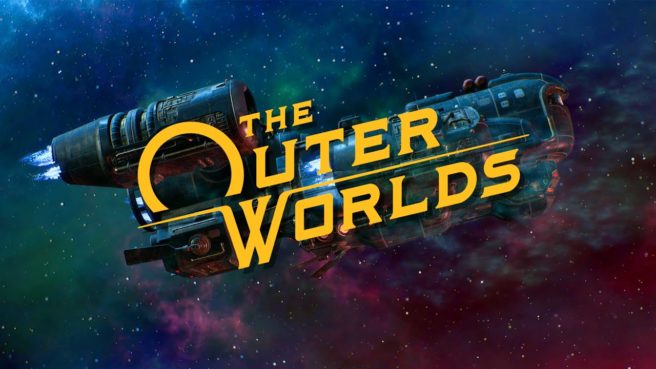 Switch is about to receive another big game with the arrival of The Outer Worlds. The RPG comes from Obsidian, the studio behind Fallout: New Vegas, South Park: The Stick of Truth, and more.

Ahead of the Switch launch, we caught up with co-director Tim Cain and production director Eric DeMilt. We spoke about the Switch port, including the challenges involved. There’s also talk here for those that have already experienced The Outer Worlds, as Cain spoke about how the project changed since its early development, what it was like making a compact RPG, and more.

What do you remember of the early days of The Outer Worlds’ development? How much did the game end up changing over time?

Cain: Leon and I were in a room by ourselves for three months, just talking about setting, storylines, characters, brands, and system mechanics. Some elements, like the basic setting and storyline, took shape early and barely changed afterward. I think we had the brands written up early and quickly, almost like they appeared fully formed. Some characters, like Phineas and the Chairman, we made during that initial stage too.

System mechanics was quite different. We made many of them early, but we changed them when it was either time to implement them or during testing. TTD, called shots, companion abilities, and the disguise system all changed dramatically during development. Ironically, since it was a brand-new system, flaws were implemented with hardly any changes to their original design.

Obsidian has always been known for its extensive dialogue choices and myriad paths to character development and outcomes. What’s the process like when choosing what turns characters can take and how it affects the overall gameplay, knowing it’s entirely up to player choice when it comes to party members?

Cain: We design every main quest with main different solutions. That way, no matter what kind of character the player creates, what decisions they make along the way, and who they choose to bring along, those main storyline quests are always completable (if not always the same way as the player may have seen with a different character). Side quests are a different matter. Some may not appear for some players at all, and when they do, they don’t have as broad a set of solutions, meaning that a dialog character may have a difficult fight or a combat character may get stuck at a locked door. That’s OK, since side quests can’t stop you from finishing the game. And we have noticed that players come up with ingenious solutions and find a way to finish most quests anyway.

Was it always intentional or expected that Parvati would become such a core part of the experience? Much like the flexibility of the rest of the game, she doesn’t have to be there with you for any of it, but she feels like one of those characters that’s just so likeable it just wouldn’t feel the same without her.

Cain: I had no idea she would be considered so core by so many players, even though I liked the character and loved her voice acting. Like you point out, players don’t have to take her or even talk to her. But she does seem to embody the heart of the game world. She’s in a bad situation, but she is making the best of it and doesn’t let it make her a bad person.

I’m sure there is a lesson in there, somewhere.

One reason why The Outer Worlds stands out is because you still have a sci-fi epic, but it’s trimmed down and tailored in just the right way to be very memorable. Did the team go into the project looking to avoid some of the bloat that can sometimes be associated with RPGs?

Cain: The first thing I told my lead designer, Charlie Staples, when he came on the project was “EDIT ME!”. I tend to throw in every idea I have, good and bad, appropriate to the setting or not, just to see how it works. Charlie was instrumental in trimming back and keeping the system mechanics reasonable.

As for the setting size and story length, we had a mantra during development: “time and budget”. We didn’t have much of either, so we had to develop quickly, decide early what worked and what didn’t, and cut frequently. The end product may be smaller than some open world RPG’s, but I remember thinking that if the biggest complaint about our game is that people wanted more of it, that isn’t a bad thing.

Games of this nature tend to have a lot of brown to reflect the rust of a post-apocalyptic society and a bleaker image, but The Outer Worlds is beautiful in a majority of its locations and only really emits a darker tone in the more dangerous, uninhabitable areas. How many planet concepts were there before settling on the ones we ultimately got to play in?

Cain: We had planetary cuts, like eliminating the open world map of Terra 2, reducing the open world map of Monarch, and also getting rid of one whole planet entirely as a landing option. As for tone, if you mean story tone, Leon and I strike a good balance between darker (which he likes) and lighter (which I like). When either of us sees the other go too far in their preferred direction, we pull them back.

But if by tone you mean actual color tone, then that is all Leon and our lead artist Daniel Alpert. I am color blind and contributed nothing to that discussion.

When did the idea of bringing The Outer Worlds to Switch first come about? At what point was it determined that a port would be technically feasible?

DeMilt: We’ve always been interested in seeing The Outer Worlds on as many platforms as possible, but I think it was late in development when the idea really became a reality. The first steps grew out of conversations between our publishing partners at Private Division and their counterparts at Nintendo. Most of our dev team are avid Switch and Nintendo fans, so we jumped at the opportunity to fly up to NOA with Private Division and show off the game before launch.

Once the port was green lit, we worked with Virtuos, a development team with a strong background doing Switch ports and co-development in general, to get them started on a proof of concept; getting the Roseway map up and running and playable on Switch dev hardware. Being able to run around, talk to NPCs and take quests in a handheld/Switch version of the game was really cool.

Going into the Switch port, were there any concerns that the visuals would be heavily compromised? How do you feel it looks in compared to other versions now that development has wrapped up?

DeMilt: There are always concerns with visual quality and gameplay impacts going from one platform to another. We’d already build somewhat scalable content to be able to support the broadest ranges of PC and console hardware, so we knew there were some of the bottle necks might be, but we really relied on the experience of the Virtuos team to get the most out of the hardware without sacrificing quality of visuals, or quality of gameplay.

It took a lot of hard work, and a lot of optimization, but overall, we’re very happy with how the game looks and plays.

Were there any particular challenges involved in porting the game over?

DeMilt: I think the team found challenges in a couple of areas. Porting a game with thousands of assets designed to be loaded and displayed on current gen PCs and consoles with the power to display in 4k made streaming and visual fidelity a challenge on a handheld.

In addition to the graphics challenges, we also spent a lot of time tuning controls to help with playability on the Switch. The default settings coming over from a console or gamepad input left the game unsatisfying to play. We tuned sensitivity, exposed some inputs to users in the settings menu, tweaked and iterated aim assist values and added support for gyro aiming, and sticky targeting.

What can you tell us about The Outer Worlds’ future DLC? Will it eventually be made available in the Switch version?

DeMilt: The Switch version of The Outer Worlds will get the DLC that is being made for the game on other platforms.

Do you feel like there are still stories left to tell in The Outer Worlds universe? Would something like a sequel make sense at some point in the future?

Cain: There are certainly more stories to tell, and you will see them in upcoming DLC!

The Outer Worlds launches for Switch on June 5. Pre-loading is currently live on the eShop.