Posted on December 7, 2014 by Patrick(@Patricklous) in DS, Features, Reader Poll 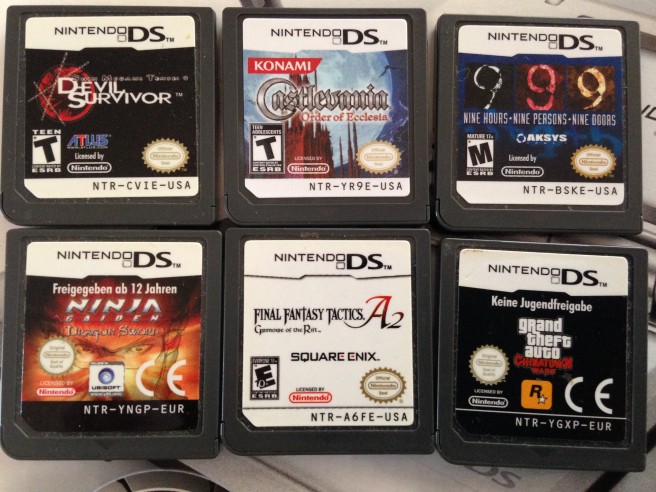 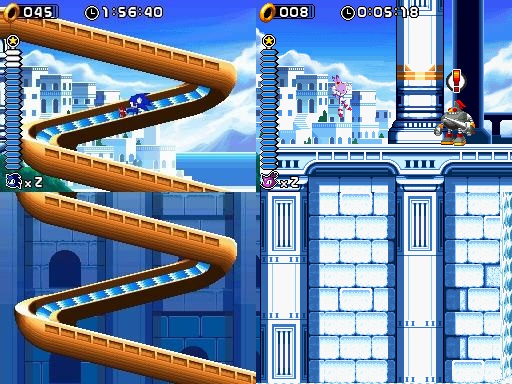 Released the same day as one of the worst entries in Sega’s long-running series, Shadow the Hedgehog, Sonic Rush might actually be one of the best. Sonic Rush brought the spiny speedster back to his 2D platforming roots, though it was keen to show off the 3D capabilities of the console, particularly in boss fights. As it should be, speed was the focus in this Sonic entry; doing tricks netted Sonic or newcomer Blaze the Cat a bit of extra boost for speeding through levels. Jet Set Radio’s Hideki Naganuma also brought a fresh sound to the series with his own funky musical stylings. Though Sonic appeared in several other DS platformers (and one RPG oddity), it’s this first outing on the console that scored the highest with you guys. 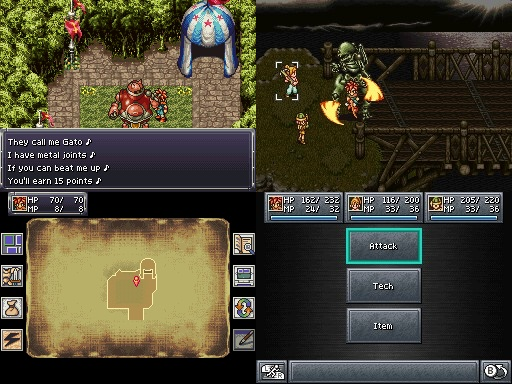 The DS was home to a lot of ports of old Square Enix RPGs: from 3D remakes of Final Fantasy III and SaGa to fresh translations of games like Dragon Quest V that had never been released in English. But the one that scored highest on this list was their re-release of the classic time travelling RPG, Chrono Trigger. Still considered by many as one of the best RPGs of all time, the adventures of Crono hold up surprisingly well, particularly considering that very little was done to actually touch up the circa-1995 production values. Then again, I’d rather Square Enix refrained from messing with Yasunori Mitsuda’s excellent soundtrack. The DS version of Chrono Trigger might actually be the definitive version of the game; it included all the animation cutscenes of the Playstation version with none of the long loading times and even added a few extra dungeons and story ties to its sequel. 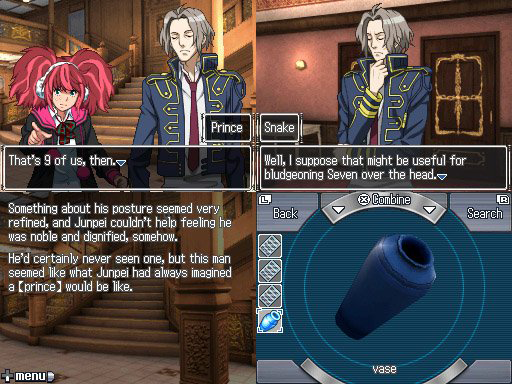 A surprise hit for publisher Aksys Games, 999 drew many players into the “Nonary Game” late in the console’s lifespan. As Junpei, one of nine people locked onboard a sinking ship, players are given nine hours to find a way out by locating a door marked with the number nine. That’s no easy task when it involves working together with eight bizarre characters and having a god damn bomb in your stomach. The game mixed visual novel sections and tense room escapes, which required a keen eye and a lot of math skills. But what really hooked people wasn’t the gameplay, but the narrative. Elaborating on the plot would turn this article into spoiler central, so let’s just say that the game kept plenty of players staying up reading on to find out the next ridiculous plot twist. It must have been so gripping that people didn’t mind having to play through the game several times for the proper ending. 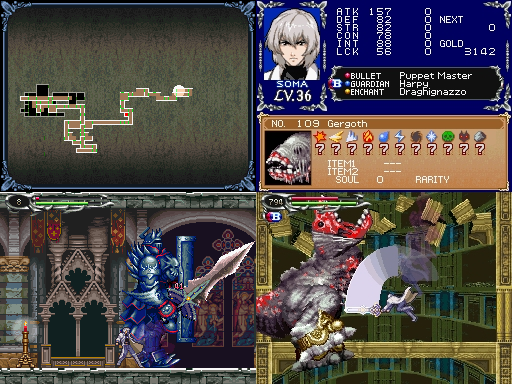 Nintendo DS owners were invited to explore Dracula’s castle no less than three times with a series of stellar Castlevania games. Of these titles, the one that came out on top was Dawn of Sorrow, the sequel to Aria of Sorrow on the Game Boy Advance. I’m more of an Order of Ecclesia guy myself, but I can’t deny that Dawn of Sorrow is a solid installment in the series. Soma Cruz and his soul-stealing powers return – not only can he attack with a range of weapons from swords to handguns to (of course) whips, but enemies drop souls that can be utilised with different effects. Giving Soma the ability to execute special attacks, summon familiars, customize weapons, or transform himself, this “Tactical Soul System” gives a lot of variation to the usual trek through Drac’s lair. And if that wasn’t enough, there are a few unlockable characters to play as too. 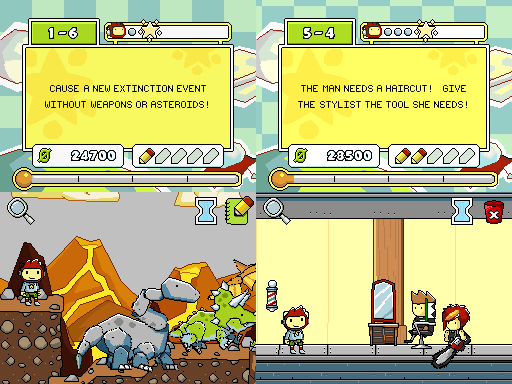 The original Scribblenauts might have disappointed some players, but it was certainly a novel concept. Utilising Maxwell’s magic notebook, players could create anything from a Chimaera to Keyboard Cat just by writing it down. This unique mechanic was put to great use in solving several challenges, testing both creativity and vocabulary. Alternatively, you could just spend hours messing around on the title screen. The game’s sequel, Super Scribblenauts, was even better, adding some much needed polish. Super Scribblenauts built upon the original game with new objectives, new adjectives and actually functional controls!

Kingdom Hearts met Monster Hunter in this Nintendo DS entry in the series with a baffling title. 358/2 Days took players on another journey through iconic Disney locations like Agrabah, Halloween and Neverland but mixed it up by structuring the game around several missions. Playing as Roxas and accompanied by other Organization XIII members, the story shed some light on what the heck was even going on in the second game. 358/2 Days also featured an ambitious multiplayer mode with four-player co-op. Players could team up to complete missions as all their favourite characters such as anime cloak guy, anime cloak girl and Donald Duck. Each sported their own special abilities, which could be further customized with the game’s “panel” system. And of course, the visuals were up there with the best on the console, with 3D graphics that weren’t too far removed from the PS2 games. All up, it’s a probably great game that I don’t think any of the staff writers actually played. 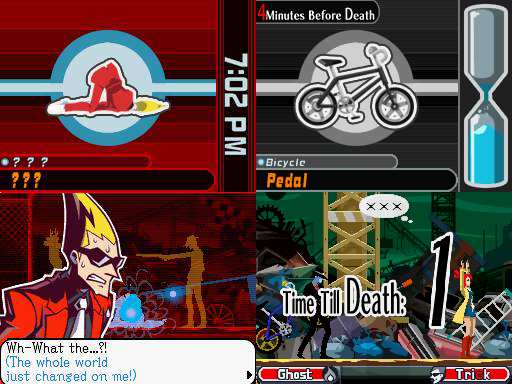 Ghost Trick has to be one one of the most original and endearing games on the DS. While it was developed by many of the staff that worked on Capcom’s Ace Attorney series (including series creator, Shu Takumi), Ghost Trick is very much its own game, with a completely different cast, setting, and gameplay unlike anything else on the Nintendo DS. Ghost Trick covers the entire emotional range from heartwarming highs to gloomy lows, and it’s all thanks to solid writing and an excellent cast of characters.

Unraveling the mysteries behind protagonist Sissel’s death is incredibly compelling and getting around by possessing and moving objects is a unique method of transportation (not to mention useful for preventing some characters unfortunate fates). Also of note are the visuals in Ghost Trick. Not only does the smooth, seemingly rotoscoped animation make Ghost Trick one of the best looking games on the Nintendo DS, it also helps to bring out a lot of the characters’ personalities. 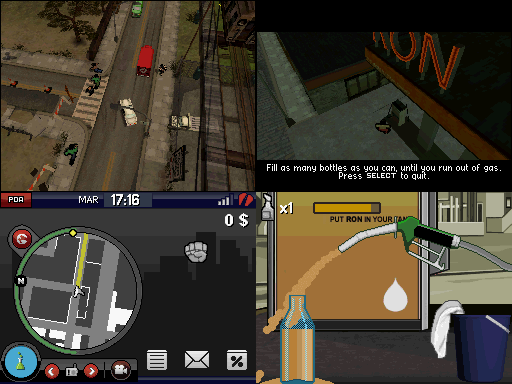 When it was first announced, Grand Theft Auto: Chinatown Wars seemed like a strange choice for the DS with its family-friendly image. The fact that the previous entry on the GBA wasn’t particularly well received probably didn’t help either. However, the end result was actually pretty dang great, returning the series to its top-down roots while bringing a rare open-world experience to the console. The console’s touch screen was put to good use, both in navigating Liberty City and adding variation to the game’s missions.

Though Chinatown Wars’ visuals lacked the detail of console entries, it sported a cel-shaded style that gave the game a unique look. Similarly, the radio stations mightn’t have had all the licensed music of Grand Theft Auto V, but it’s hard to complain when the original compositions are still great. Rockstar didn’t make many compromises came to bringing the console experience to Nintendo’s handheld and that’s probably why Chinatown Wars is held in such high regard – the game is currently sitting pretty as the top-rated Nintendo DS game on Metacritic. Heck, Chinatown Wars might be even more compelling than the mainline series of Grand Theft Auto games thanks to the addition of some truly addictive drug dealing side missions.

Several of the Ace Attorney games received votes, but the most popular entry seemed to be the one that started it all. Phoenix Wright: Ace Attorney quickly became a cult classic, mixing elements of visual novels and adventure games with its own unique anime flair. As that spikey-haired rookie lawyer, players were drawn into this game’s bizarre courtroom drama and memorable cast of characters. Even when solving several murder mysteries, the game retains a sense of humour and it’s partially thanks to the great interplay between personalities like prosecutor Miles Edgeworth, Detective Gumshoe and spirit medium Maya Fay. Several hilarious witnesses also took the stand, from the cowboy detective Jake Marshall to aging security guard Wendy Oldbag to… a parrot? True, the game is super linear but I must have played through it at least three times at this point. There’s nothing like the satisfaction of cracking open a case and watching a witness’ elaborate breakdown, so Phoenix Wright totally deserves his place on the list.

#1. The World Ends With You

The World Ends With You didn’t rank on our most-underappreciated list and there’s a good reason for that – the adventures of Neku Sakuraba were popular enough with you guys to take out the number one spot as the best third party game! Taking place in Tokyo’s trendy Shibuya district, the game was centered around a bunch of hip teens as they find themselves forced to work together in a fight for survival. Throughout the craziest week ever, Neku has to find out the secrets behind this alternate Shibuya and how not to be completely insufferable.

The game’s battle system continued the cooperative focus of the storyline, dividing the action between both screens of the console. It’s a tough system to get the hang of (I could never wrap my head around it, personally), but it had a lot of depth with different partners and heaps of “psychs” to equip and mess around with. The World Ends With You wasn’t just a creative new IP on Nintendo’s handheld, but a bold new take on the RPG genre that was absolutely packed with brilliant ideas. It’s crazy that other games haven’t mimicked TWEWY and its ability to freely manipulate difficulty, characters’ levels and item drop rates, with no random encounters, to boot! It even had a weird proto-Streetpass system where Neku’s pins leveled up based on time spent away from the game or passing other DS owners. The World Ends With You also sported excellent music and visuals that brought to life the Shibuya setting – that’s probably why they ranked so highly on those two lists!

There’s only one category left to go, so keep your eyes peeled for our look at the titles you voted as the Best First Party Nintendo DS games early next week. The results might surprise you, but they probably won’t.