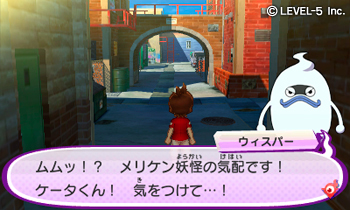 When the game was announced last year, it was confirmed that the game will have two protagonists and takes place in two countries. Keita and Jibanyan’s story will be in St. Peanutsburg, USA while Inaho and USApyon’s story will be in Sakura New Town, Japan. Sakura New Town has a new map Aobahara (reference to Akihabara), along with a NyaKB48 Theater (reference to AKB48).

Yo-kai Watch 3 will have a brand new battle system with the Tactics Medal Board. Placements of the medals on lower screen’s board will also determine yo-kai positions at upper screen. Players will be able to do things like make a formation, evade enemy attacks, and switch in reserve yo-kai.

Yo-kai Watch 3 will have over 600 yo-kai in total. Among the new yo-kai introduced are American Yo-kai and Great Legend Yokai.

The new bosses in Keita’s USA part will also look very American. For example one of the bosses is a lump of garbage scraps.

Finally, here’s a roundup of bonuses: