Posted on July 6, 2015 by Kirara Koneko(@KiraraKoneko) in Features, Game of the Month, General Nintendo 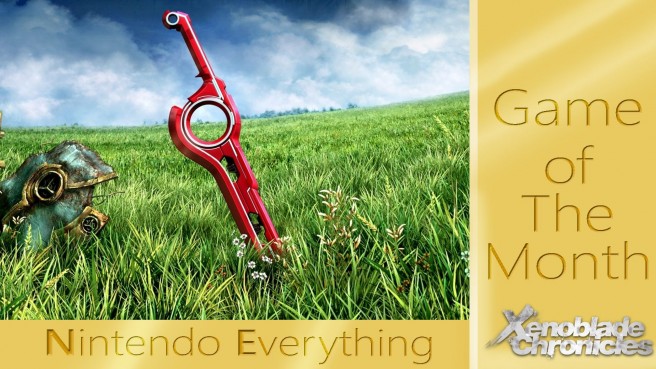 What makes a sword earn the classification of an epic weapon? How do you know the sword you wield will help to change the fate of the world? Throughout many franchises across Nintendo’s systems, there have been numerous heroes, each of whom have generally had an epic weapon to aid them in their lofty quest. Whether by their choice or destiny, these heroes have been selected for a task that only they can achieve. Some must complete this task on their own, some guided by a higher power, and some are blessed with companions to help them along the way. But what all of these protagonists have in common is they hold the key to their fates in their hands.

“The Monado… I hope I can figure out the secret of its power one day.”

The Monado of Xenoblade Chronicles is a special type of sword. Possibly even more of a blade, it is imbued with energy so that it can manipulate “ether”. This blade is unique but not in the same way that other heroic swords are: this weapon is known to have five replicas.

Most individuals cannot wield the Monado and its use will depend greatly on the will of the user. For our champion Shulk, the Monado seems at times more of a curse than a gift; for he is the sole survivor of a group of travelers that went in search of the fabled sword, and thereafter spent his life trying to solve the secrets of this weapon. The blade is strong yet treacherous; one of the first known wielders, Dunban, was unable to fully control it and was forced to sacrifice the use of his right arm to ensure success in battle. As for Shulk, the Monado grants him the power of foresight due to its manipulation of ether. As such he is able to survive the attack on Colony 9. It is only through more tests of his will that he is finally able to unlock another ability that the sword grants, which allows him to predict the future and save those around him. More evidence of the weapon’s treachery is that, since the user changes the Monado, there are times when they are unable to succeed in battle and another must step in for the blade to “ring true”.

Due to the occasional evil nature of the Monado, it was sealed away until that fateful day that Shulk’s party found it once again. It is said to have even led to the death of its supposed creator. The legend is that the Monado’s bearer has the power of the gods and gives its user the ability to decide the destiny of the universe. Who is worthy of such a task? 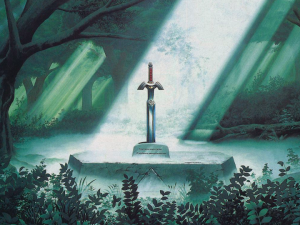 “The Master Sword is a sacred blade which evil ones may never touch.”

Another legendary sword, the Master Sword, is considered to be the “blade of evil’s bane”. In the games from The Legend of Zelda franchise, this is the recurring weapon to aid the hero. Most would consider it to be synonymous with the ability to vanquish evil and break curses brought on by dark magic. The blade has one wielder throughout time and that is the “true hero”. Those who aren’t cannot even touch the sacred blade. It was originally created by the Goddess Hylia as the Goddess Sword that was later forged into the Master Sword and become the true Master Sword once it had been blessed by Princess Zelda. As the sword chooses its master through the ages, that chosen hero must suffer many trials and tribulations before he is given the ability to acquire the sword. It even gives our hero access to other realms by the power of its blade. Since the passages of time are many our hero happens upon his destiny time and time again, continuously using the weapon to save his beloved lands, family and friends. Although his quests are met with much heartache and pain, ultimately the Master Sword guides him to vanquish evil and return those lands to peace once again. 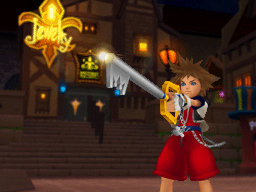 “Why did the Keyblade choose me… I have to know.”

Although the Kingdom Hearts series has jumped from system to system at times, some of its best titles have appeared on Nintendo platforms. Throughout the course of those games we have seen many Keyblades and they have all played an important role in the battle between light and darkness. There are many that have the power to wield a Keyblade, and all have been chosen by the Keyblade itself. Occasionally there are those that even have the strength to give them or take them from others.

They are used in the same manner as a traditional sword, but each has a very unique appearance. Some of the chosen may be called and dispelled at the will of the blade; could these be another possibly treacherous blade? These special weapons hold a power unlike most others, as they can open or close any door – real or supernatural – and even grant the bearer access to pathways between worlds. Some of these blades are frail and lack a cutting edge but are still able to be used as a weapon, even a supernatural cutting tool. They are natural conduits of magic and many of these Keyblades have been infused with it, and thus they are very effective in dispelling foes that are connected to darkness. Our main hero Sora has been chosen to be the bearer of the Keyblade of Worlds’ Hearts and can modify the weapons appearance or abilities by adding different keychains and is known to be the one that has done so the most. No one truly knows the origins of these amazing tools or even their original purpose but many legends exist of such things. 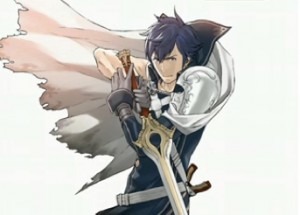 “But know this: I am no God… So do sons of man name me. But I am no creator. I posses not the powers of making or unmaking.”

Our final legendary weapon is a divine sword forged from the fang of Naga, leader of the Divine Dragons as she departed the realm of the living. The Falchion is its given name, and is one of the royal treasures of Ylisse in Fire Emblem. This particular blade is solely bound to four individuals and has been imbued with the power to slay dragons. Several incarnations of this fabled sword exist and as such bear slightly altered names and appearances. In the end, they are all widely known as the “Blade of Light”. Due to the power of such an ethereal blade, it proves to be essential in the defeat of many of the major foes encountered within the game. This blade even confers an extra benefit to its bearer, the ability to recover their HP, which has no doubt saved each one of the four heroes on more than one occasion.

– The Legend of Zelda

What would happen if you were one of those heroes? Whether chosen by a fortunate destiny or a treacherous curse, it’s up to you. The fate of the world and everything you hold dear will be destroyed if you do not succeed. You have but one chance and only one tool by your side to aide you in your quest. What shall it be, what weapon would you choose, or hope that it would choose you? What will you hold in your hands as you save the fate of the world?