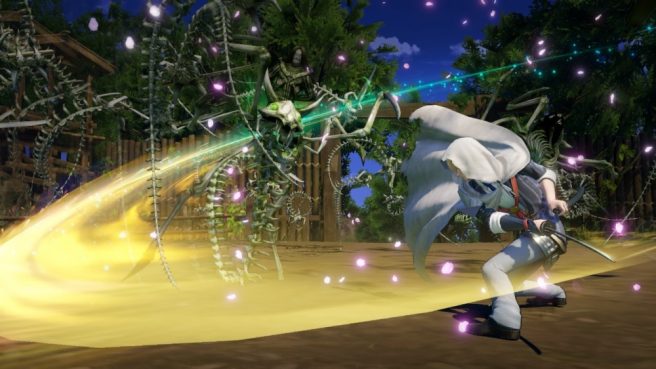 Koei Tecmo has readied a new trailer for Touken Ranbu Warriors. The game makes its debut in the west today, and the company is celebrating with a final look at the hack-and-slash title.

More information about Touken Ranbu Warriors can be found in the following overview:

“Touken Ranbu Warriors” is an action game that is a collaboration between the “spirits of blades” simulation game “Touken Ranbu -ONLINE-” presented by DMM Games and Nitro Plus, and the thrilling “1 vs. 1,000″ Warriors series of Koei Tecmo Games.

●”Touken Ranbu” is in 3D at last. Witness the most beautiful graphics in the history of the Warriors series.
The Touken Danshi characters, which will be familiar to fans of the source material, rush about the battlefield in 3D.
In addition to the thrilling action you expect from the Warriors series, you can enjoy battles with a plentiful variety of animations, such as battling together with a partner and dueling.
Experience battles with the Touken Danshi that are both fierce and beautiful.

●Fifteen blades incarnate from a drifting honmaru base set out on a historical drama in the Sengoku Era. Experience an original epic story that can only be found in this game.

Story overview:
The Touken Danshi, 15 blades incarnate who had been drifting aimlessly without a Saniwa master, are suddenly attacked by the History Retrograde Army.
After the battle, they are assigned by the Government of the Time to undertake “onslaught investigations.”
The masterless blades have no choice but to depart for the chaotic world of the Sengoku Era, whose history had already begun to be altered.

●Easy Mode has been included, so even players who are less proficient at action games can control the game easily.
Two types of controls are included: “Regular Mode,” which features the control scheme traditionally used for the Warriors series, and “Easy Mode,” which uses controls for players less proficient at action games.
The latter only requires simple button inputs, so players will be able to enjoy the beautiful actions.

View the new launch trailer for Touken Ranbu Warriors below.

Touken Ranbu Warriors is out today on Switch in North America and Europe.