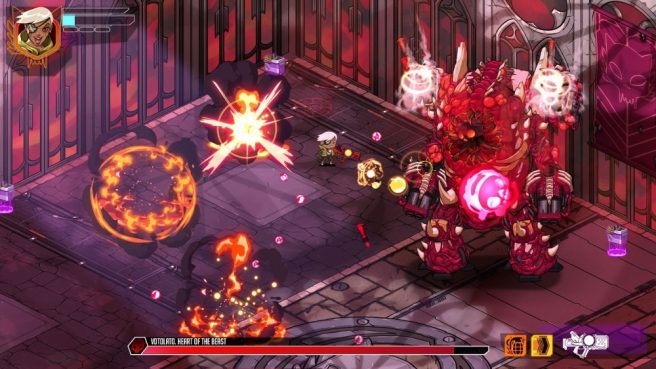 Wildcat Gun Machine will soon be landing on Switch, and we now have some early gameplay. A new video shows off 25 minutes of footage from the bullet hell dungeon crawler.

We have more information about Wildcat Gun Machine in the following overview:

Enter a bullet hell dungeon crawler where you take on hordes of disgusting flesh beasts with a wide variety of guns, giant mech robots, and cute kittens.

Gear Up – Mow Down – Get Killed – Retaliate! Over 40 gun types to choose from. Each has their own unique features like auto-aim bullets, long-range laser beams or exploding rounds with a huge blast radius.

Super abilities that disintegrate everything on the screen!
Character upgrades to suit the player’s gameplay style. Players wanting a more forgiving difficulty can increase the times they’re able to respawn, while speedrunners can upgrade their movement speed and improve their dash skill.

Have a look at the Wildcat Gun Machine gameplay on Switch below.

Wildcat Gun Machine is due out on the Switch eShop starting May 5, 2022. It will have English, Japanese, Spanish, Portuguese, French, German, Italian, Russian, Korean, Chinese (Simplified), and Chinese (Traditional) language options.