Wonder Boy: Asha in Monster World dev explains the art style and why it isn’t 2D 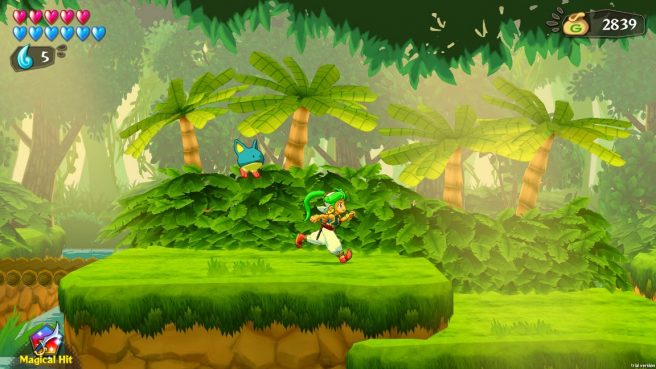 There’s been a lot of discussion surrounding the art style employed by Wonder Boy: Asha in Monster World since the initial reveal. Rather than going for a pure 2D look, the game is instead using something that many have referred to “2.5D”. It’s quite a bit different compared to other recent entries in the series like Wonder Boy: The Dragon’s Trap and Monster Boy and the Cursed Kingdom.

Speaking with Nintendo Everything, Wonder Boy: Asha in Monster World director Ryuichi Nishizawa provided an in-depth explanation as to why the team settled for this approach. He pointed to a few different reasons, such as how it can be easier to work with 3D assets and not having access to top-notch artists.

“I decided to use 3D for characters, backgrounds, and other visual resources long before I started this project. The main reason for this was that when I was working on the game’s art and graphics (LookDev), there was a higher probability that I would be able to produce higher quality work in 3D. Of course, it would be possible to explain logically why, but the main reason was that I had an intuitive conviction at first that 3D was definitely better. I don’t like to explain it because it sounds like an afterthought, but I’ll try my best (laughs).

As you know, 3D video resources are created through four processes: modeling, applying materials, lighting, and projecting with a camera. This ‘separation of processes’ is very important. Moreover, the processes other than modeling can be changed in real time while the game is running, which is an advantage. On the other hand, 2D video resources are created by professional designers who painstakingly draw lines, paint colors, and in some cases add special effects using image tools. This process is repeated carefully and painstakingly. In other words, not only the shape and color of 2D images, but also the lighting and camera are left up to the designer, and the designer’s ability is directly reflected in the quality of the image. Even if the director wants to lighten the color of the background for a test, he has to ask the designer to correct it. The director just wants to experiment a little, but it costs time and money. In contrast, with 3D, as long as the model and materials are prepared by the designer, the lighting and camera can be freely controlled by the director. You can create the images you want through trial and error at your own hand. You see how the degree of creative freedom is overwhelmingly different?

There is another reason why we chose to use 3D. During the development of this game, we were asked why we didn’t use a 2D art style like in Wonder Boy: The Dragon’s Trap. The answer is simple: that art style is not possible without three, or even five, great artists like Lizardcube’s Ben (Fiquet). Good 2D graphics can only be achieved with good 2D artists, and unfortunately we didn’t have Ben on our team (laughs).

Another thing is that 2D games have a unique UX (user experience) that cannot be expressed in 3D games. The fact that the images are in 2D is completely different from the fact that the game experience is in 2D. As you can see, this title uses 3D for the visuals, but the gameplay feeling is strongly like 2D. A quick glance at the game screen is like a so-called ‘2.5D’ style game, but unlike the usual 2.5D, it is a new attempt to take advantage of the 3D space more aggressively. This is one of the answers to the question, ‘How can we express the user experience unique to 2D games in 3D field?’ Maybe you cannot understand just by looking at it. So, please play and experience. We hope that you will be able to experience the new possibilities of 2D platform action in a 3D field.”

Fortunately, fans have started to warm up to Wonder Boy: Asha in Monster World’s art style. The latest trailer in particular has earned a much more positive response – check it out here.

We’ll have more from our interview with Nishizawa soon.