Zelda: Breath of the Wild winning Game of the Year at The Game Awards 2017 meant a lot to Aonuma 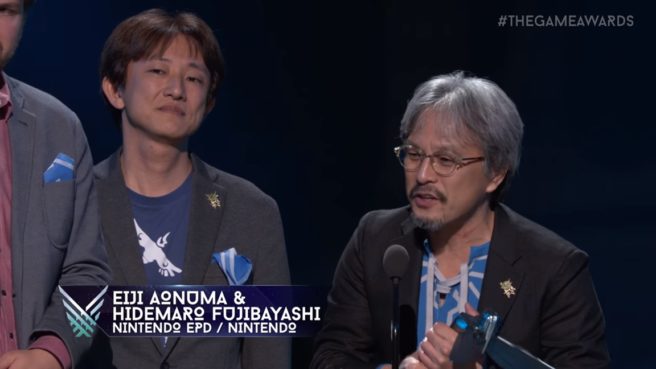 The Game Awards has certainly made a name for itself over the past few years. Millions upon millions of viewers tune in to the show for first looks at new titles and to see all of the trophies handed out. At this point, you could definitely say that it’s one of the industry’s most important events.

Out of everything that has happened at The Game Awards, one of the more monumental moments for creator and host Geoff Keighley was seeing Zelda producer Eiji Aonuma and Breath of the Wild director Hidemaro Fujibayashi come on stage to accept their Game of the Year prize. Keighley told Hollywood Reporter:

“That was a real landmark for me, personally, to see all the top guys from Nintendo in the front row and see [game director Eiji] Aonuma get up onstage and how much that award meant to him.”

After The Game Awards 2017, Aonuma reached out to Keighley to receive the “exact measurements of the award to get ready on his desk to place it. Keighley said: “It really meant so much to me to see the award, only a few years old at that point, had so much weight to it.”