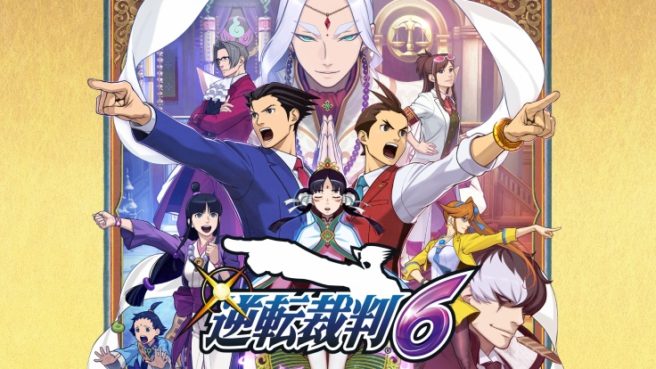 In one of its recent issues, Japanese magazine Nintendo Dream conducted an extensive interview with some of the developers behind Phoenix Wright: Ace Attorney – Spirit of Justice. Motohide Eshiro (producer), Takeshi Yamazaki (director), and Takuro Fuse (co-director) participated in the discussion.

There was a ton of talk about the 3DS game in Nintendo Dream’s interview spawning over 10 pages. The developers touched on topics like Maya’s return, ideas left on the cutting room floor, and more.

Head past the break to read up on our translation.

Yamazaki: There was a glimpse of Maya’s name also in Ace Attorney 5 and the reaction to that was amazing.

Yamazaki: We included bringing a letter from Maya. The response of players to that was amazing, so I thought that if we are going to put her into a game, we have to go all out.

ND: Come to think of it, were there any discussions of having Maya in Ace Attorney 5?

Yamazaki: There is only so much that you can do within a single title, so if Maya was in the story of Ace Attorney 5, it would exceed the limit.

Eshiro: Athena’s presence is big later in Ace Attorney 5 and it is also connected to the backbone of the story, so when we thought to concentrate on her, we had to be selective of the appearing characters.

ND: You thought to create a game that grasps players’ requests, right?

Eshiro: Yes. That is the case with Maya, but if we respond to requests the best we can, like “people want fingerprint investigation, so let’s include it”, there are more and more things…

ND: And it turned into a compilation, right? (laughs) Well, when it comes to game mechanics, originally you didn’t think about having a full serving either, did you?

Yamazaki: It originated from fingerprint investigation in the beginning. There was also the option to instead throw away all of the systems that have been created up until now… But look, wouldn’t you want to include them all?!

ND: Really all of the mechanics of the series are included, so there are no other words for it than “incredible”.

ND: Yes they are. For example, since Apollo appears…

Yamazaki: You can’t have perceiving not appear. So also for that reason we couldn’t throw away the systems.

ND: You created an outline and arranged game systems in the beginning, so because of that everything became connected, right?

Eshiro: Yes. To tell you the truth, the composition of the scenario was one of the regrets that I have from Ace Attorney 5. This also has to do with problems with the schedule, but we built the plot while creating the game, so there are things like unappealing settings and going back and forth in time. That is why we decided the story first in Ace Attorney 6.

Yamazaki: We wrote sections in each chapter by making the best use of the individuality of each responsible person, but we decided the big flow of the whole plot and made a development plan before that.

Improvements based on user comments from the last game

Eshiro: There is including examination messages. That was absolute. The reason why they were originally cut from Ace Attorney 5 is because you could examine the crime scene in 3D during 3D investigation parts. You can examine all parts of the room in 3D, in other words you can examine anywhere, so actually when it is compared to other games in the series, the amount of examinable elements isn’t changed.

Eshiro: But from the user point of view examination messages were cut except for 3D investigation parts, so it feels like the total amount was decreased. So that means it didn’t match users’ intuition of playing.

Eshiro: Therefore this time we just simply increased the amount, like “Even though this increases the costs, we won’t remove them.” Naturally we had to think about those messages to that extent also in the developer side, so it takes time and effort, but we’ll implement this properly. Therefore returning examination messages back was decided in the beginning.

Yamazaki: I’ll add a bit to that. There is one more reason why examination messages were removed from Ace Attorney 5. We created the game design based on the idea that users may finish investigation parts quickly as they’d want to go to the courtroom part. Especially Ace Attorney 5 was a new numbered title in a while, so it will probably bring in new customers as well, so we thought that it would be for the best if players’ don’t get lost in investigation parts or that they don’t take so long time that they feel like a bother, but actually that was different from what users wanted.

Eshiro: But the reception was divided. There were many people who said that the sense of quick progression is nice. However, the series has been going for a long time and fans that got into the series early on are still playing, and we realized this once again. Therefore we have to make both users satisfied with Ace Attorney 6. Although it is also important to make the new people feel satisfied, we thought to respond to complaints from users that have supported the series all along.

The game’s theme and rejected ideas

ND: By the way, what rejected theme ideas did you have?

Yamazaki: Well, there were ideas like an underground arena.

Eshiro: And later the dark law.

Fuse: Trials in the dark society.

Yamazaki: The idea was to get Phoenix into crisis by making him battle in unlawful trials of the dark society. Like “What? It is unlawful even though it is law?”

Eshiro: There were two or three rejected themes like that. At that time, Yamazaki came to show us every week, like “I came up with a theme!”, but finally he came to say, “This time it’s revolution!”

Eshiro: So when I asked “What will be revolutionized?”, it was “Phoenix travels abroad”. But going abroad was already done in Dai Gyakuten Saiban, so I asked again, “What will be different?” And then: “This time the legislative system of the country will be different. It is a story of revolutionizing that legislative system.” When I heard that, I thought: “This looks good!” Even though the aspect of a foreign country was the same as in Dai Gyakuten Saiban, that itself turned into the concept of the scenario, so that is why I thought it was OK.

ND: You decided the theme for the scenario and started to create an outline, right? So does that mean that spirit oracle was born after that?

Fuse: Originally the country wasn’t Khura’in in the beginning. After deciding the theme, we started by forming the country, like “What kind of country shall we decide on?”. We started from Asia by thinking “What kind of country would be good for a revolution?”, and we got many ideas for candidate countries. We also discussed about Europe, but that is too close to Dai Gyakuten Saiban as you’d expect, so we rejected that idea.