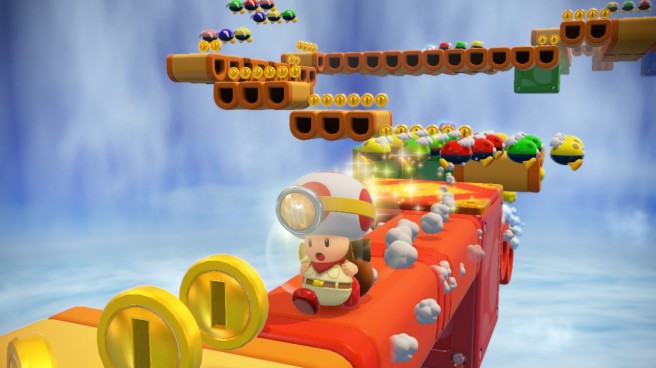 Shinya Hiratake is the director of Captain Toad: Treasure Tracker. It was many years ago that he thought about a game concept that would take place in a series of small diorama-like levels where the hero couldn’t jump. Players would move the camera around the diorama and guide the hero to the exit.

Who was the hero, you ask? Why, Link of course! Hiratake felt that if he removed the jumping mechanic from a platformer, he could greatly shrink a game’s levels. However, he believed that the concept wasn’t a fit for the Mario universe since most of those characters can jump. It was then that The Legend of Zelda’s Link came to mind.

Hiratake and a small team ended up working on a small tech demo of what a diorama-like game starring Link would look like. Eventually, it was shown to a few of the higher-ups at Nintendo.

“We must have done too good of a job with our demo, because during our presentation, Mr. Miyamoto asked us how we were planning on bringing these dioramas into production. He thought we were pitching him an actual physical product design.”

Hiratake’s idea of a diorama-like game starring Link was not given the go-ahead. However, Miyamoto seemed interested in its potential, which is how the concept ended up in Super Mario 3D World as a mini-game. Toad was chosen because Hiratake recalled that the character wore a backpack in Super Mario Galaxy and thought that he wouldn’t be able to jump since he would be weighed down.

Following Super Mario 3D World’s launch, Miyamoto approached the team again and encouraged them to take the concepts from the mini-game and expand them into a brand new, original title. “We like to think that Mr. Miyamoto finally realized the vision we had for a diorama those many years ago,” Hiratake said.