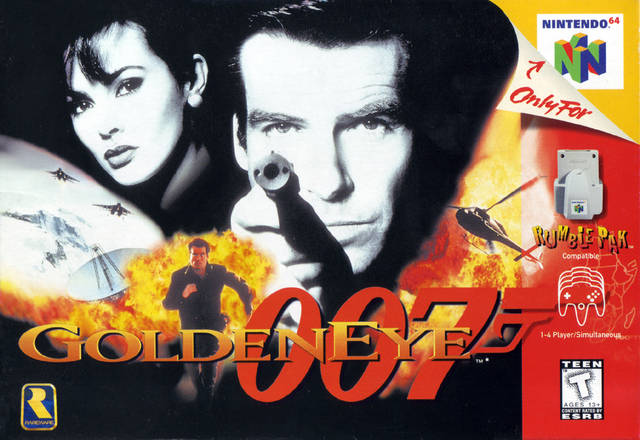 Ken Lobb might not be a name everyone is familiar with, but he had a major impact on Nintendo back in the day. As a former executive at Nintendo of America, he influenced both software and hardware.

The N64 megahit GoldenEye 007 was one game Lobb was involved with. In a lengthy interview with Game Informer this month, Lobb discussed the game in-depth starting with its origins up through release.

GoldenEye 007 started out with “a tiny team at Rare,” Lobb said. Speaking about why this happened, he explained:

“Let’s just say, the ‘bigs,’ or the more experienced Rare developers were busy. They also weren’t super thrilled about making a game with a license. The license had come from Japan, from Mr. [Hiroshi] Yamauchi. He started the negotiations for it. Tim and Chris had agreed to take on the project. But the people making Donkey Kong, Banjo, Killer Instinct – they’re all busy. So, Martin Hollis and a little group of people began working on it.

They worked in barns at the time. Rare was called the Manor Farmhouse. It was this beautiful old farmhouse with a bunch of developers in it, and all these barns that were converted into development spaces. One was for Banjo, one was Killer Instinct, the smallest one had Martin Hollis, David Doak, and the whole team behind GoldenEye. I was visiting Rare a lot, once every 8 to 10 weeks to work on Killer Instinct 2. Actually, the end of Killer Instinct and into Killer Instinct 2, while they were making GoldenEye. I developed a friendship with Martin. That had a couple, shall we say, interesting impacts…”

Many are aware that GoldenEye 007 was originally imagined as an on-rails shooter inspired by Virtua Cop. But since Lobb was adamant that the N64 should have four controller ports, he wanted Rare’s project to make use of the functionality.

“They started making GoldenEye, and their inspiration was Virtua Cop. It was literally a rail shooter. I had helped convince Nintendo Japan that we should have four controller ports on the Nintendo 64. That was fun. They kept telling me how much it was going to cost, but it definitely helped the N64. Because of that, I was trying to get as many games as we could to support four players. I was also like, ‘You’re making a rail shooter on this analog stick. I bet we could do a first-person shooter.’ And they’re against that. ‘No, no no. We don’t have time; we have to hit this date.’

They were focused on something that was cooler than Virtua Cop, because they were going after location-based damage. The first tech they did was ‘shoot them in the hand, they drop their gun; shoot them in the butt, they jump in the air; shoot them in the hat, the hat flies off.’ All that kind of fun stuff. I went back two or three times between the time I saw the game and when it was announced at the Shoshinaki trade show in 1995. I kept talking to them about how I would do the control, and half the team started thinking, ‘Okay, maybe.’ They showed the video at Shoshinaki whtout saying what the game was, and everyone who saw it was like, ‘Awesome!’

Lobb added that he “helped put in all of the secrets” in GoldenEye 007, adding that “the unlocks by time trial, that was all mine.”

One day, Lobb was called in and was shown that Rare had four-player multiplayer running in GoldenEye 007. However, the title was set to ship in just four months. Lobb was convinced that GoldenEye 007 could be big, and spoke with former Nintendo of America chairman Howard Lincoln about moving it back for extra development.

Lobb’s final story about GoldenEye 007 concerns the Klobb, one of GoldenEye 007’s submachine guns. The name had been changed a couple of times. Rare ended up settling on “Spyder”, but later realized Nintendo could face legal issues due to a paintball gun having a similar name.

“I was working super hard, whether I was there or back at Nintendo. I took a luxurious weekend off as that game was about four weeks from done to go visit my in-laws in Portland. I called [Rare] on Saturday morning to talk to Martin. He said, ‘We’ve got bad news and good news.’

We’re weeks from launch. The game has to be done. I’m like, ‘okay, what do you mean? Please tell me.’ They received a letter from Nintendo legal, saying the name of the Spyder had to be changed. It was a gun. If you have one of the first 600,000 or 700,000 copies of GoldenEye, your manual doesn’t say Klobb, it says Spyder. We already printed those manuals, and didn’t know Spyder was the name of an actual paintball gun. They didn’t want to risk it. It obviously looks nothing like this gun, but it’s a name that’s trademarked, so they wanted to change it, but didn’t have time to do a worldwide search. The name had to be unique. So Martin said, ‘We named it after you!’ The people at Rare called me Klobb. ‘So, we named it after you, is that okay?’ I was honored. And little did I know that the game was going to do great. I had no idea it was going to be what it was. The little letter from legal ended up having a nice impact on me, personally. It was appreciated.”