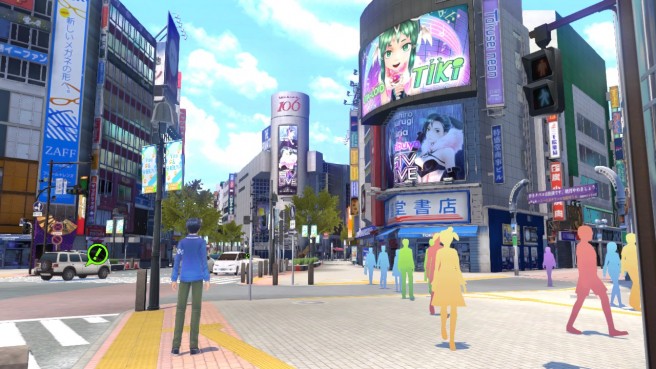 Ando: Itsuki-kun is an ordinary person, so the flow came to be “he comes to know various things about the world of show business one thing at a time = the player learns things about this world”. I think it also makes it easier to receive the new elements.

Takata: It was a problem how the story progresses after entering the office… It is probably easy to go with a structure of supporting the growth of your partners while mastering your own abilities, so that was the outcome. Wasn’t the first proposal [for the role of Itsuki] a producer?

Ishida: It was a manager.

Ishida: Well, Itsuki is a rare main character for an Atlus game as he is relatively active in chats, so perhaps a protagonist like, “I’ll become a rock star!”, would have worked as well.

ND: If Itsuki-kun was a character like that, the image would change quite bit.

Ishida: Yes. But the player takes part as Itsuki in the game, so I thought it would be better to have a character who has a bit closer point of view [to the player] so that you can project yourself, rather than having a grand dream which is quite remote for the player. Therefore we thought along the lines of a manager or a producer, but even that is a bit different, I think.

ND: By the way, there are spectators in the battle stage, but what kind of people are they?

Ishida: The impression is that enemies are spectating. At first they were made to look like the dead, but even so they gave a feeling “What are these?”, so in the end they turned into their current form.

ND: They are cheering, so they’re in quite high spirits, right?

Ishida: They came to this world as they crave for Perfoma, the so-called “symbol of performing arts”. It isn’t a matter of being an enemy or an ally, so I thought it’d be nice if they watched and cheered in high spirits.

Takata: It is like they react unintentionally when they sense Perfoma.

ND: You can also get money and items which feels like ohineri [coin offering wrapped in paper] when performing a Session combo attack.

Ishida: In the beginning there was a time when ohineri really came flying.

Ishida: Like, “Hey, you!” (laughs) We even created it so that every time you did something, [ohineri] came flying.

Takata: On the Atlus side we simply called that “ohineri system”.

ND: Even the current form feels like ohineri (laughs). In RPGs it is a mystery why you obtain money from slain enemies, but in this title it is understandable that you get money from battles.

Yano: When talking about the performance direction, we had more ideas in the beginning. There were things like a battle starting with a clap of a clapperboard by an assistant director.

Ishida: We even had a 3D stage assistant character.

Yano: But when we tried making that, the direction was too long as you’d expect, so it was scrapped.

Ishida: We also had an idea of the camera flying a lot around the battle stage, but it mixed things up, so too troublesome things were removed and in the end it turned out in this form. There was also a system in which booing occurs on failures, but that simply isn’t pleasant while playing, so it makes you give up (laughs).