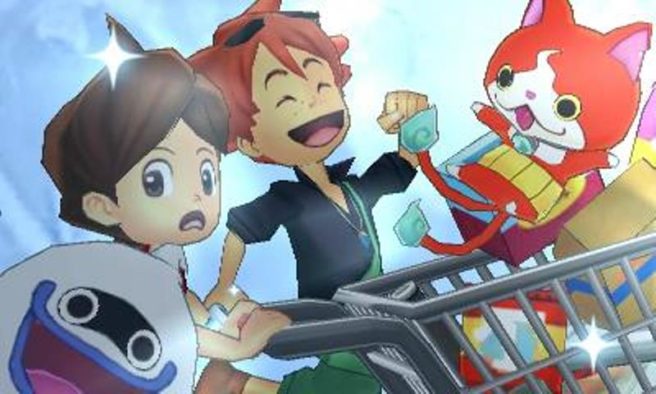 Level-5 recently updated the Japanese website for Yo-kai Watch 3. Plenty of information is included on the different pages.

Nathan Adams’ story is in the USA. Here, he meets a boy named Mack who has some great skills. Apparently Mack is the kid in this country who can also actually see yo-kai by himself.

Inaho’s story is in Japan, and she forms a Yo-kai detective agency that aims to solve Yokai-related problems. There are also various plans like building a rocket. New bosses will be appearing in Japan as well.

The stories between the USA and Japan are also connected. Mysteries that happened in the USA are being reported in the Mystery Magazine Nu in Japan, so people there can also follow what’s happening in the USA.

In Yo-kai Watch 3, various mysteries are happening in the USA. These include:

There’s also a yo-kai that administers all of these mysteries named Miss Tery. The player is tasked with solving these mysteries which are also keys to the storyline. Nathan will be accompanied by Mack in his adventures in USA. For example, a Zombie Boss that looks like Superman appears in a supermarket at night.

Dream Link is a new feature in Yo-kai Watch 3 in which players can use medals outside of the watch by changing core parts. The core part in the Yo-kai Watch Dream can be removed and re-attached into another new item, the Yo-kai Blaster, which looks like a toy gun. Based on the yo-kai medal inserted, the blaster can shoot different types of bullets. The page currently teases that there are more items compatible with Dream Link other than the Yo-kai Blaster.

USA also has its own Yo-kai Gacha, which will spawn more American yo-kai if compared to the one in Japan. These gachas are located in secluded places like in the middle of a forest.

In the USA, Nathan can explore rivers by using a raft. On the raft there will be various obstacles like eating suspicious fruits, bracing for storms or avoiding alligators. Nathan can start traveling on the river from a dock located next to his secret base. The final destination will depend on how well he controls his oar.

Players can control the oar by using the touchscreen to move it to the left or right. The raft can also be customized to raise its stats, allowing for further journeys. Customizable parts include: body, oar, sail, and accessory affected stats: endurance, control, and speed. There are also three skills that can be activated based on the equipped parts.

Differences between the Sushi and Tempura versions are so far only introduced to be different yo-kai that appear. However, it will be possible to trade yo-kai between the two versions.

Below are a bunch of screenshots from Yo-kai Watch 3: