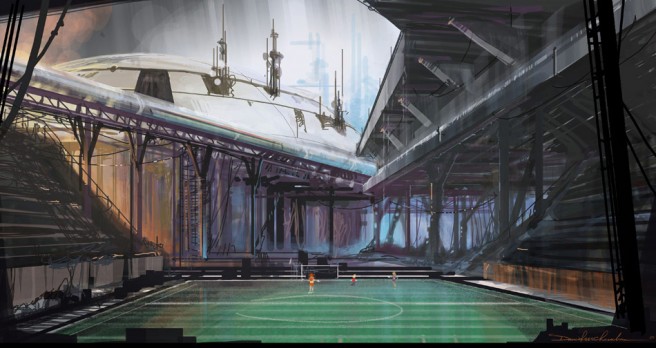 Unseen64 has collected a bunch of concept art from Mario Strikers Charged as well as information about scrapped concepts.

Here’s a summary of some of the more interesting points:

– “Ball launchers” were considered at one point as an aesthetic addition to levels
– These were machines that would have propelled multiple balls up towards characters during mega strikes
– The iconic metal football featured in the game went through 12 reiterations and became simpler over time
– Characters in armor was decided on partway through early beta development following experimentation by concept artists
– Before this, character models were drawn much in the style of Super Mario Strikers (fairly standard football kits)
– At one point, the artists toyed around with the level of armour each character would have equipped and other details
– It is possible that that the game had some alterations made to its initial stage selection
– Concept art includes an unnamed stadium set inside a futuristic city; scrapped for unknown reasons
– Next Level Games discarded the concept of playing field set on top of an enormous aircraft
– Some minor adjustments were made to the final stadiums over their first visualizations

You can find a bunch of concept art from Mario Strikers Charged above, and lots more information here.