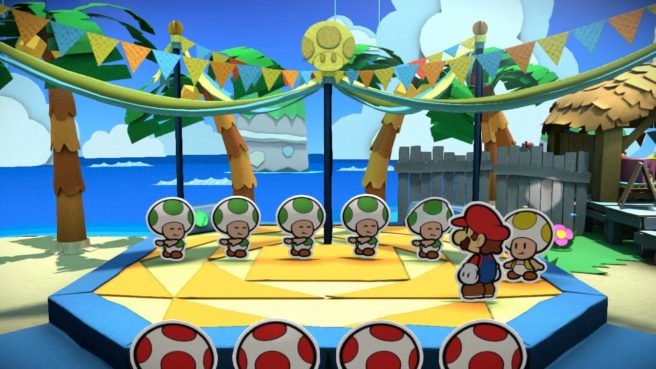 Paper Mario’s first two games featured many original characters and party members with original abilities. However, since then, the series has been moving away from that. It is especially evident in Color Splash, as many of the characters encountered are Toads.

Game Informer spoke with Kensuke Tanabe, the Wii U title’s producer, in this month’s issue. The magazine started out by asking why old NPCs from the early Paper Mario games haven’t returned. Tanabe replied with the following:

“Mario is not an IP that I created. From the position of someone borrowing the IP, I think it’s only natural to show respect to the person who created it, and let that feeling of respect guide us. When Miyamoto-san, the father of Mario, asks us, ‘Could you make a game with only characters from the Mario family?’ I think it’s only natural for us to give it our best shot. In other words, we are not currently thinking about returning to old NPCs.

Incidentally, I do think Color Splash may have proven that we can still make a game entertaining, even if our original characters don’t appear as NPCs. And with that belief, we will keep on continuing to do our best.”

Game Informer did press further, and asked if any consideration would be given to bringing back companion characters with their own abilities in the future. Tanabe said in response:

“Personally, I don’t give much thought to how we are leaving old methods behind in any series, not just Paper Mario. I always prioritize thinking about how we can build new methods and new elements. Of course, there were some series where we have not made big changes to the systems, but sometimes that’s because we feel as though these systems haven’t been perfected yet, or the gameplay can be expanded even further. We felt both of those things in Color Splash. However, I do feel as though we reached the end of where Color Splash is headed, so if we get the chance to continue the series, I think we’ll want to create a Paper Mario with a different system.”