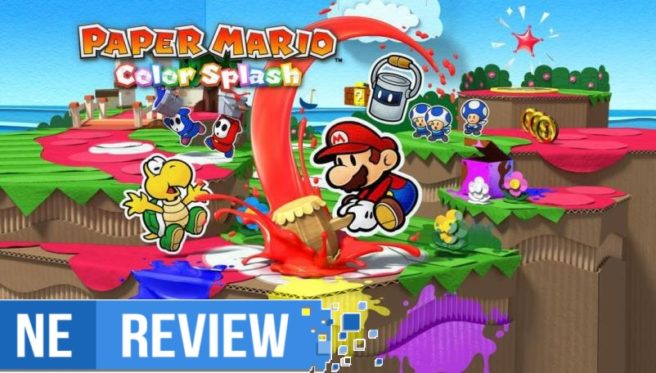 To a certain degree, Paper Mario might just be the most popular spin-off series that the overall Mario franchise has spawned. What Paper Mario lacks in number of titles, it more than compensates with its fleshed out and devastatingly charismatic worlds – for the most part. Home to some of Nintendo fans’ favorite titles, it’s no understatement to say this collection of games might just be one of the best the big N continues to put out, which is why it so confusing they haven’t been treating it that way. With a more than all over the place prequel on 3DS, Color Splash brings this series back to the home console, and hopes to right the wrongs Sticker Star caused. Now, despite looking, feeling, and sounding just like Sticker Star 2, rest easy, because Paper Mario: Color Splash is anything but.

The game opens up with a beautifully animated cut-scene that lays down the groundwork for the story to come. Mario and pals receive a mysterious letter on a dark and stormy night, and upon opening it find it’s a Toad tragically drained of all color. Following the return address, they find themselves at Prism Island, a once colorful vacation hot spot that isn’t nearly the rainbow of a town it was once known for. A mysterious being kidnaps the princess, and Mario and his newfound partner, Huey, set off on an adventure to end all the monochrome devastation. While not quite being as lore-rich as the best entries the series has to offer, Color Splash still provides an intriguing plot that left me curious enough to feel more and more motivated to travel the world the deeper I progressed. That’s due in part to the incredibly hilarious writing, but I can’t deny the mystery of why and how everything was happening the way it was had me hooked.

The story itself tells a fun tale that when stripped to the basics would’ve been just alright, but what really brings out the narrative is the downright fantastic writing. Never in my life have I straight-up laughed out loud from a game as much as I have with Color Splash. Saying the Treehouse localization team has put out their best work would be putting it mildly, as I can’t stress enough how consistently funny and charming each piece of dialogue was. You’ll find yourself talking to all NPCs and seeing what they have to say, and even caring for all the generic-looking Toads as their vibrant personalities almost make you forget that they look like everyone else. Even Huey has something quirky to say just about everything. For a world so ironically 2D, the game’s characters sure aren’t. 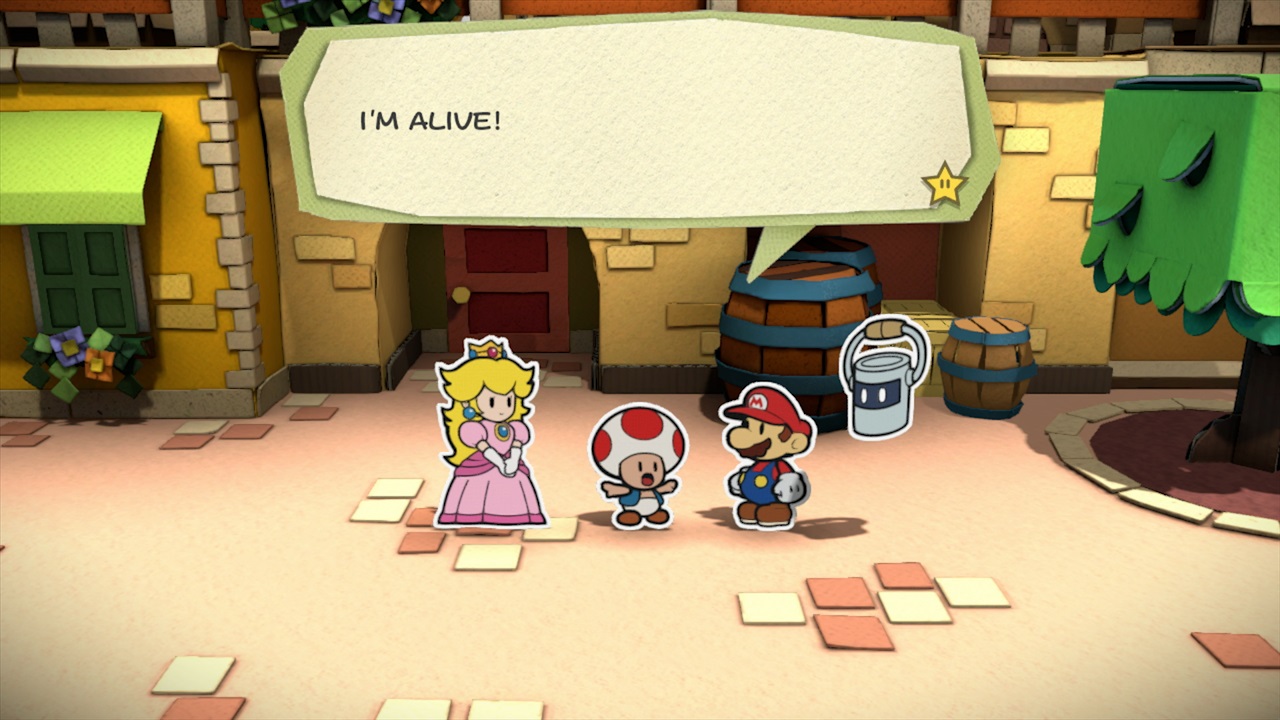 Speaking of 2D, as the name implies, Paper Mario himself and the world around him are all made up of basic materials you could find in an arts and crafts store. Characters and the land that surround them are all creatively crafted by cleverly folding paper and cardboard and all things in between, and never has this style looked more beautiful than its Wii U iteration. Everything pops and the developers, once again, find more ways to take this concept that one extra step. You don’t think you’d be blown away by how realistic they could make paper look, but you will be sadly mistaken.

However, aside from having beautiful landscape, unlike that of most Paper Mario titles, you’ll only mostly find Toads as characters. On a small scale, that doesn’t seem so bad, but in the grand scheme of things you start to grow tired of the constant array of different colored Toads. The writing does help add variety to these characters and give them more spunk, but, rarely, it begins to just not feel like enough.

If I did have to choose which Paper Mario title the gameplay mostly resembles, I would have to say Sticker Star. That may scare you off, but hear me out, because it’s not as bad as it seems. Encountering and partaking in the 2D RPG-style battles have finally been returned to their former glory as they’re actually worth taking part in. You receive better cards, more money, and items that help increase the total amount of paint you can carry for winning, and even could nab a battle card that summons a defeated enemy to help attack your foes. You’ll want to actually go out of your way to take on foes, and won’t find yourself constantly taking every path just to avoid them. Plus, I can’t deny that using the GamePad to fill and slide the cards to the TV actually did add just the right amount of interaction to make battles just feel more fun. 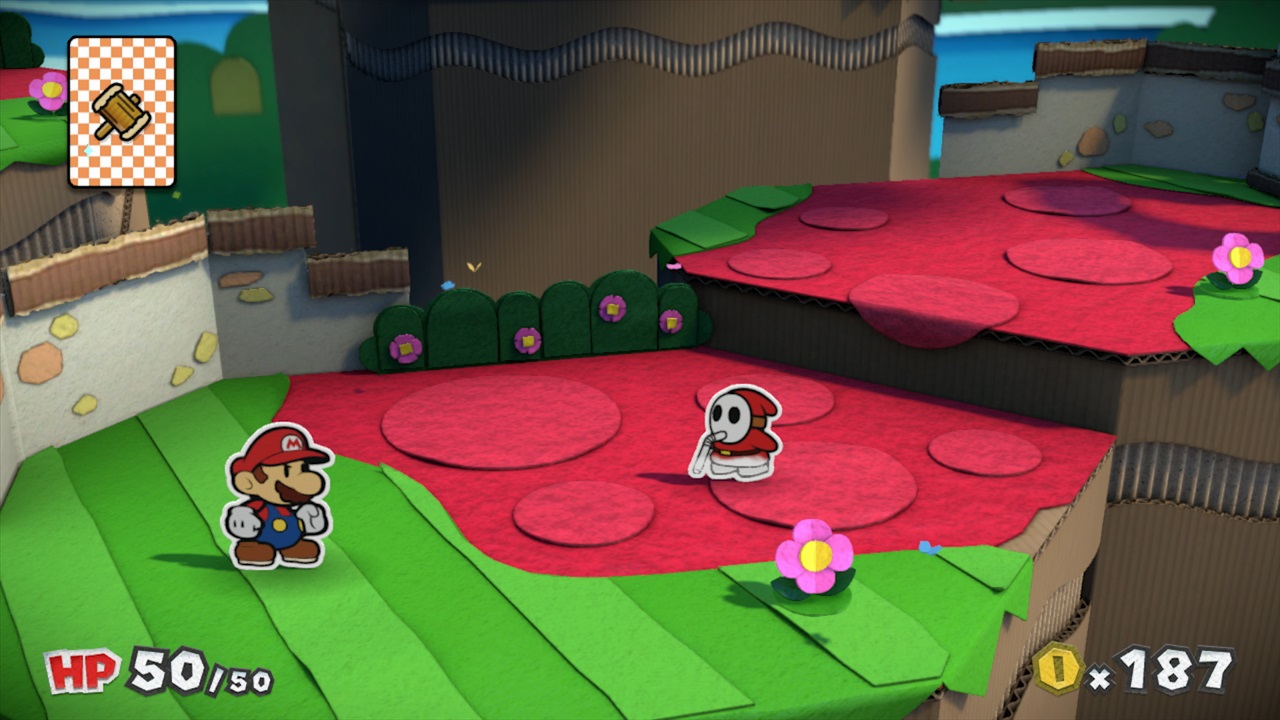 While not in battle, you’ll follow Paper Mario and Huey around the levels filling in all empty spots using your new Paint Hammer and helping Toads solve their everyday problems. Traversing the stages was always fun, rare to the few outcasts, and never followed the trend most Mario games do. Not at any point will you find yourself walking through the standard plains, desert, and underwater levels you’ve seen a thousand times over. Instead, you’ll visit a haunted hotel, a huge coliseum, trapped filled dungeons, and so many more. The constant change in tasks I had to tackle was always so refreshing. Some of the problems I found myself having to fix included finding a professor’s lost pet, setting up a tea party for ghosts so they could move on, and discovering the conspiracy behind a poisoned park (I won’t spoil why the park was poisoned, but don’t be surprised if you see Birdo perform a concert at one point.)

Following suit of the previous entry, Color Splash uses the world map travel system and has you tackle the main quest one chunk at a time. Honestly, it would’ve been nice if we could move between the areas seamlessly as they’re all clearly designed to be that way, with it sometimes feeling like a whole level was split into two for the sake of just giving off the impression of more content. Something else I’m not a fan of is that the map opens itself to what seems to be different paths that would allow for non-linear progression, only to have every area blocked off except the one the game wants you to go. Basically, the map creates the illusion of self-directed progression but provides none of that. To me it just felt like the development team didn’t know which way to go. 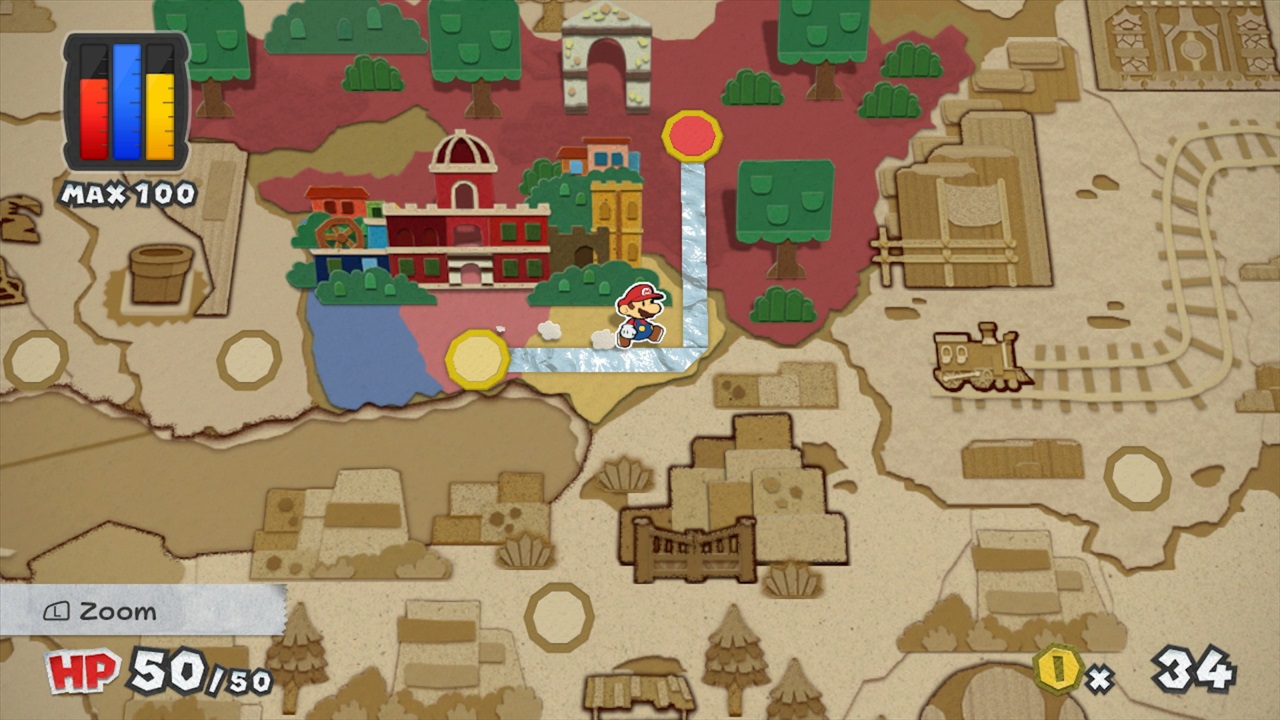 Finally, something I didn’t expect to love as much as I did is this game’s soundtrack. Its mainly jazz-inspired music does bring back memories of Super Mario 3D World, but this is still very much a beast of its own. Each level feels perfectly accompanied by a tune that fits the theme and circumstance perfectly, and doesn’t shy away from trying anything new. There’s a level where you travel an archaeological digging site that has some low rock music sounds that I still think about when I’m away from this game. The sounds always managed to captivate me, as even songs like the battle theme would constantly get me excited to fight once again.

Paper Mario: Color Splash has managed to invoke a feeling in me that I haven’t felt in very long. I spent most of my free time playing the game and loving mostly every second of it, and my time away from spent thinking about the hilarious dialogue and beautiful landscapes. Despite a few flaws, I became so invested. Maybe it’s bias, maybe it’s just cause I was feeling it – I can’t say for sure – but what I can say for sure is that Paper Mario: Color Splash finally gave me that feeling I felt while exploring The Thousand-Year Door or the N64 original. It’s not the game we expected, but it is so much more in its own special way.

Paper Mario may only be able to satisfy all fans of the series by bringing back the old battle system, reintroducing partners, and basically just remaking the first two entries. As awesome as that would be, that’s not what Color Splash is going for. Instead, we’re provided with a gorgeous game, both in visuals and in writing, that has a fixed battle system and enough content to last you a good 40 hours.