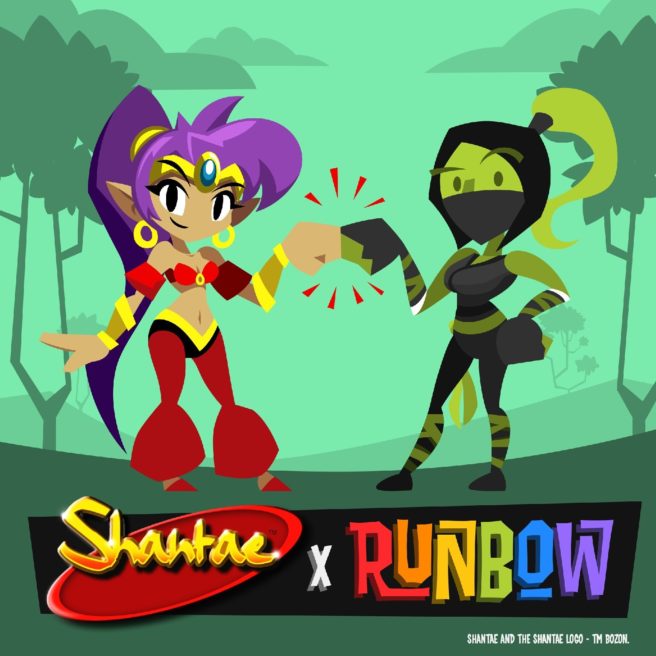 13AM Games took to its Tumblr page today and shared a bunch of information about Runbow. The game originally debuted last August, but the company has been developing a New 3DS version alongside a retail release for that platform in addition to Wii U.

Speaking of Wii U, Runbow will be out physically on October 25 in North America. It will be accompanied by the final patch including Shantae as a playable character – entirely free.

13AM Games is still tinkering away on Runbow for New 3DS. There were some difficulties along the way, including the implementation of online play, so we’ll now be seeing the portable version in Q1 of next year. Internet connectivity is also taking the focus as opposed to local play and StreetPass.

Here’s the full news update from 13AM:

Q: So when is Runbow Pocket coming out?

Development on Runbow Pocket, especially the online functionality, took a few turns we didn’t quite expect. Rather than rush out a game that we didn’t feel was up to our standards, we decided a delay would be better if it meant we could focus on improving the quality of the game itself. We will have a clearer release date towards the end of the holidays, but we can confirm that Runbow Pocket and its physical retail version, Runbow Pocket Deluxe Edition, will be launching day-and-date in early 2017.

Q: Can you tell us how networking features will work in Runbow Pocket?

We’ve said in interviews that we wanted to wait until we were sure about how Runbow Pocket would let you play with other players before we confirmed anything, and now we can! Runbow Pocket will use an Online Networking system, just like the original game. This means anywhere you can get on Wi-Fi you can play Runbow Pocket with people all over the world. Run, Arena, and King of the Hill will be available in both open and private games. So you want to try your luck against people all over the world? Go for it! Want to play a quiet, private game with your friends? We’ve got you covered. We will speak more about specific player numbers in the coming weeks, but we’re really excited that we get to finally confirm this news with you.

Now, making this system a reality meant focusing on Online connectivity over the New Nintendo 3DS’ Local connectivity. While this now means no Streetpass or local multiplayer, focusing on Online Multiplayer will allow players to have more options about where to play, when to play, and who to play with. It was important to us that Runbow Pocket players still have the option to play this crazy multiplayer game with other New Nintendo 3DS owners anywhere in the world, whenever they want. On top of this, Runbow Pocket still has the same massive single-player Adventure, Bowhemoth, and you can even add on Satura’s Space Adventure DLC to give you all the Runbow fun you know and love, on the go.

Q: Wait… but what does this mean for the release of the Shantae DLC? Wasn’t she supposed to come out with Runbow Pocket?

A: Runbow’s final patch, featuring brand new FREE DLC of Shantae as a playable character will be coming to Runbow Wii U in time for the release of the retail version of the game, Runbow Deluxe Edition!

We don’t want to stop you from being able to play as your favourite Half-Genie Hero, so we made sure that Shantae, as well as the final patch content for Runbow on the Wii U, were ready to go for the moment that Runbow Deluxe hits shelves. Thanks a lot to our friends at Wayforward for helping make this wish a reality.

Q: Hey, when IS Runbow Deluxe Edition hitting the shelves?

A: Runbow Deluxe will be available at major retailers across North America on October 25th.

Thanks to the help of our partners at Nighthawk Interactive, Runbow Deluxe will be ready for retail release on October 25th, in store and online, all over North America. The game is available for Pre-order right now on Amazon, Best Buy, and GameStop online stores. Remember, for $29.99 you get Runbow, all of Runbow’s DLC, and the Runbow Official Soundtrack Volumes 1 and 2 (a 42 dollar value!).

If you’ve experienced any trouble with pre-orders on Amazon.com, rest assured, we are working on figuring out if they have been re-instated. BUT, while we figure that out, so long as Amazon hasn’t charged you for the pre-order, we recommend pre-ordering again to make sure your copy is ready on October 25th. We’re sorry about the inconvenience, but we have been promised that everything should be sorted out.

If you’re still having issues that we haven’t covered here, please let us know at[email protected]. We are here to help!

Q: Wow, thanks for all of these updates.

A: That’s not a question, but you’re welcome!

Thank you all for your continued support and excitement about Runbow, Runbow Pocket, and Runbow Deluxe Edition. We hope this little announcement reminds you that we are working round the clock to make Runbow an awesome game for our incredible fans.

That’s all for now, but without spoiling too many surprises, we want you to know that we’ve still got a little more in store for you, Runbow fans. Be sure to stay tuned, and stay running.