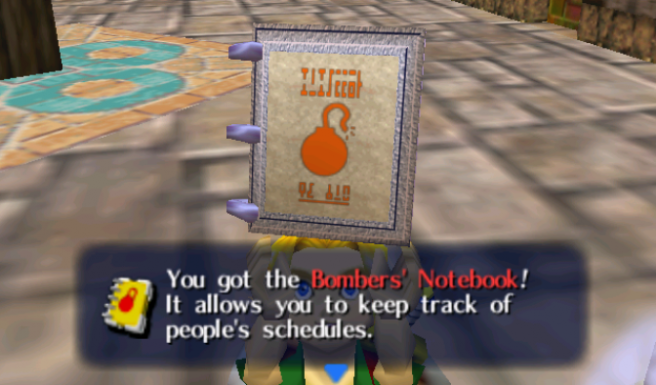 For those who haven’t experienced the original, the book can be used to keep track of different quests. Players can obtain it fairly early on.

Aonuma shared the news about improving the Bomber’s Notebook in this month’s issue of GamesMaster. As it turns out, it was Shigeru Miyamoto who suggested that the book be redone so that players would be more aware of the “hidden events” included in the game.

We were told by Mr. Miyamoto that he felt there were a lot of users who finished the original without even noticing all the hidden events scattered around the town. He said that he wanted us to make sure users were more aware of them this time around.

According to Aonuma, the Bomber’s Notebook now makes use of the 3DS’ dual screens. It has been remade “to act more like an electronic notebook that leads players to these hidden events,” he said.

Aonuma also spoke with GamesMaster about the benefits of bringing the Majora’s Mask experience to a portable system.

When the game was launched, I believed that the real purpose was for players to overcome this pressure and experience a sense of achievement. On a portable console, users don’t have to choose when or where they play, they can keep on playing the game whenever they want. I think this should allow all users to enjoy that special sense of achievement.

The Legend of Zelda: Majora’s Mask 3D will be released this spring.