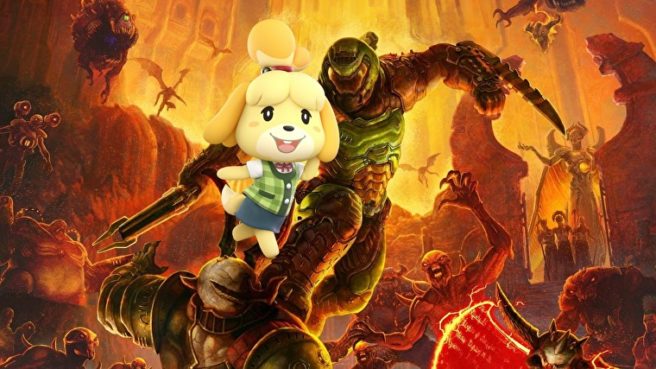 IGN recently spoke with Animal Crossing: New Horizons director Aya Kyogoku and producer Hisashi Nogami. During the interview, one of the topics discussed was the collaboration art that fans have been making for the new Switch game and Doom Eternal. These two titles technically only share the same release date, but the internet has really run with the idea of Animal Crossing and Doom coming together.

“I definitely do notice and have noticed that there’s a lot of Doom and Animal Crossing collaboration art and illustrations that are being posted, and as I look through them I’m in awe of how much creativity our fans have.”

“I think because there is a common denominator of this type of communication happening between Doom and Animal Crossing fans, and also the fact that Animal Crossing is a communication game, we’re very thankful and very thrilled to see all this. We’re so excited at the same time to see how the two [fandoms] are coming together to celebrate this day.”

Although the genres are very different, Nogami said that Animal Crossing and Doom are similar in that “they’re both video games, and come from that same subculture so to speak.” Nogami added that he thinks it’s “so great to see that these two different [fandoms] are coming together and hyping up the gaming [community] and gaming culture itself,” before calling it “a great thing to see.”