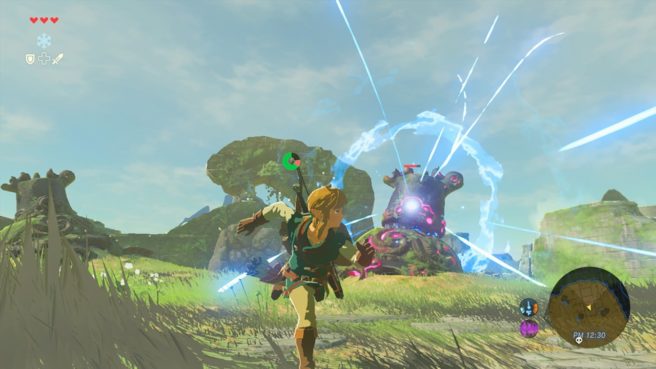 IGN recently published an article about Zelda: Breath of the Wild which contains comments from producer Eiji Aonuma. Aonuma spoke about the world and how getting lost can be fun, rupees’ role, the subtitle, the special arrow shown in 2014, and Link’s green tunic.

We’ve rounded up Aonuma’s comments below. You can read IGN’s full piece here.

“We talked a little bit about the idea of density, how dense to make this big world.” – Aonuma

– The team realized that filling the vast landscape with things to do and explore would be a lot of work
– As the team experienced moving around on horseback or climbing up to a high place to paraglide down, they realized that their desire to see what’s ahead of the next horizon grew
– At the same time, the team realized some moments should be subtle as you explore

“We realized that it’s OK if there’s pocket of emptiness.” – Aonuma

On how Aonuma learned that getting lost is fun…

“In previous 3D titles, I thought that getting lost is a bad thing. Getting lost in those small worlds, it’s not a loss of what to do but it’s more of a directional loss. I see the exit, you’re going to end up at the same exit, but I can’t figure out how to get there.”

“Challenging something in a way that ‘I think this is going to work’ and then discovering that ‘Oh, this isn’t going to work,’ it’s not actually that much of a painful experience. It’s actually fun. It’s a sense of discovery and as we’re developing this, I thought to myself, “Maybe this is what it means to create a big world, to find out that getting lost is OK.”

“Rupees do exist, but the reason for their existence is a little different this time around. As you saw it’s not about going to cutting down grass and collect rupees or find them in treasure chests but it’s about collecting things and going to sell them and then using the rupees you get to buy new things.”

“Even the subtitle itself is different from previous Zelda titles. Really the world is the main character.”

– Past games would use item names like Skyward Sword or character names Twilight Princess as the subtitle
– Aonuma worked closely with Nate Bihldorff from Nintendo’s Treehouse over the span of many months before they landed on the name, Breath of the Wild

“It took a while. We talked a lot about plot points and items and characters, but what we kept coming back to was that the world itself is really the soul of this game. The ruined, crumbling masonry and the quiet field with a breeze running through it. The sense of melancholy that pervades this place, what was once a beautiful kingdom is now fallen to ruin really felt like the soul of the game to us.” – Bihldorff

“That arrow is definitely an important part of the game, and getting it is very important to navigating the game. To reveal it now would be a spoiler so I don’t want to say too much.”

On what happened to Link’s green tunic…