Posted on November 6, 2019 by Dennis(@LyonHart_) in Reviews, Switch, Switch eShop 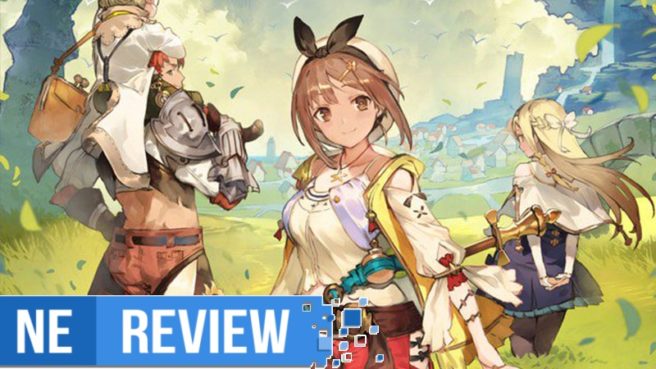 With yearly releases, certain franchises can sometimes grow complaisant and acquiescent when there’s a formula that works and becomes a signature, almost symbolic, to an IP’s legacy and name. In the case of Atelier, you know what you’re getting into with its slice-of-life approach to story, turn-based gameplay, fantasy world, and magical recipes. It’s what made Atelier what it is today with likeable protagonists, wholesome stories, and the chance to feel young and free. Each entry usually has a bunch of small tweaks that make up a larger whole that cause the games to feel distinct from each other despite the core approach effectively being the same, but when Atelier Ryza was shown earlier this year, you could tell right away that this was a big leap not only from Lulua, but from Atelier’s general direction as a whole. It still looks like Atelier, and it still feels like Atelier, though time and effort has clearly been made here for a new chapter and life that brings with it a fresh coat of paint, a new battle system, more intuitive interfaces, and just an overhaul of gameplay features and quality-of-life tweaks. All of these elements make Atelier Ryza: Ever Darkness & the Secret Hideout not only the best looking Atelier to date, but one of the most refined and refreshing entries in its history of over two decades.

Atelier Ryza still retains its usage of alchemy and gathering materials for most of your journey at a relaxed pace in a world that undergoes day and night cycles, causing multiple events to occur during certain days and times throughout the calendar. However, Ryza herself is different from most of the other protagonists in Atelier games of the past – she’s just a regular farm girl with no knowledge, history, or bloodline of alchemists. So how does someone like her even find herself in a situation where she can even conduct methods of creation or acquire the skill to do so? Ryza is a bit of a rebel, and after becoming bored of a daily routine she finds mundane and a lifestyle with very little excitement, she drags a few friends along (with some persuasion) to go out of her village and simply explore. She admits that she’s not sure what she’s getting herself into, but it’s the fact that everything is so new and unknown that excites her so much, and having her friends by her side (no matter how ill-equipped) keeps her happy and determined in their success of… well… she’s not so sure – but it’s okay!

It’s a new world with new possibilities, though it doesn’t take long after they steal a small boat to go to a neighboring location where Ryza and her friends Lent and Tao find themselves in a bit of a conundrum. They’re cornered by a powerful beast that one-shots your entire team with no chance of even remotely fighting back. Realizing the mistake they made, outmatched, when Lent makes the choice to protect Ryza and Tao despite being heavily wounded, a strange duo appears knocking the beast out in one hit (karma, surely), and coming to the aid of Ryza and her friends. From here on they serve as mentors of a sort to Ryza and co., fascinated by their abilities, and her affinity for crafting and alchemy shoots up tenfold as she begins to uncover the secrets of this newfound skill with a seasoned alchemist who’s willing to help teach Ryza as a subordinate. 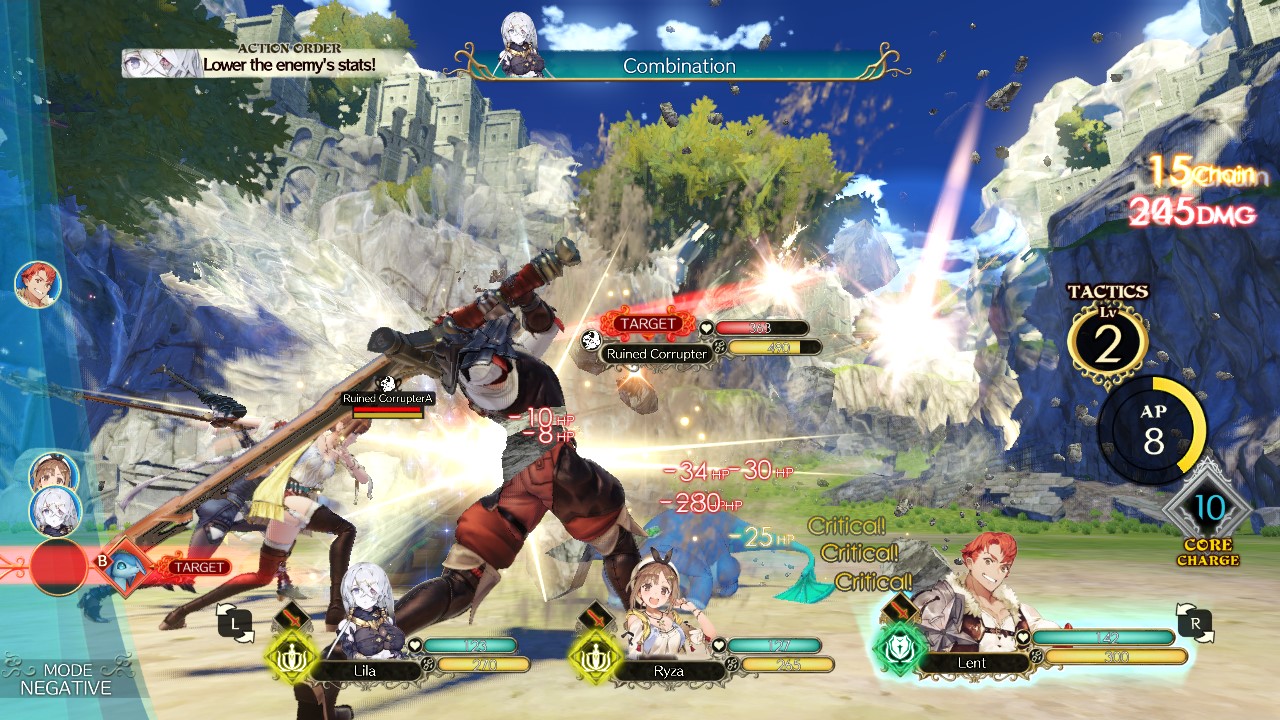 As you venture through Atelier Ryza, you’ll meet plenty of new friends and acquire new party members along the way, all with their own special set of skills and uses that will give you the chance to customize and prepare as you see fit. A variety of armor, potions, bombs, materials and the like will be at your disposal through various shops across town and via your alchemy training, which grows in level and adequacy the more you concoct. Making sure you create as much as possible through your alchemy has always been a key part of the Atelier game, and despite Ryza’s infancy in the subject, it’s no different here as she tries to learn as quick as possible thanks to her excitement being her driving force.

Atelier Ryza, as stated earlier, has a lot of changes to it that make it stand out from previous entries, and one of its biggest focuses, alchemy, is yet another one of these overhauls. Anyone who’s familiar with Atelier knows the usual way of going about creating a recipe by essentially just picking the target item from a list and selecting the necessary materials from another list until you’re basically happy with the quality, effects, traits, and amount you’d like to make for the recipe in question. It’s always been straightforward (and can get borderline addicting), providing a simple way to craft and create without the screen becoming too busy. Atelier Ryza, however, has a beautiful Synthesis Tree that’s a lot more visual this time around, providing a more in-depth look at exactly what you’re making, how you’re making it, the items you’ve used, how the quality and effects influence the recipe, and if you can even discover a recipe within the recipe by slightly altering ingredients, known as Recipe Morphs. 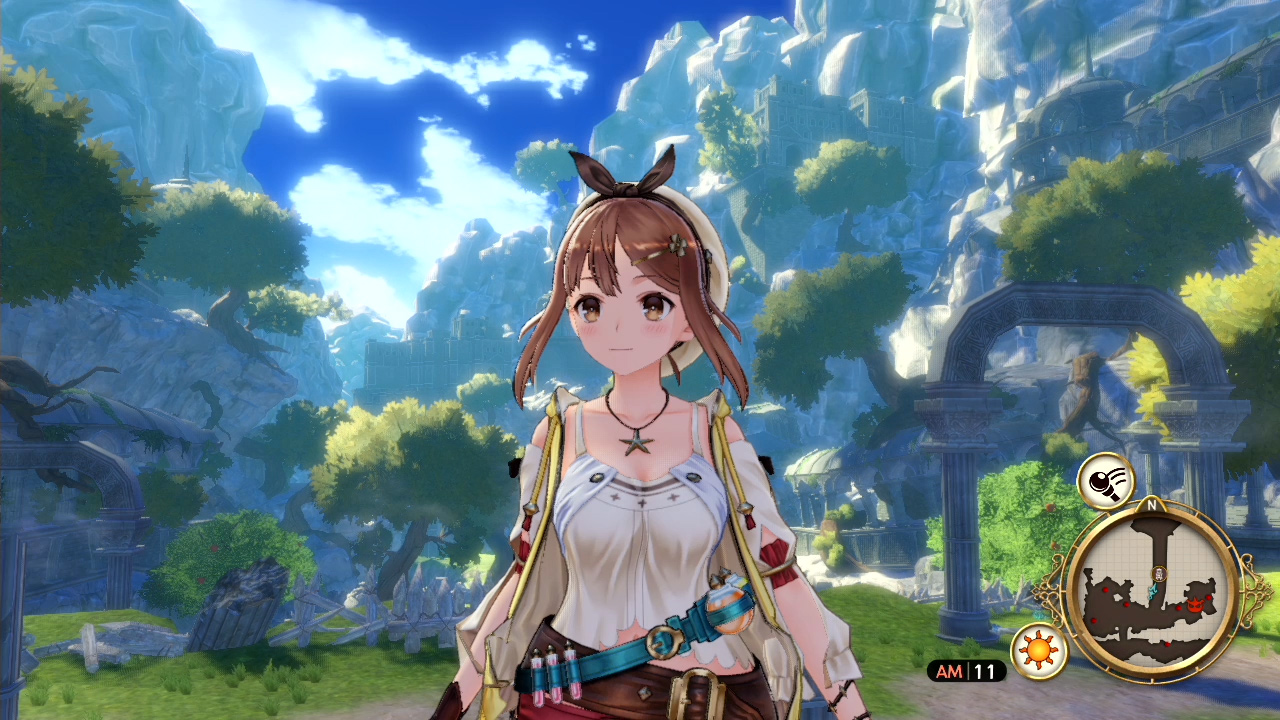 Each tree is comprised of Material Loops which serve as a visual representation of each ingredient you’re adding to a recipe and how, if you’d like, enhancing that particular material could influence (for better or for worse) the recipe as a whole. It’s an in-depth but intuitive way of really having more control over what it is that you make, versus consuming materials over and over again as you experiment trying to get a buff on an item you want. These do have restrictions, however, as each recipe dependent on your level can only use so many items, so don’t expect to make extremely powerful bombs by unlocking every single stage of a material loop in a tree any time soon; it’s costly in materials but also keeps the game balanced. At first when I saw how the new system of learning and crafting recipes worked, it felt a little daunting, but after doing it two or three times you begin to realize how it’s actually for the better, though admittedly I had no issue with how it worked before. This, much like many other things Atelier Ryza has done, is a change for the better.

Recipes aren’t just found through messing around with the items you have, but can be acquired through shops, quests, story progression, and even treasure chests, so outside of gathering, exploration is always complementary to an alchemist’s work when wanting to grow and become better in and out of battle. The idea of being “new but familiar” rings true in Atelier Ryza, with its combat taking a more real-time approach compared to its more traditionally turn-based predecessors. By no means will you be running around hacking and slashing away, but enemies won’t wait for you to go ahead and make a move either. Atelier Ryza implements a new ATB-esque system (an interesting blend of Final Fantasy XIII, Child of Light, or Chrono Trigger) that requires a little more improvised thinking and reflexes to assure you leave victorious.