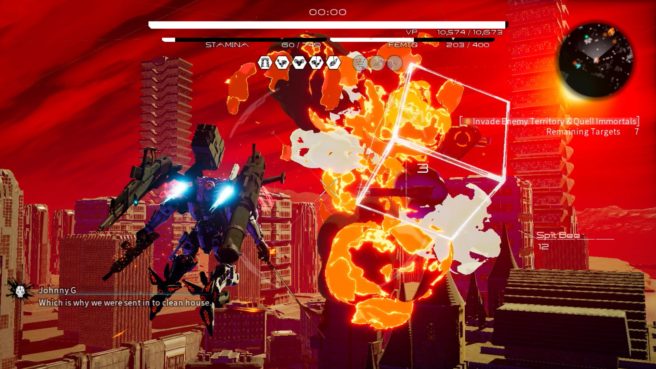 Daemon X Machina was first announced at E3 2018. The game then returned again for this year’s show, where a final September launch was announced. That comes off of a demo from earlier in 2019 in which players were able to share feedback with the development team.

A little while back, 4Gamer spoke with producer Kenichiro Tsukuda about Daemon X Machina. Before giving a brief status update on development progress and how the story is being treated, Tsukuda went in-depth about improvements and changes that have been implemented after fielding comments of those who tried out the demo. Tsukuda shared some interesting tidbits here, such as how the small text in Prototype Missions only happened due to an error in the code.

It’s been a year since the first reveal at last year’s E3, but we now we have a release date.

Tsukuda: I’m glad we are finally able to announce it. It took us a little more time that we expected to reflect on all of the player feedback from the time-limited ‘Prototype Missions demo we released, but things are now moving along smoothly.

How finished is the game as it stands?

Tsukuda: The rough structure of the game was basically finished when we released the demo. But then things arising from that demo have taken a lot of time to address.

Along with the announcement of a release date, you also showed off a new trailer. There were lots of characters on show, and I get the feeling there is a lot of depth to the story.

Tsukuda: There are over 35 appearing characters in the game, and the story is pretty dense. But we also want the player to enjoy the action, so we were mindful of the story not getting in the way of that. I’m not sure how to phrase this, but even though the story and world are well-developed, there was always a worry that players would crave more freedom and action if we overstuffed the story.

So instead of just having cut scenes in-between battles, is it more a case of the story being expressed through interactions during battle?

Tsukuda: We have both types, but we never wanted the scenes to become too long. Although who knows if we actually managed that… (laughs) The important thing is what the players think.

You also released a video detailing how you have addressed some of the feedback. Those demo missions you mentioned running from February 14 until March 11 – how many players actually tested the game out during that time?

Tsukuda: Worldwide downloads of the demo exceeded one million. We also released a worldwide questionnaire, and we had over 40,000 responses to that.

I imagine that providing all of those translations was difficult.

Tsukuda: Yeah, it was, especially given it wasn’t just English but a lot of other languages too. We made full use of our translation tools (laughs). Since we wanted to make the game the best it could be, with the help of everyone here, we managed to look at just about all of them.

This is going back a little, but why did you decide to use the demo to gather feedback in the first place?

Tsukuda: First off we wanted everyone to know what type of game we were making. This is an entirely new title, so no matter how much we promote the game on our site or with trailers, it might still be difficult to grasp exactly what it is. And because it’s a game, we wanted it to express itself on its own terms. To do that, I think it was important for players to try it for themselves.

True. It’s unusual for these types of demos to have things like multiplayer and character customization already included.

Tsukuda: One of the points our questionnaire addressed was the differing online experiences of our players. We also had a lot of direct feedback from players on what they found confusing or difficult.

Do you have a particular example?

Tsukuda: This is a basic one, but some players said that they wanted the starting mech to move faster. We want as many people to enjoy this game as possible, so we originally set the speed that way because we wanted to give those who were not used to this type of game time to adjust to the pace.

I also got the feeling that it was a little sluggish. Were there a lot of people voicing that opinion?

Tsukuda: Yes. But because this is a game where part of the fun is upgrading your equipment and strengthening your arsenal, we tried to implement that feedback while also being careful to not lose that element of the game. Anyway, in the end we were able to see all of those shared concerns about the game. Obviously, the whole questionnaire process was put in place so that we could make the game better in the first place.

I see. What element of the game did you receive most feedback on?

Tsukuda: The main thing was the visibility. Since many were saying that it was difficult to spot enemies, we went back to that part and tuned it from the ground up. We thought it would be better if large object were highlighted with a marker and also that when the player is attacked a marker would appear on the screen indicating the direction the attack came from.