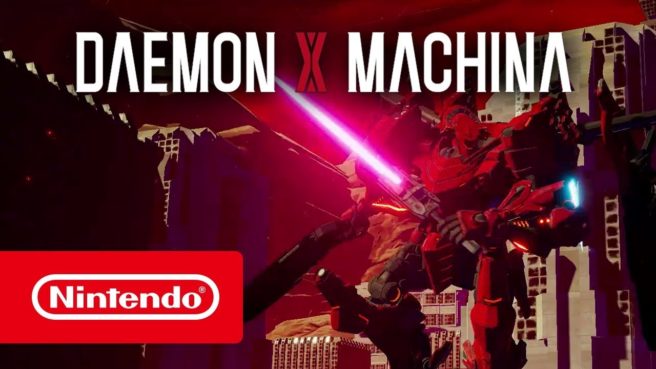 Nintendo UK published its own interview with Daemon X Machina producer Kenichiro Tsukuda today. Tsukuda spoke more about the game, including the story and visuals. He also teased reveals that are planned for Gamescom 2018 later this month.

The full interview can be read below:

Could you tell us a bit more about what sort of game DAEMON X MACHINA is?

DAEMON X MACHINA is a fast-paced action game – you play as a pilot known as an Outer, and fight in battles using the Arsenal mechs you equip. As an Outer, you’ll fight against enemies in lots of different missions, while customising the weapons of your Arsenal.

Because they’re mechs, you have complete control of them on land and in the air. You can also obtain equipment from enemies in real-time, and then decide accordingly what sort of tactics would be best, and change your equipment on-the-fly.

Mr Tsukuda, you have quite the pedigree in the mech action genre, having worked on titles such as the Armored Core series. How are you looking to make this the best mech action game out there?

One way we hope to achieve that is by making it appropriate for the age we’re now living in. The environments in which people are playing are always progressing and changing – we see advances in hardware, and now with Nintendo Switch, people can play both at home and on-the-go, and also online.

In terms of gameplay, we’ve made it so that you can fight with the style you want – you can get new equipment and change it in real-time on the battlefield, so you can alter your tactics at any time. We’re also working to make it so that you can train up and customise your mech, and strengthen it beyond mere equipment. This means that anybody should be able to play in the way they want, without having to rely entirely on their skills.

What sort of story are you looking to tell in the game?

The story is set after the moon has fallen and the world has changed. Your immediate enemy is AI (Artificial Intelligence). When the moon fell, mankind built walls called Ovals in order to limit the disaster. In order to rebuild, they made machinery and networks controlled by AI.

However, due to the power of energy particles called Femto that spread when the moon fell, the AI was mutated, and became an enemy of mankind called Arms of Immortal.

Meanwhile, powerful individuals emerged, wanting to monopolise the power of this new Femto energy, and so planned to drive the evil AI out from the Ovals. Some humans, known as Outers, obtained special powers from the Femto.

They’re hired as mercenaries by those powerful individuals and fight against the AI in Arsenals. The player character is one of these mercenaries, and will uncover the mysteries of the world.

Speaking of which, the Arsenals in DAEMON X MACHINA seem to be fairly versatile machines. Could you tell us a bit more about what they can do?

The mechs in the game move by tracing the movements of the Outer piloting them. This means that the strength of a mech also depends on the physical abilities of the Outer. That’s a part of the game’s setting, but I also feel it’s important to consider gameplay equally as well.

So, we made it so players can equip lots of different weapons and fight in the way that they want. By giving them so much control of movement on land and in the air, players have a lot of freedom in battles. The mechs also have lots of other abilities, but I’ll save that for another time…

Fans of Fire Emblem: Awakening and Fire Emblem Fates might recognise Yusuke Kozaki’s name. He’s working on the character designs for this game, so we can probably expect to meet some interesting folk along the way, right?

There are all kinds of characters in the game. There’s someone who watches in the wings, and will come to help if your character gets into a sticky situation. We have two brothers who search battlefields for weapons and parts to sell, and another character with a dark past.

The characters you meet will sometimes be your allies, and sometimes your enemies. Mr Kozaki is currently working on the character designs, so I hope to be able to show them to you and talk a bit more in the future.

In the trailer from Nintendo Direct: E3 2018, we saw some seriously cool looking mech concepts which Mr Kawamori worked on. How is he approaching his designs this time around?

They’ve been designed with the concept that the player character – the Outer – would equip, or rather wear, the mechs. So while it’s still armour, by designing both more muscular looking parts and more armoured parts, Mr Kawamori could achieve a kind of “mech as a character” design that only he could pull off.

Speaking of visual design – the game has quite a unique visual identity when compared to other games in the genre. Could you talk about what led you to pursue this art style?

With so many different games out there, you kind of develop a fixed concept of what a game in a particular genre should look like. However, games are also creative works, so I feel we have the freedom to have an individual style.

So although this is a mech action game, instead of going for photorealism, I wanted to try our hand at a more comic- or anime-like visual style. The staff agreed with me, and so that’s the approach we’re pursuing.

Mr Tsukuda, we hear you’ll be making an appearance at gamescom this year…

During Nintendo Treehouse: Live at E3 2018, I showed how Outers can get out of their Arsenal. At gamescom 2018 I’m hoping to show what more you can do with that feature. Also, I think it will be an opportunity to show some new aspects to the gameplay that we haven’t explained yet. I hope you’re looking forward to it!

We certainly are! Thank you very much for your time today, Mr Tsukuda.