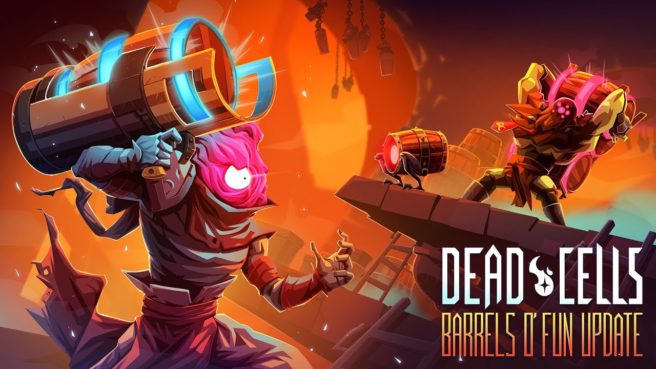 Dead Cells is continuing to offer up new content for existing players. The next update, known as Barrels o’ Fun, arrives on Switch this summer.

The update adds The Derelict Distillery as a new biome, new enemies, new weapons, explosive barrels and breakable walls, and a new soundtrack. We have further details and a trailer below.

The new biome is called The Derelict Distillery and as with all the other levels in Dead Cells, we wanted to give it a distinct atmosphere. So expect to see loads of old broken barrels and bottles, pipes venting steam, cool looking metal containers in the background – that kind of thing. There’s also some barrels sitting around that you’ll be able to interact with in a couple of ways, some are harmless and others are quite a bit more dangerous…

What’s a new level without new foes? Nothing, so you’ll find some huge fellas who throw some pretty big explosive barrels right into your face, or if you get too close they’ll just smash a barrel onto the ground and jump clear, leaving you to take the blast.

You’ll also have to deal with a sneaky mimic hiding among the regular barrels in the corridors. They’re not the toughest mob out there but they have a pretty devastating self-destruct which can catch you out if you’re not careful. They’re also pretty fast, so they can and will chase you down.

Onto the weapons now, and we thought that if enemies can hurl barrels at you, then you should be allowed to throw some straight back right? So we’re introducing the barrel launcher – a bazooka-style weapon that fires bouncing exploding barrels, what more can we say?

After shock damage arrived in our last update we needed to add a trap that can dish out shock damage too, so we created the tesla coil. Useful for dealing damage to large groups of enemies, throw it down whenever you need a bit of crowd control – which is pretty much always if we’re being honest!

Explosive barrels aren’t just limited to the barrel launcher and enemy abilities. You’ll find them dotted around the Distillery, and if you time it right you can use them to your advantage. Watch out though, because enemy attacks affect them as well so you need to be on your toes. Some mini platforming style sections are thrown into the level too. Yeah, there’s a lot of explosions in this biome…

As well as new gameplay content, there’s also a whole new soundtrack available. The classic Dead Cells songs have been reworked by Yoann in the style of chiptune/8-bit music, so make sure to enjoy some retro style runs!