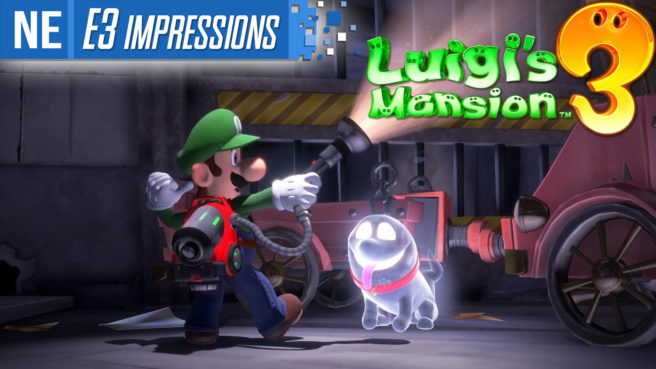 At E3 2019, Nintendo kindly invited us to their booths for a private look at their most important upcoming titles of the year. In part three of this series, we’ll be taking a look at the spookiest game from Nintendo this year: Luigi’s Mansion 3.

You can check out footage of Oni Dino playing games from E3 on our YouTube and hear Oni Dino chat about E3 impressions from the show floor and more on our weekly podcast (available on iTunes, Spotify, and many more platforms).

For more detailed impressions of Luigi’s Mansion 3, check below the break.

The demo began with a quick tutorial of the basic moves in Luigi’s arsenal: the Strobulb (aka flashlight), the new Poltergust G-00, and the Luigi “scare fart” (I have genuinely forgotten what the real name for this move is). Polterpup served as my helpful buddy, and if I ignored the prompts and decided to move, he would bark at me to get back in line. As soon as this extremely simple tutorial was over, I was whisked away to a medieval castle filled with ghosts. A clearly important boss ghost taunted me with some sort of gem or charm in a miniature colosseum. Then I was put in full control of Luigi – I had my mission. The environments were so pretty and interesting with real-time lighting, suits of armor, weapons, whiskey/wine casks and so much more. I just wanted to take my time and look at everything but time was of the essence. I sincerely hope this game makes ample use of environmental storytelling.

I moved one room over, saw two ghosts play fighting with swords, and it was already time to fight. This demo knew I had not a moment to spare. Battling with ghosts in this entry felt slightly different than I remember Luigi’s Mansion 1 and 2 being. I still stunned ghosts first with a Strobulb charge then sucked them up with the Poltergust to get their HP down to zero, but this time around I noticed I was doing very little damage to the ghosts until they actually made contact with the vacuum head. That’s when the numbers really started to drop, but there was another system on top of that. The game now has a slam attack that I could make use of by mashing the A button after a ghost got stuck to the Poltergust. Once the meter built up after enough mashing, Luigi tossed the ghosts around and even hit surrounding enemies for massive damage. I couldn’t help but be reminded of the excellent back and forth throw attack Turtles In Time for the SNES. Luigi’s slam felt equally satisfying to execute. It wasn’t just the visuals and audio cues that were doing it for me, but also the work required to pull it off; the steps needed to build up to the attack didn’t always line up, so once I could nail the attack pattern from time to time, it was super gratifying. This new attack alone makes combat incredibly exciting, and was the moment that my interest for this game turned from a simple, “Yeah, it looks good. I’ll buy it,” to an enthusiastic, “I can’t wait until this game comes out.”

I noticed another battle tactic while in my introductory fight: while I was still fumbling around with the controls and learning how to deal big damage, Polterpup suddenly appeared after seeing me struggle. Once I latched on to an enemy with the Poltergust, Polterpup grabbed onto Luigi’s butt to give him a little extra stability. It was adorable and hilarious. This was another one of those great gameplay elements that Nintendo often adds to their more recent games for less skilled players so they don’t encounter too much of a challenge, and end up putting the controller down. Later on, I also noticed upon watching the footage I captured that Polterpup had an A button icon over his head when I was trying to find the ghosts. I didn’t notice this when playing, so I’m not sure what it does, but I would guess that the pup will help Luigi locate the enemy to some degree. I also noticed that I could accidentally stun poor Polterpup with my Strobulb, too, but this didn’t seem to affect his assistance in battle. I can’t confirm this for sure due to my brief time with the game, but it seemed like this was just another cute animation to flesh out the player experience.

On the topic of cute animations that add to the experience, Luigi’s expressions are very prevalent and change depending on his actions – even more so than previous games. I noticed him happy to see Polterpup, and then terrified when he got barked at; the courageous determination in his eyes when charging up the Strobulb to stun ghosts; and looks of uncertainty and apprehension when actively sucking up enemies. That’s that Nintendo polish. Extra details like these can sometimes go overlooked, but we as players do notice them subconsciously, and it all makes for a more refined and enjoyable game experience.

In regards to level design, I noticed lots of little secrets and puzzles in each room that made great use of the Suction shot (toilet plunger) in particular. These little bonus puzzles often opened up secret rooms or chests that netted me more money or collectible treasures. I am a big proponent of rewarding players who are careful to explore their surroundings, and that design philosophy meshes so well with the methodical and leisurely paced gameplay of the Luigi’s Mansion series.

Luigi’s Mansion 3 in particular seems to be making use of co-op mechanics as a motif, because there were some good traps throughout this castle that really got me. Gooigi is now an integral part of gameplay (hence the new model Poltergust G-00), which required swapping back and forth between the two playable characters to activate a set of switches or cross over some spikes. The little tease this demo gave me has me excited to see more in the full game. Upon being introduced to the first spike trap, Professor E. Gadd phoned in to explain Gooigi to me in a very succinct manner. I’m not sure if this is because it was a demo, but I recall E. Gadd being quite the chatty pain in the butt, so it is a welcome change for me. Despite his newfound brevity, he still has that goofy voice, “Iye, eh, sukku sukku! Looigi!” The Professor even popped in from time to time to give me a single hint when I was struggling with a puzzle. It was the perfect amount of gentle help without getting into, “Let me do it for you!” territory.

Generally speaking, it seemed like I was always doing one of three main objectives with a few variations to the formula to mix things up: exorcising ghosts, solving puzzles, and collecting treasure and cash. Sounds like Luigi and the covetous Captain Toad, Treasure Tracker, have something in common on that last one… I do hope the layout of the whole game is a bit more akin to the first Luigi’s Mansion, which had a Metroidvania/Resident Evil progression design. I enjoyed that pace where I’d be stumbling upon something I wasn’t sure how to make use of, or it required some backtracking later in the game after gaining a key, item or ability. It added to the sense of mystery and deliberately paced gameplay style of the Luigi’s Mansion series very well. Judging from the demo, however, I’m not confident that it’s going that direction. The layout seemed to focus on room-to-room progression, with an emphasis on larger rooms with an isolated puzzle halting progression that made use of Gooigi co-op mechanics. It reminded me a bit of Luigi’s Mansion 2 in this regard, but hopefully this one doesn’t wear me out with constantly revisiting the same locations time after time like 2 did. That was a huge gripe of mine with that game.

The demo wrapped up with a boss fight against the vaguely Spanish ghost with a Napoleon complex who taunted me in the very beginning. As battles with ghosts throughout the demo had taught me, I had to make use of all the gadgets in my arsenal to defeat him. These micro-puzzles in the heat of battle kept the gameplay varied and kept Luigi on his tip toes. I don’t want to give away how I solved the fight in order to keep things spoiler-free, so stay tuned for the final release. All I’ll really say is that there were several very satisfying slam attacks, and one in slow motion that blew all of the boss’ armor off that got me pretty hyped. I’m sure Mr. Tezuka chuckled at my restrained pop-off…

I have to agree with my podcast partner, Galen, when I say that Luigi’s Mansion 3 is probably the game of E3 that surprised me the most. I didn’t anticipate it to be so much fun. I switched between fights and puzzles at a brilliant pace, and there were incredible animations and physical humor all along the way. Satisfying visual effects, sounds and atmosphere really immersed me in the fights and just made me purely happy to be playing the game. The best compliment I can give Luigi’s Mansion 3 is that I smiled and laughed a lot while playing, which is something very magical that not many video games do for me. Nintendo polish, y’all.