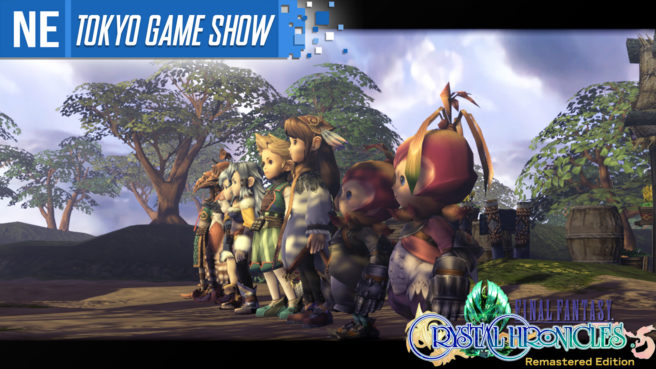 At Tokyo Game Show 2019, Square Enix kindly set us up with a special demo session of the upcoming Final Fantasy Crystal Chronicles Remastered Edition for Switch. Sifting through the miasma, I sat down with three others to crawl through the dungeon-like environments and bring back some Myrrh (AKA impressions) for our readers. Though I’m not so sure the town will be very festive upon my return from this excursion…

You listen to me chat about gaming and more by joining in on our weekly Nintendo Everything Podcast, available on nearly all platforms (including iTunes, Spotify, PocketCasts and more).

I sat down at the demo station with three other people. All four of us were playing cross-platform between PS4 and Switch, which was a remarkably effective way of showing off the remaster’s online co-op ambitions – naturally, I chose the Switch version. I haven’t touched this game since about 2005, but the warm feelings I’ve associated with the world and music of Crystal Chronicles came rushing back to me as we played the opening stage: River Belle Path.

Visually, Final Fantasy Crystal Chronicles Remastered Edition is fantastical. The artwork and character designs come from the creative mind of Toshiyuki Itahana of Final Fantasy IX fame, which is felt immediately in the first stage’s aesthetic akin to an Irish countryside. The art direction has aged well and translates seamlessly to modern consoles with extensively upgraded textures and reworked UI. I’d be ashamed if I didn’t mention the fantastic soundtrack by Kumi Tanioka and Hidenori Iwasaki. Renaissance instruments are used abundantly for a rustic, Celtic vibe that pairs perfectly with the game’s aesthetic. We’ve heard that the title vocal tracks have been rerecorded, but I can’t wait to hear any new or unused music that didn’t make it into the original. I can’t stress this enough: the music is one of Crystal Chronicles’ strongest points. 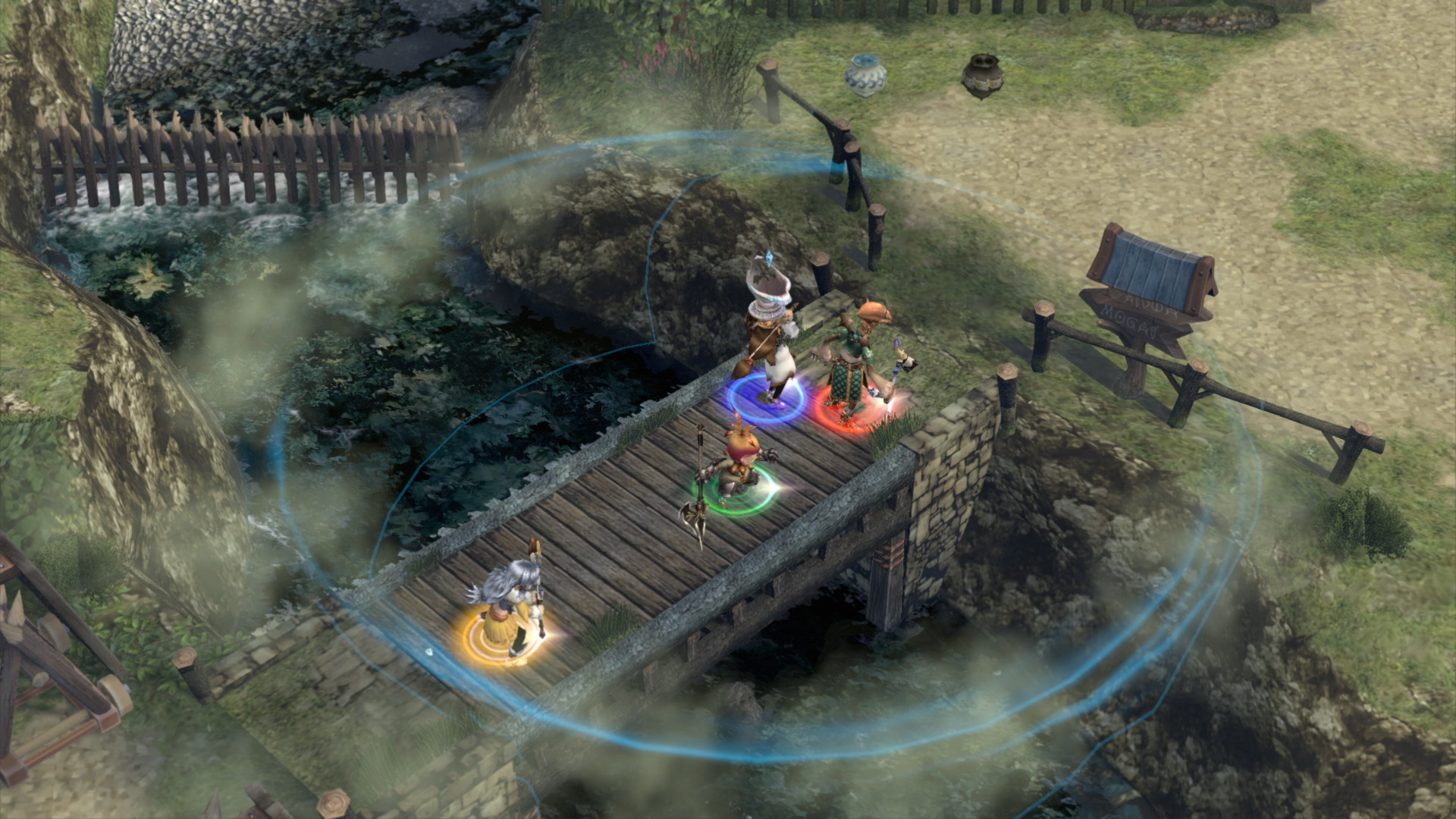 The game mechanics of Crystal Chronicles are interesting. On the surface, we have an action RPG with a few dungeon crawling mechanics for good measure. However, a crucial gameplay element is one that is woven into the narrative and world-building: the poisonous miasma and the crystal chalice. Miasma is an airborne poison that harms people to the eventual point of death. The story of Crystal Chronicles has people living in towns inside the barrier of a crystal, which needs Myrrh, a naturally occurring dew from a Myrrh Tree. The crystal chalice is the player’s vessel for collecting Myrrh and bringing it back to the townsfolk to restore their crystal’s barrier, keeping them safe a bit longer. It’s a somber story with a bit of optimism, and you, the player, are the townsfolk’s hope.

Now that we have that straight, know that the crystal chalice is a cruel mistress. It forms a protective barrier and can be moved around on the battle field… but someone needs to move the chalice. So in a party of two or more, one of the members must opt out of battle to instead carry the chalice around at any given time. This renders them defenseless and unable to attack unless they set the chalice down, leaving the barrier stationary, preventing progression. In terms of a plot device, it’s the strongest it’s ever been in a Final Fantasy game, but it also limits the gameplay experience. Now granted, this can be a new concept for players, and unfortunately, two of my fellow mates did not know about the chalice and the miasma, which made it difficult to progress properly; we spent a lot of time dying and reviving each other. I did hear that the enemy AI has been improved, and though I can’t say definitively, our group did have quite a challenge throughout the stage and with the final boss. 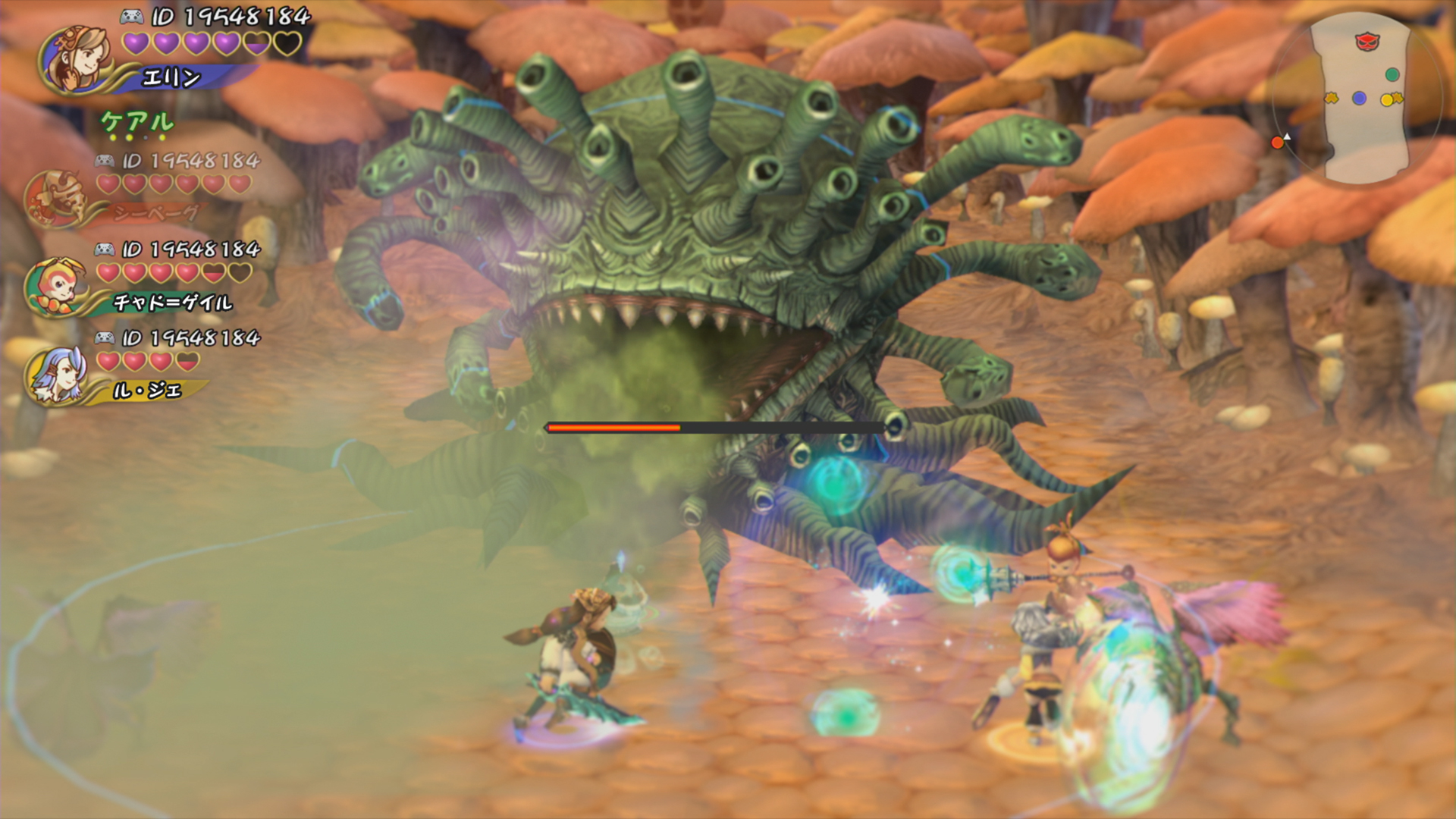 The demo experience didn’t show off many new features, but considering the new additions are mostly new costumes, bosses, dungeons and music, it made sense. Instead, the demo focused on the cross-play functionality and co-op battle mechanics. Battles and customization options are where the game shines. The real-time combat is simple, yet engaging as players work with their partners to fell all kinds of familiar Final Fantasy enemies. One of my favorite aspects of battle is combining magic in real time: each character casts a single spell that can be combined if another player casts the same spell. For example, if three characters all cast “Fire” on the same area, it will turn into an enormous “Firaga” spell. This is where I ran into some issues with the demo’s cross-play, though. Before the bad news, it’s important to remember that this is a development build and the game is not yet final. However, I noticed my partners had several noticeable frames of delay and judder to their movement. It was hard to coordinate casting magic together due to these delays, and I had to calculate for that to my best ability. It was very distracting and I definitely took several hits from enemies that I shouldn’t have.

On a positive note, there were a surprisingly large amount of in-game text options to quickly shout out to my team mates. If I recall correctly, there was even a dedicated button for pulling up the menu quickly. This made me feel at ease that I would be able to communicate effectively with random players online – the last thing I want to do is actually talk to someone.

Overall, my experience was mixed. I know there’s a good game under the connectivity problems and that with an experienced party of four, Crystal Chronicles can be an excellent co-op game. I had many more remaining questions: how will online connectivity work between stages? There’s non-battle activity between the towns and overworld. How will menus work during battle stages? Sometimes a player will have to swap their spells and items around. What other quality of life features have been included? I love the online co-op and cross-play implementation because that solves one of the original releases biggest issues: getting a party of four together. However, the other big issue from the original is unfortunately not solved: the chalice. I understand that it’s integral to the story, but it truly hinders gameplay. At the least, the barrier’s area of effect could have been increased.

Stewing on my impressions of the remaster, I find I’m left with more questions than anything – unsure whether I’ll be looking forward to the retail build. If the net code can get cleaned up, I’m confident the online experience will elevate the gameplay… But that’s certainly conditional, isn’t it? Then, I remember all of the magical feelings this game gave me a decade and a half ago: the genuine sense of adventure, fighting against the death of the world by retrieving Myrrh and bringing it back to the village, the incredibly charming celebrations the townsfolk hold in your honor upon your return home… Yeah, I think I’m looking forward to this release. Fingers crossed they can sort out the issues.

Final Fantasy Crystal Chronicles Remastered Edition launches worldwide for Switch on January 23rd, 2020. Japanese pricing is confirmed at 4,800 yen (before tax). Western pricing has not been announced at the time of this article’s publication.