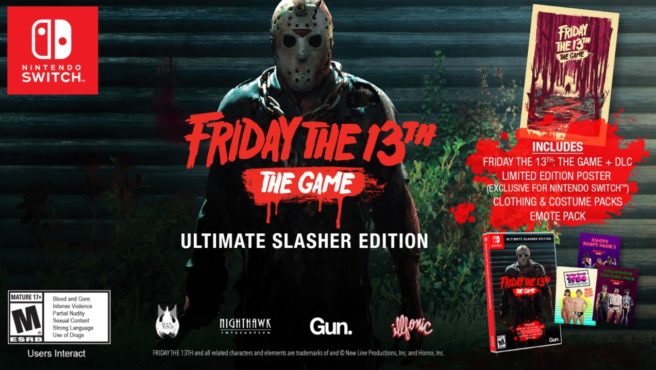 Publisher Gun Media, developer Black Tower Studios, and retail distributor Nighthawk Interactive have announced that Friday the 13th: The Game Ultimate Slasher Edition is coming to Switch on August 13. North American retailers will be selling the game for $39.99.

Friday the 13th: The Game Ultimate Slasher Edition comes with the full base game, all released downloadable content, and an 11”x17” limited-edition poster. Pre-orders are live at Amazon and GameStop.

Publisher Gun Media and developer Black Tower Studios are bringing Friday the 13th: The Game to Nintendo Switch for the first time, as a love letter to the original movie franchise with iconic film locations and character models painstakingly recreated down to the bloody details. The game pits eight players against each other, either as one of seven teen counselors, or as iconic killer Jason Voorhees himself. Counselors must search for the tools to survive, escape or even try to take down the infamous murder machine, while Jason must rely on his array of abilities to track, hunt and kill his prey. The teens need to contend with time itself, too, as Jason not only feeds off the fear of his victims, but also becomes stronger as the night progresses.

Friday the 13th: The Game Ultimate Slasher Edition for the Nintendo Switch includes:

Eight-Person Multiplayer and Single Player Modes – On maps spanning multiple iconic locations from the movie franchise, players will match up online as either Jason Voorhees or a Camp Counselor trying to survive the night. Players seeking lower pressure slasher fun can take the fight offline in matches with AI bots.

Killer Variety – Players can don the mask of their favorite incarnations of Jason Voorhees as depicted in films two through nine. Each Jason is hand-crafted with specific strengths, weaknesses, and exclusive brutal kills. The retail edition offers even more brutal execution options, with the Pick Axe, Pig Splitter and Machete Kill Packs.

Character Customization – As players level up, they will unlock new playable Counselor and Jason models that can be purchased with Customization Points (CPs). CPs also unlock new kills for Jason, game-changing perks that help Camp Counselors survive the night, emotes for self-expression, and various regalia appropriate for a funeral … or seven. The retail edition includes the Spring Break ’84 Clothing and Halloween Costume Packs for players to try on before the murder party.

And first screenshots from the Switch version: