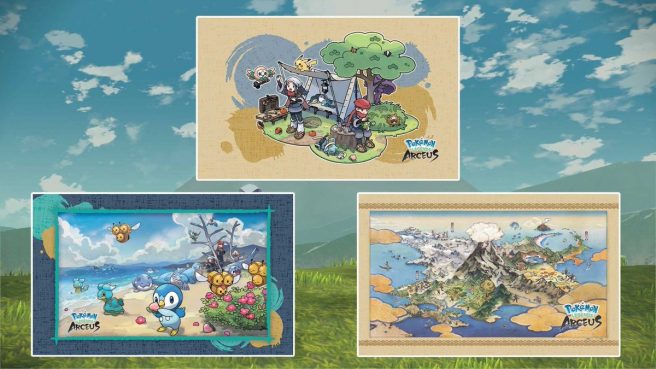 GameStop has announced a special pre-order bonus for Pokemon Legends: Arceus. By reserving the game, fans will receive a free art card set. We have a look at the different designs above.

If you need a refresher on Pokemon Legends: Arceus, check out the following overview:

Your adventure takes place in the expansive natural majesty of the Hisui region, where you are tasked with studying Pokémon to complete the region’s first Pokédex. Mount Coronet rises from the center, surrounded on all sides by areas with distinct environments. In this era—long before the events of the Pokémon Brilliant Diamond and Pokémon Shining Pearl games—you can find newly discovered Pokémon like Wyrdeer, an evolution of Stantler, and new regional forms like Hisuian Growlithe, Hisuian Zorua, and Hisuian Zoroark! Along the way, uncover the mystery surrounding the Mythical Pokémon known as Arceus.

Pokemon Legends: Arceus launches for Switch on January 28, 2022, and you can pre-order the title from GameStop here with the art card set.

Nintendo Everything is a participant in the GameStop affiliate program. The website may receive a partial commission through orders placed with this retailer.