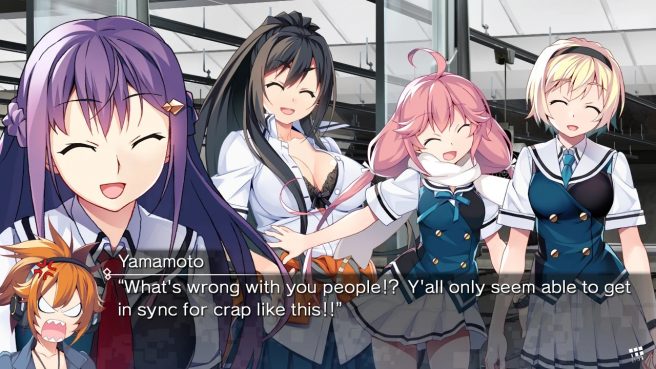 The visual novel series Grisaia continues on Switch with Grisaia: Phantom Trigger 06, and gameplay is now available. Prototype brought the sixth entry to the system this week.

For more on Grisaia: Phantom Trigger 06, check out the following overview:

Several years after Yuuji Kazami and his friends fought for their lives in a fierce battle, a new generation of heroines gather at Mihama Academy, which has been reinstated as a ‘specialist training school’.
Taking place in the same world as The Fruit of Grisaia, new characters bring an exciting fresh take in Volume 6 of this brand new series!

This thrilling story, which unfolds at the reborn Mihama Academy, will undoubtedly excite not only those who have played previous releases, but those who are new to the series as well!

Available in three languages!
The text can be set to Japanese, English or Simplified Chinese (audio is Japanese only). This includes in-game text, options, and the digital manual. Language settings can be changed at any time.

Volume 6 Summary
It’s the day that comes around once a year—a day when Haruto and the other members of a previous generation of Phantom Triggers make their way to a mountain summit. Atop that mountain lies Haruto’s master—Aoi.
On the way, they reminisce about the life of Aoi, a young woman so vicious, and yet so pure.
As they do so, the secrets behind the reborn Mihama Academy begin to spill forth.
“All matter eventually breaks down, and every living thing eventually dies. Entropy. That’s all there is to it.”
Just what events led to Aoi’s final moments in this world…?

Gameplay
It’s a visual novel in which you don’t need to make any choices, so you can enjoy the story like you would when watching a movie or reading a book. The story comes to life with a star-studded voice actor cast and fully-voiced story (excluding the main character), gorgeous graphics and music, and immersive animation.

We have the Grisaia: Phantom Trigger 06 gameplay below.

Grisaia: Phantom Trigger 06 is now up on the Switch eShop. It supports English, Japanese, and Chinese language options.