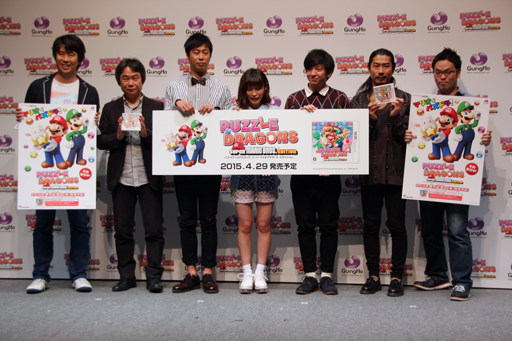 GungHo Online Entertainment made a surprising announcement this week: Puzzle & Dragons: Super Mario Bros. Edition for 3DS. Following the reveal, Japanese outlet 4Gamer caught up with a couple of the game’s developers for a brief interview.

Morishita: We contacted Nintendo with New Year’s 2014 greetings as we reported that Puzzle & Dragons Z had sold one million copies. We said, “we’d like to do more Puzzle & Dragons spin-offs” to president Iwata and Mr. Miyamoto. From there on, we tried to create the Mario version in-house at GungHo as we thought, “wouldn’t it be better to show Nintendo?” Then discussions with Nintendo progressed again.

Yamamoto: We showed a prototype to Nintendo several months after contacting them for the first time.

Morishita: From there, we rebuilt the game anew by combining the action of Puzzle & Dragons and the world and stages of Super Mario Bros.

Morishita shared a few other things as well. He indicated that Puzzle & Dragons: Super Mario Bros. Edition won’t just be about completing stages, as there are also character training elements that will allow you to “play for quite a long time.” He wouldn’t reveal how many characters will be in the game, but there will be “many”.

Some have brought up the possibility of a mobile version of Puzzle & Dragons: Super Mario Bros. Edition. However, Morishita said that “There are no plans at this time.”

Finally, Morishita reiterated that the title will head west. “Nintendo will announce details concerning the overseas release,” he said. Sadly, he was unable to share anything about launch timing and how the western version will different from the Japanese release.