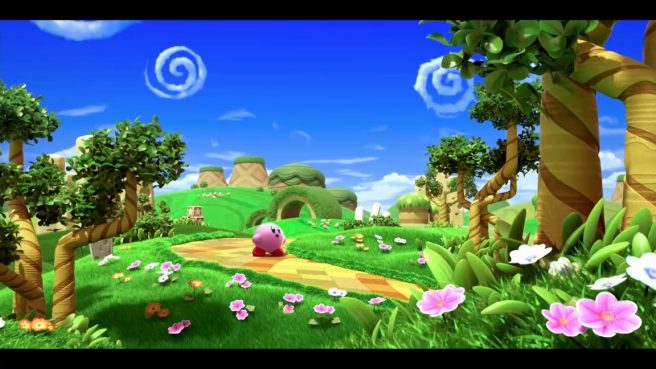 There are now two major Kirby games on Switch. Kirby Star Allies came first and was largely 2D, but you might be interested to know that it largely paved the way for Kirby and the Forgotten Land.

Shinya Kumazaki, who was the general director of both games, spoke about their development connection with Japanese magazine Nintendo Dream. Kumazaki says that Star Allies was a means of “laying the groundwork for future works and we were sure that the next game would be 3D.” Interestingly, HAL Laboratory felt that Star Allies and Forgotten Land were “a single large connected project.”

Our translation of the discussion between Kumazaki and Nintendo Dream is below:

First, can you talk to us about the thought process behind the creation of Kirby and the Forgotten Land?

Kumazaki: For the first fully 3D Kirby game, there were many challenges that needed to be overcome. One of those was overcome in our previous game Kirby Star Allies, which had been the culmination of a lot of hard work in 2D.

The final battle there also had some 3D elements right?

Kumazaki: Yeah, we thought of it as laying the groundwork for future works and we were sure that the next game would be 3D. The Kirby team and particularly HAL Laboratory considered Star Allies and Forgotten Land to be a single large connected project.

So it was all part of a larger plan?

Kumazaki: Star Allies was a game made with a tempo and scope in mind that would allow both long-standing series fans, but also young children, to finish the main mode. In contrast, the theme of Forgotten Land was made with deeper, full 3D action in mind, since we had many fans asking for ‘meatier action’. There were still things we were not able to achieve in Star Allies, and deriving from that we wanted to make a ‘deep and accessible fully 3D Kirby game’, while also continually rethinking the amazing traits of the ‘strange and surreal thing’ that is Kirby. And that became the theme for the game.

Kirby and the Forgotten Land released on Switch back in March. You can read our review of the game here.