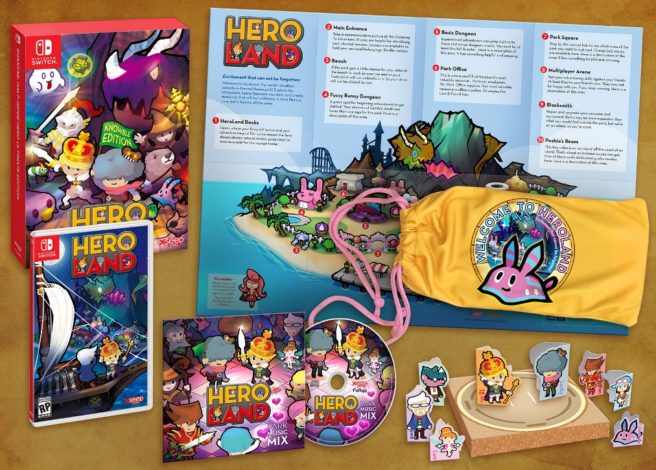 Heroland will be released in the west on December 3, XSEED Games announced today. The 2D RPG was known as Work x Work in Japan and was worked on by key developers from Mother 3, Legend of Mana, and Fantasy Life.

Welcome to Heroland – a bright, tropical theme park resort where guests partake in an authentic RPG-styled adventure, exploring dungeons, beating up baddies, and become a legendary hero! Unfortunately, the role-playing becomes reality when Lucky, an unexceptional part-time tour guide, and his guests including Elric, the spoiled, fallen prince of the Knowble Kingdom, unintentionally begin unraveling Heroland’s dark history. Now it’s up to Lucky, Elric and a ragtag team of tourists-turned-heroes to save Heroland (and the world!).

Heroland is directed by Takahiro Yamane (Fantasy Life), written by Nobuyuki Inoue (MOTHER 3, Legend of Mana), set in a colorful 2D world created by Nobuhiro Imagawa (MOTHER 3, Legend of Mana), and jam-packed with Tsukasa Masuko’s (Shin Megami Tensei) whimsical tunes. The esteemed team brings an unforgettable adventure filled with unique heroes including overzealous knights, high school girls, pretentious princes and a nihilistic otter (or is he human?!). And no adventure set in a theme park would be compete without a curious cast of monsters including cute little slugs, selfie-loving skeletons and man-eating broccoli— who also happen to be co-workers.

XSEED Games will be offering a “Knowble Edition” for Heroland. We have a look at the full contents above.