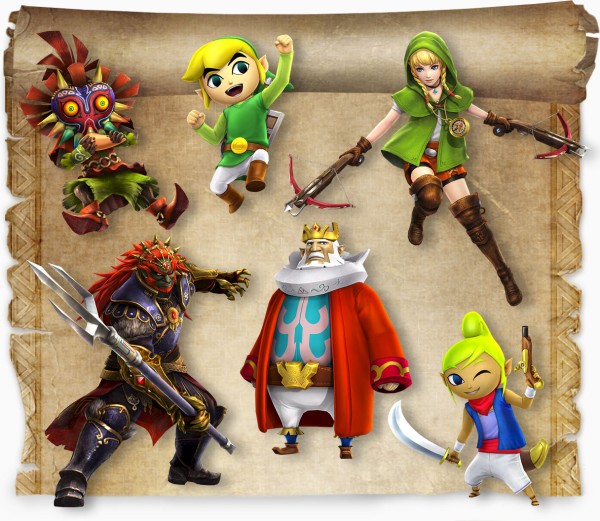 Nintendo UK has released a ton of info on the DLC/Season Pass for the upcoming Hyrule Warriors Legends.

The first pack, the “Master Wind Waker” pack will be made available in Late Spring and will only be available for the 3DS game. It will provide 16 new costumes for the “My Fairy” mode and will give a new Adventure map. This pack will cost £1.79/€1,99.

The third pack is based on Phantom Hourglass and Spirit Tracks and will arrive in the Fall. It will contain a new playable character and a new weapon for Toon Link in both versions, and the 3DS version will get 15 more Fairy costumes and a new Adventure Map. It will cost £6.29/€6,99 for the 3DS version, £4.49/€4,99 for the Wii U version, or £8.09/€8,99 for both.

In addition to all of these, there will also be a Legends Character pack for the Wii U, priced at £10.79/€11.99. It will release in the Summer and contains all of the characters from Legends, as well as Ganondorf’s Trident weapon. The site notes that this is not included in either Season Pass. Also, while Toon Link and Linkle are downloadable through other DLC packs, they will only be able to use the weapons that come in those packs pm the Wii U unless they are unlocked through the Legends Character pack or via codes from Hyrule Warriors Legends.

Additionally, Medli from the Wind Waker will be a free download for both versions of the game. She will release alongside the “Master Wind Waker” pack.