Posted on August 4, 2019 by Oni Dino(@Oni_Dino) in Interviews, Switch eShop 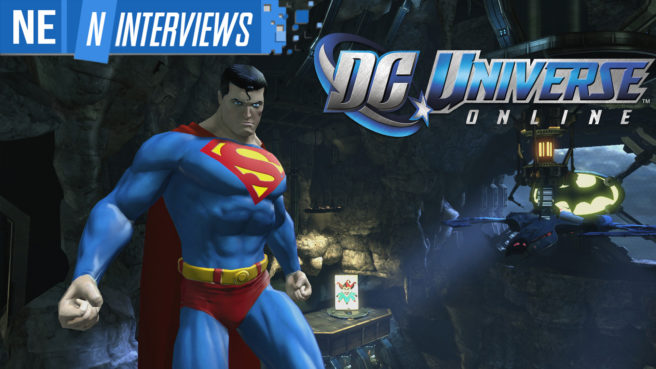 At E3 2019, we were invited to meet with the incredibly passionate team at Daybreak Games for an behind-closed-doors gameplay demo and interview. We spoke at length with the creative director, SJ Mueller, and executive producer, Leah Bowers, as they kindly answered a number of our questions about how they decided to bring the game to Switch, how everything stacks up compared to PS4 and PC, future content, cross-play possibilities and so much more.

The devs were incredibly excited and genuinely passionate to bring the game to Switch; check out our transcript below.

The surprise announcement of DC Universe Online for Switch was met with a lot of enthusiasm! Many players might be jumping into DC Universe for the first time with the Switch release. For those who haven’t heard of the game previously or haven’t given it a shot yet, what can they expect?

Mueller: I think the important detail is you create your own character in the game. We have a pretty robust character create system with lots of different powers and weapons and travel powers you can combine to basically just create the hero you were thinking of as a kid. I loved DC growing up. I had a million ideas for superheroes, [and] you can be a villain in our game if you really want to.

What would you be in the DC Universe? Who would you follow? Would you want Batman as a mentor? Wonder Woman, Superman? On the flipside, Lex Luthor, Circe – who’s one of Wonder Woman’s nemesis, the evil Greek witch, voiced fantastically by Michelle Forbes. Or the Joker. Obviously Mark Hamill – a lot of people just pick that route because they just want to hear Mark Hamill all day.

So I think that’s probably the key takeaways. You’re not just gonna be Batman. You get to design your own character and kind of carve out your own space in the universe with other players. I got most excited when the iconic characters would be talking directly to me.

What sort of plans are there for the future in terms of new content and keeping players engaged?

Bowers: We definitely update the game quite often.

Mueller: Which is not that usual on Switch. They were like, “You update the game how often?” We have massive episodic content drops 3 or 4 times a year. But even in between that, we do seasonals for holidays. Right now summer’s coming up soon, we have a whole Atlantian theme summer event. Stuff like that is constantly coming out. And even weekend events. There’s always something happening. We want you to be able to log in next weekend and it’s a little bit different from last week. Double rewards, special boss fights – things like that – constantly updating the game.

So you mentioned how Nintendo was kind of surprised with the amount of times you have to update. Was that okay in the long-run?

Bowers: Oh yeah, definitely. I think it was just a conversation because we are a larger game. We do have consistent updates, and ensuring that they were prepared for how our game was gonna grow, how we were gonna handle all of that with them.

Mueller: It’s exciting because there’s nothing like this on the Switch. It’s kind of like a whole new world.

Bowers: I think it was just a surprise to them.

Mueller: It’s a very active, living, breathing community. And we will have more episodes this year. You might just want to listen in at Comic-Con to hear things about that.

DC Universe Online originally came out several years ago. For those who started out at the beginning and perhaps have been out of the loop for a while, how has the game changed since the original launch?

Mueller: We added lots of power sets. Before Atlantis, we started doing water powers because I had a dream of doing Atlantis eventually, and I’m like, “If we’re gonna do Mara and Aqualad, we have to have aqua powers.” So it’s actually player powers that they can access. And Green Lantern powers. So we added a lot of power sets, we added skimming movement mode, we’ve added tons of ways to customize your character. Like I was talking about that water texture that you can just put on your gear and stuff like that. That was just a couple of years ago we added that. And you can have auras, like Green Lantern has the green aura, you can customize it. A lot of customization to your character.

And some features. Because it’s like, “Oh you can level up in our game… forever!” Is there anything else I can do? And so we have augments where you can modify your character and customize what stats are important to you, and an artifacts system. Think of like cool items of power. My favorite one to talk about is called the Solar Amplifier. It’s a Kryptonian technology that gives you massive heat vision and stuff like that. We wanted to make sure that not only were you gaining levels, you kind of also have horizontal progression too so you can customize the way you look and the way you play.

How and when was it initially decided to bring DC Universe Online to Switch? And specifically, how long has the port been in the works?

Bowers: It’s kind of a funny story. Basically, my boss Jack Emmert and I started talking about it. I got one for Christmas and I was blown away by the console itself, and he was like, “Well we should just do it.” And I was like, “I don’t know if we can do it. We should do it.” And I’m like, “You’re totally right. We have to do this.” And it was kind of born out of that. We really didn’t know how it was all gonna work. Thinking about it really did blow our minds at first, too. Well, want to just get some kits and start figuring this out? And it just kind of snowballed from there. I think this is probably one of the things I’m the most proud of in my career. I’m super, super, super stoked about this.

Mueller: All of these milestones we would celebrate. Like the engineering team just handed me a Switch, and I’m like, “What?” You’re in Metropolis on a real server right now. And I’m like, “In my hands?!” And I could just walk from my office to my meeting playing the game. It was just incredible. I never thought that we would be portable like that.