Posted on October 26, 2019 by Oni Dino(@Oni_Dino) in Interviews, Switch eShop 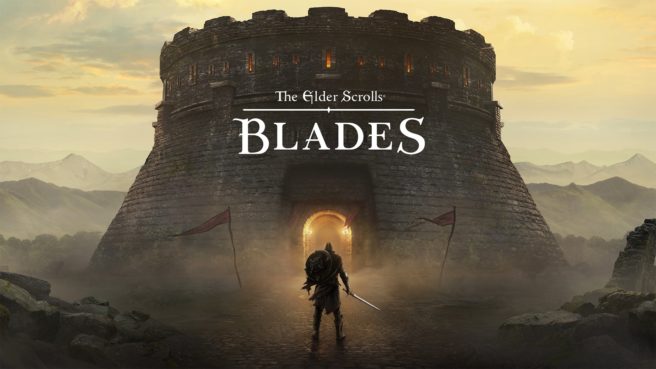 At E3 this year, Bethesda announced a reworked port of their mobile title, The Elder Scrolls: Blades, for Nintendo Switch. The upcoming game will have many new features including button controls, PvP, seamless pick-up and play between devices, and much more.

We were able to catch up with Craig Lafferty and Matt Carofano (project lead and art director on Blades, respectively) earlier this year for an interview on the upcoming title. We we asked them questions about Switch’s new features, in-depth aspects they haven’t talked about yet, and many more questions that fans want to know.

Check out our transcript below:

So speaking in regards to the Nintendo community, a number of players may have jumped in to The Elder Scrolls series for the first time with Skyrim’s launch on Switch. With that in mind, what makes Blades different from Skyrim?

Lafferty: It’s more designed of like a quick pick up and play game. Designed more for short sessions. It’s not open-world. It’s more of a play at any time, and you can play it for a long time, but more short bursts of time and more classic dungeon experience of going into a dungeon, fighting the enemies, killing the boss, getting the loot, and going back to town, upgrading your town, as opposed to a huge open world. It’s tailored for the devices we put it on.

With the Switch, there’s multiple control options for developers to play with. How have you gone about reworking the touch based controls of the mobile version to fit Switch? And will there be touch controls in the Switch version?

Lafferty: Probably not. We found that with the way the game plays, it maps really, really well to the Joy-Con. We were able to map all of the buttons, and we found that playing with the Joy-Con feels great, and having to take your finger off the Joy-Con to touch the screen was not. We actually added it in there and tried it, and found it wasn’t super intuitive.

Carofano: We’ve also added the motion controls too, and that brings a whole new element because then you really feel like I’m swinging the sword, and I’m raising this hand to block, and how the buttons work with that for the spells and the abilities are really, really cool. It’s a really great balance.

I assume with the nature of swinging with the left and right Joy-con, the pro controller won’t have motion controls, right?

Lafferty: Yeah, that will not have motion controls. It’s gotta be the Joy-con.

Does the game take advantage of any Switch-specific features in addition to motion controls?

Lafferty: I think the motion controls are the big one. We’re looking at other things the Switch offers, but we’re not sure what we’ll have at launch or not. amiibo support is something that’s on the table, but we’re not sure. It’ll depend on timing and what else we have for the game.

Were any significant changes made to the Switch version? For example, have the graphics been improved in any way?

Lafferty: The main thing is just the controls. The graphics – we designed it very high end, it scales – but very high end, so on the newer phones it has depth of fields and other effects, and most of those translated over to the Switch, so it was designed to be playable on console or portable from the start, so it translates very well.

Will the Switch version of the game still require a constant internet connection in order to play?

Lafferty: Yes. It will, but having an offline mode is something we definitely hear from a lot of people for the game in general, so that’s something we always constantly look at – like how would we do it. We want to make sure – the online game, we’re adding PvP in the fall, we want to make sure cheating isn’t an issue. So it’s like, how do we do an online mode that makes sense? Right now we’re requiring an internet connection, but in the future it’s something we may add if we can have a good solution for it.

During Bethesda’s E3 presentation, it was mentioned that the game will still be free. Are there any changes to the monetization model of the Switch release?

Lafferty: No. The game is the same across platforms. That said, we’re constantly reading feedback from players – what they want, what they like, what they don’t like. So any change we make to the game to the monetization would carry over to the Switch version as well. We’re constantly looking at – we’ll probably make more changes. We’ve already done some. We adjusted the silver chest timers and other things people didn’t like as much and were causing problems, so we’ll keep an eye on it and all of those changes will come to the Switch version.

Bethesda has promoted this game has being compatible across devices. Will the game’s updates on Switch keep pace with the mobile versions?

Lafferty: That is our intent, yes. For mobile, you don’t really have the certification process you have for the Switch. So, we’ll have to adjust for that, but the intent is to keep them the same and progress carries over.

Will there be cross-play for the PVP Arena?

Lafferty: Yes, that is our intent.

How has the process been of implementing cross-play and cross-progression between the Switch and mobile versions?

Lafferty: It’s actually been really smooth. Nintendo’s been great to work with. They help us with any issues we have. But the game was designed to be played across devices. Your progress and your character pick up right where you’ve left off. So if you’re in a dungeon, it’ll actually save where you’re at and carries over. It currently does that on the mobile version between iOS and Android. It does it on Switch as well. It’s gone very well.

Has it been relatively simple to do? How has it been working with Nintendo on a technical level to get those features in?

Lafferty: The version we’re showing here is actually pretty early. It’s still early in development. Each platform is different, so figuring out how do you tune the graphics and the performance. The current version you see a couple of hitches and stuff, so that’s just because it’s an early version and we need to work through those issues on the Switch. From the very beginning, we had in mind bringing it to consoles, bringing it to the Switch with how the backend works, how the controls work. So it’s actually gone very smoothly.

For players that have already sunk a significant amount of time into Blades on mobile, are there any more content updates on the horizon besides what was announced on stage?

Carofano: It’s like I’m trying to hold back all the stuff we want to do for Blades. The Elder Scrolls is just such a huge universe for us to explore. We’ve all been working in this world for so, so long. We have a million ideas of things we’re gonna bring to Blades. Clearly this fall we’re gonna bring Arena fights and PvP, visiting your friends’ town, being able to trade, a lot more social elements. But past that, we’re gonna continually update this game and add new content. Every type we’re gonna bring it. It’s gonna be really great.

What else would you like fans to know about The Elder Scrolls: Blades on Switch or the game in general?

Lafferty: I think just how good it feels on the Switch. The controls map really, really well to the Joy-Cons and the motion controls. And then your progress carries over, so it just feels like a natural platform for it.

Carofano: Get ready for it this fall.

And lastly do you have any message specifically to the Nintendo community? Bethesda games on the Switch have been really well received, so I think a lot of fans are really looking forward to Blades.

Lafferty: We love the Switch. We’re so happy how well the games are going over. And specifically for us, Skyrim was really well-received. And then last year at E3 we did Fallout Shelter, and everybody loved it. So it’s been great to work with Nintendo and we’re super excited to bring Blades to Switch. I have a Switch myself. It’s back in the hotel. We love the platform.