[Interview] I Am Dead devs on how the game plays, making a 3D title, working with Switch, and more

Posted on August 8, 2020 by Brian(@NE_Brian) in Interviews, Switch eShop 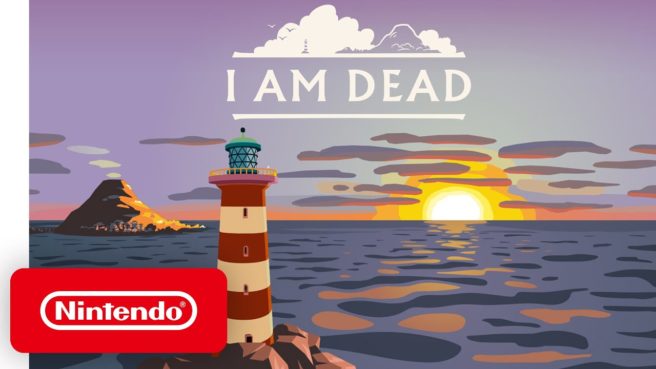 If you watched the previous Indie World Showcase back in March, you may remember a little game called I Am Dead. It’s an upcoming puzzle adventure game from Ricky Haggett and Richard Hogg, the creators of Hohokum and Wilmot’s Warehouse.

After it’s reveal earlier in the year, I Am Dead will be releasing on Switch in September. Those looking to get up to speed on what the game has to offer can read up on our new interview with Haggett and Hogg below. The two developers chatted with us about the actual gameplay, making their first 3D title, working with Switch, and more.

To start out, can you introduce yourself and tell us a bit about I Am Dead?

Hogg: We are Ricky Haggett and Richard Hogg. Together we made the game Hohokum and Wilmot’s Warehouse, as well as some other stuff. We have been making games together for over ten years now. Of course on each game we work with a bunch of other people and I Am Dead has been our biggest game so far in that respect.

I Am Dead is a kind of hidden object game. You play as Morris Lupton, who is recently deceased, and with the help of your dog Sparky (Also dead) you have to find a whole load of objects in order to connect with and speak to other ghosts – all the objects you find are things which meant something to them or played a part in the story of their lives. The game has a unique mechanic that allows you to see inside things, not so much like an X-ray but more like progressively slicing away the object. It’s hard to explain but makes total sense when you are playing. It’s a really cool, tactile way of looking at things. As you use this ghostly power to look inside things, you find more things, and end up drilling down and down. You might start with something big like a house or a boat and end up with something really tiny like the pea from a whistle.

Can you touch on the core gameplay loop and explain what players can expect?

Hogg: So as I mentioned, you are looking for hidden objects, but hopefully you are also just enjoying exploring all the stuff in the game using this interesting way of looking at things. When we have play-tested the game people often get lost examining all the things – I’m not sure that counts as a ‘core gameplay loop’, but for me it is the real spirit of the game.

Haggett: We’re really into making games where people get distracted from the thing they’re ‘supposed’ to be doing and mucking about instead, because it’s fun…

Hogg: There is another part of the gameplay loop that I should mention: In order to find out which objects you are supposed to find – we call them mementos – you look inside people’s heads. In a similar way to how you can see inside objects, you also can look inside the heads of various folks and see their memories. These play out like a kind of comic strip, and give you a clue to the objects you need to find.

I Am Dead’s premise reminds us a bit of Ghost Trick from Capcom. Did the team happen to take any inspiration from that game or any other titles in particular?

Hogg: Sorry, I have never heard of that game. I will check it out.

Haggett: Our biggest inspirations for I am Dead came from the real world. There’s a lot about Shelmerston which feels like Hastings – a town on the south coast of England where Richard lives. We’ve spent a bunch of time walking around there – in various museums, pubs and cafes, discussing the game, but also just talking more generally about interesting stories or characters. A lot of that stuff ended up in the game, in one way or another.

I Am Dead takes a different approach from previous games the team has worked on (Hohokum, Wilmot’s Warehouse), but also exudes the same charm and puzzle gameplay we’ve seen from those preceding titles. Was it a challenge going to a more 3D-based design and was this planned from the start, or did it start out as 2D before expanding towards other directions?

Hogg: It was a challenge! We planned right from the start to use 3D for this game, as the core idea needs it. I’m glad you think it has the same charm as those other games – from an art direction point of view, it was hard making the jump from a 2D game, where I basically just draw everything, to a 3D game where I am working with a team of people modelling, animating and doing the environment design. I think it could have easily lost some of the distinctive ‘voice’ that my stuff has along the way, but I think we did a good job of keeping the vibe of my 2D work.

Haggett: Making a 3D game was a big jump for us – we had to learn how to use Unreal Engine, and a lot of new concepts about the production process. I’d reached the point where I felt totally comfortable making 2D games, and pushing out of that comfort zone felt scary at first, but having a load of new toys to play with and new things to learn was also what I needed, in order to not have the next 20 years of making games feel safe and boring. I’m already excited to start on the next 3D game, now I have a better sense of what the deal is.

Switch has become somewhat of a surprise to a lot of developers thanks to its versatility and ability to see their games run on what is essentially a portable machine. Though it’s not your first time working on portable hardware, how has the experience been of developing for the hardware?

Haggett: Unreal Engine does a lot of the work involved in making versions for different platforms for us, which is good because as a small team we wouldn’t have been able to tackle the ports otherwise. Many of our older games were made using our own engine, but then, rolling your own tech for 2D games is significantly more manageable.  There’s been a bunch of optimization work required to get the Switch version running well, but it’s generally been okay.

Is there a small secret or tidbit not widely known about I Am Dead that you can share?

Hogg: The other day I was putting the final touches on some of the art, and realized that all of the characters in the game have 4 fingers, but all of the gloves 5.

Haggett: There are a lot of gloves in this game. There’s a fox who is obsessed with stealing them.

Annapurna has always published some of the most unique experiences that you won’t find anywhere else, and I Am Dead seems to be no different. What has it been like working with them?

Hogg: Fantastic. They have been very supportive and protective of our vision for this game.

Haggett: Our approach to making games is very organic – we don’t start with a solid plan, because we’re aiming for an unknown destination – trying to make something genuinely original.  This process requires self-belief, but often feels quite scary – striking off in an uncharted direction, and… what if there isn’t anything good out there? And as you go, you often need to course-correct, and somehow figure out what’s good about this thing you’re making, while you’re making it.

The team at Annapurna Interactive are excellent publishing partners for us, because they understand this process. They help us to have confidence in the good stuff, and provide a sounding board for helping us decide when to steer in a different direction, all the while trusting that we’ll figure out how to end up with a great game.

Does the team plan on branching over to other genres or art styles after I Am Dead or would everyone still like to push the puzzle genre further?

Hogg: I think everything we make is quite different. At the same time I want to make games that are true to who we are and. I like to think that all the games we make have a similar sensibility even though they are quite different experiences.

Haggett: We don’t tend to know what genre of game we’re making when we start: I am Dead didn’t have any puzzle gameplay for the first year of its development – that just emerged as a natural thing to do with the slicing mechanic and the world we’d been building.  Our next game will definitely be non-violent, playful and colorful – beyond that, it’s hard to guess!

What else would you like to share about I Am Dead with the Nintendo community or about the game in general?

Haggett: Even though it’s called I am Dead, this is really a game about people’s lives. You’re going to be rooting through people’s possessions and learning all kinds of stories about them.  Stories like, finding friendship with a robot based on a shared love of gardening or being a bored teenager stuck in a small town… About successful long-distance relationships, and difficult parents. Stories about sticklers for rules getting their come-uppance, protest movements, and tragic accidents. About how places change naturally over time, and how ancient traditions came to be. But also stories about foxes who love to steal gloves, and the love between a toucan and a fish person.   We hope you enjoy them all, when I am Dead comes out!