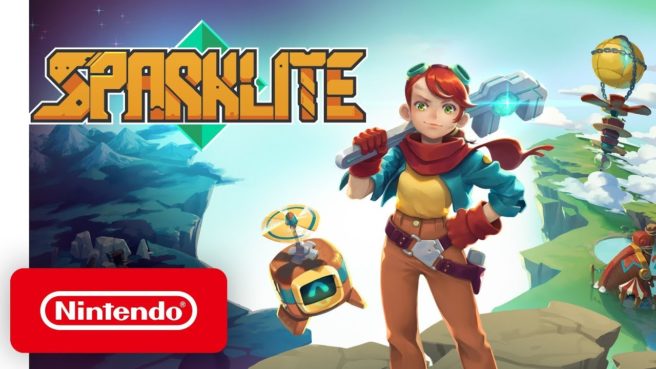 If you’ve been hankering for more Zelda action on Switch, Sparklite could be right up your alley. The 2D action-adventure game, which just dropped on Nintendo’s console this week, was heavily inspired by the classic franchise.

Around the release of Sparklite, we spoke with Red Blue Games co-founder Edward Rowe. We discussed those Zelda inspirations in greater detail – which range from the gameplay to the soundtrack – as well as the distinctive art style and potential post-launch updates.

For those who haven’t been following the game, what is Sparklite all about?

Sparklite is an action-adventure set in the whimsical and ever-changing land of Geodia. You play as Ada, a genius engineer who crash lands in a mysterious land. You must use an arsenal of gadgets, guns, and gear to explore the new world, and face off against an evil plot that threatens life itself.

Where did the inspiration for Sparklite stem from? Why did the team decide to create a new action-adventure title specifically?

It’s hard to pin down a single inspiration. We were really into FTL, Binding of Isaac, and other rogue-ish games at the time, and we wanted to find a way to bring that desire to play just one more round into an action adventure. I think like a lot of Indies, the desire to do an action adventure was fueled mostly by a love of the Zelda games.

This is Red Blue Games’ first big project that isn’t on mobile. How was it decided to create a major game like this for consoles?

We use the Unity game engine, so we knew that if we focused on designing gameplay for a controller first, it would be a natural fit for consoles. After development started Nintendo announced the Switch, and we were really excited because we knew the game would be perfect for it. Kevin and Edward also came from a studio here in Raleigh (Vicious Cycle Software) that did a bunch of console releases so they were already experienced with developing on multiple platforms.

Sparklite is described as having been inspired by classic Zelda games like A Link to the Past. In your view, what is the biggest way that Zelda has inspired Sparklite?

We really wanted to capture the sense of adventure from the Zelda games. You don’t know what the world has in store but you want to find out. You meet interesting characters and uncover sinister plots. You start out as a seemingly ordinary person and develop into a hero. We have so many good memories of playing the Zelda games growing up, and we wanted to tap into that to share with new players.

On a contrasting note, what does Sparklite do differently to stand out on its own?

Sparklite’s game loop ends up really setting it apart from Zelda. Players must defeat the mining Titans, who are depleting the world of its Sparklite and polluting everything in the process. Because the bosses are very difficult, players must explore in order to gain enough Sparklite, and thus the power, to beat them. That said, a skilled player could beat all the bosses from the very beginning, so it’s sort of open ended. You can explore as much or as little of the world as you need.

Sparklite’s world is procedurally generated. Can you go into more detail about this? How much of the game is randomized and how much remains the same in each playthrough?

We basically deconstructed the elements of Zelda games and found the ways in which they could stand on their own in a procedural world. Some things lend themselves nicely, but others, like elaborate dungeons, didn’t. For example, tricky trap encounters we felt could be repeated and would still be fun, whereas a step switch puzzle wouldn’t. For a lot of puzzles, once you know the solution the fun is over. So we built a world that contains both of these elements, but sort of separated the two concepts into different areas of the game. We have what we call “event” rooms, where players will be asked to solve elaborate challenges, or meet NPCs. We actually persist the status of these rooms across plays. Then we have randomized sorts of encounters, which we call sinkholes, where players won’t know what they’re gonna get when they jump in. These are designed to be fun when repeated.

Sparklite has a striking pixelated art style. Can you elaborate on the creation of this lush visual style, and what led to you taking this direction?

We had a vision of the art style we wanted pretty early on. We knew we wanted to have it be cartoony, with a limited color palette so that we could focus on making elaborate animations (animating pixel art is harder if you have more colors). At some point we got a professional, Anders Gullmarsvik, to make a mockup based on the direction we wanted. He floored us with his concepts, and we just all knew we had to match it. We contracted with him for a while and he really helped establish the style.

The game’s soundtrack is described as “GameCube-inspired.” Can you explain this a bit more? Are there any GameCube soundtracks that were particularly influential?

We worked with Dale North on the music. Right from the start he had a vision for the sound. He pitched us on the idea of taking modern software and combining it with MIDI samples, and we liked it. We sometimes refer to our art style as “modern retro”, because we use modern technologies like motion blur on top of fairly rigid pixel art, and Dale’s concept was sort of the musical equivalent. So he’s using actual MIDI instruments that he recorded himself, which is exactly how they used to do it back then. To be honest it was still a hard decision for all of us because the tracks also sound great with modern “high def” sort of instruments.

The Wind Waker soundtrack was certainly a big influence for us in giving direction. We love the cartoon stingers and musical sound effects! But I can’t speak for the inspirations Dale tapped into when making his compositions.

How has it been developing for Switch? Have there been any substantial challenges or benefits compared to other platforms?

Switch development went great. We had to do some optimization for it, but we needed to do those for low-end PCs anyways. The biggest issue was the 1280×720 resolution. The scaled down resolution we chose for our game (which we decided on before the Switch was announced) is 480×270, which doesn’t scale evenly into 1280×720. So in order to keep it pixel perfect, we had to scale up the game to 3x, a size of 1440×810, and then let the camera scroll. In the end, it is possibly a better experience because you have to explore each room a bit. But in the future we will pick our resolution based on both 1280×720 and 1920×1080.

Yep you can play on a single Joy-Con! As recent dads, we really wanted to let parents hand a controller to their kid at any time. This meant they had to be able to jump in and out, and that they shouldn’t keep the first player from progressing. They can just jump in and start helping. I think some people call it “assistive co-op”. We also fondly remembered playing Jet Force Gemini and having to unlock co-op, so we sort of paid homage to that by having it be unlockable (early on).

Are there any plans for any content updates following launch?

We would love to add more content. We have lots of ideas that just couldn’t make it into the game on top, so if the game does well enough we will definitely want to explore getting them in. For example we might want to add a New Game Plus and Boss Rush mode to help give challenges to the exceptional players.

Lastly, do you have any messages for Nintendo players in particular?

All of the devs at Red Blue Games grew up on Nintendo. We love the high degree of polish, the personality in the characters, and especially the solid gameplay and design of Nintendo products. It’s been our biggest goal to give our players similar experiences when they play our games. If we can capture even a fraction of the magic of Nintendo games, I think we’ll have made something pretty cool. So we hope you feel like we achieved that when you play Sparklite!