[Interview] Konami and Digital Eclipse on the making of Teenage Mutant Ninja Turtles: The Cowabunga Collection

Posted on September 4, 2022 by Brian(@NE_Brian) in Interviews, Switch 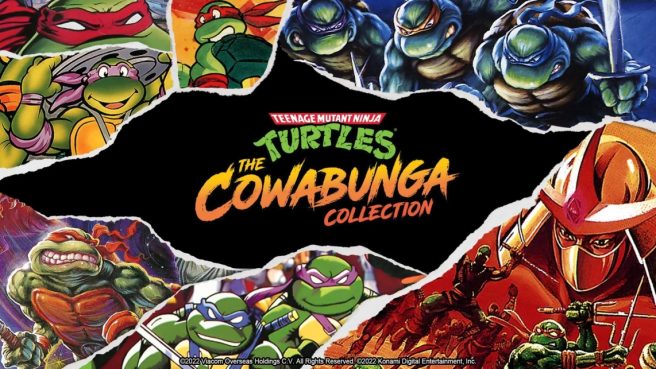 Switch owners have many choices when it comes to collections, but the console just received one of its best packages yet with Teenage Mutant Ninja Turtles: The Cowabunga Collection. There’s a lot to keep fans busy thanks to the thirteen titles that are available, but on top of that, there are features like online play for some games, the ability to save anytime and rewind, development art and sketches. and historic media content.

To learn more about the making of Teenage Mutant Ninja Turtles: The Cowabunga Collection, we caught up with Konami senior producer Charles Murakami and Digital Eclipse editorial director Chris Kohler. You can read our full discussion below.

How did the project initially begin and ultimately come together? How long has it been in the works?

Charles Murakami: A Konami Teenage Mutant Ninja Turtles collection was first considered in 2018 when we were planning collection games for Konami’s 50 anniversary. After the Arcade, Castlevania, and Contra Anniversary Collections were released, the fans were very vocal about wanting the TMNT games next. With Nickelodeon, Konami, and later Digital Eclipse on board, we were on our way to make the TMNT Cowabunga Collection a reality.

How much involvement has there been on Nickelodeon’s end? Was there anything that the company needed to provide approval on?

Charles Murakami: The collection’s look and features took inspiration from the characters and places in TMNT lore, so Nickelodeon had a lot of art to review. Nickelodeon didn’t just provide advice in keeping the look of the Turtles accurate, but they also provided us with lots of content. The collection has screenshots from the animated TV shows so you can see the origins of the various characters that appear in the video games. Nickelodeon also helped us get IDW’s comic book covers in the game, and introduced us to Kevin Eastman (co-creator of TMNT). Kevin even created two brand new pieces of art for the Teenage Mutant Ninja Turtles Cowabunga Collection Limited Edition!

Who animated the intro animation of the collection?

Chris Kohler: The intro animation was produced by two very talented, Australia-based animators from the world of traditional animation, Tom Barkel and Kit Rigby. We love it!

How long did it take to get everything in the museum between scanning all the proper documents and getting all the high quality screengrabs for the cartoons?

Charles Murakami: The process took the entire project. We started with scans of the game boxes and manuals, and then continued adding more material until we had cartoon screen grabs and comic book covers towards the end of development. To get the historic game design material for the video games, we took a long time going through the Konami archives in Japan to find and scan hundreds of pages of never-seen-before documents.

Chris Kohler: Once we had all of the design documents in hand, that was just the first step. We then had to organize them all and make sure everything was in its proper place. Then we translated the vast majority of them, and where necessary, added floating translation boxes so you can read the design documents in many languages. It was a huge effort from start to finish but we wouldn’t have done it any other way.

Online multiplayer will be available, but only for some of the games in the collection. Can you explain how it was decided which games to support with that feature? Could games that aren’t supported be patched in the future to support online multiplayer?

Charles Murakami: Since none of the games originally had online play, we knew that adding it would be a huge undertaking. We first chose the arcade games, as getting three other friends to play would be much easier with online play. The SNES version of TMNT Tournament Fighters was chosen as it has the most competitive scene. For the fourth game, we chose TMNT Hyperstone Heist for both variety and to give the Genesis fans love as well.

This project seems like a pretty huge undertaking given the number of games, versions, and behind-the-scenes content. What’s been the biggest challenge of putting the package together?

Charles Murakami: For me, getting an ambitious project with so many games off the ground was the hardest part, so everyone asking for the games was a great help.

Chris Kohler: From the Digital Eclipse perspective, the Interactive Strategy Guide that we put together was a big, unique feature that we’ve never done before, and so it required a lot of innovative thinking and hours of work from many different teams (editorial, engineering, art, production) to make it happen. We’re all very proud of the result!

Were there any struggles with the emulation of each game?

Chris Kohler: I think when you’re presenting games from five different vintage platforms in a single product, you’re always going to end up discovering some quirks that you didn’t expect. In the case of the Japanese Famicom versions of TMNT II: The Arcade Game and TMNT III: The Manhattan Project, it turned out that these versions used Konami’s VRC4 mapper chip, while the U.S. versions used Nintendo’s MMC3. That meant we had to update our engine to support VRC4 if we wanted to include the Japanese versions of the games – which we definitely wanted to do, to make this a definitive collection. (When you pick the Japanese versions, you’ll see the Japanese titles, which are different in most cases, as well as the original Japanese key art on the menu and border. As well as any other differences in the games themselves, of course!)

Can you clarify what songs/soundtracks had to be replaced/redone? Did that happen simply due to licensing issues or were other factors involved?

Charles Murakami: Our music licensing department did a great job getting the license to include as many of the original tracks for each video game, including “Pizza Power” for the arcade version of TMNT: Turtles in Time. One track that plays at the beginning of the first TMNT arcade game was unfortunately not available for licensing and had to be replaced.

Digital Eclipse has previously said that Tournament Fighters on SNES features “optimizations.” Could you elaborate on what that means?

Chris Kohler: When played competitively online, the SNES version of TMNT: Tournament is set to Hi-Speed 1 at 60 seconds per match, and features rollback netcode. You can also hit the Enhancements menu before you start a single-player game and turn on features like the highest speed level, the ability to play as the bosses, and other fun stuff, all without having to enter in any elaborate cheat codes. Every game in the collection has these enhancements, and they’re all customized for each game, so definitely check them out when you play.

Was any thought given to including the most obscure Konami titles such as Manhattan Missions for PC and the Konami LCD games?

Charles Murakami: Not only are there obscure games, there are obscure versions like the DOS version of the original NES TMNT. The current roster of 13 games already pushed our resources to the max. We are aware there is a lot of Konami games that came during and even after the games in the Cowabunga Collection, but we wanted to make sure each of the 13 games got the proper attention they deserve.

Chris Kohler: While we weren’t able to include them, the Konami LCD games were actually a help in our research for the collection, as the official U.S. name of one enemy (Flap Jaws, from the original NES game) only appears on the back of the packaging for one of the LCD games. You can also see some photos of the LCD games as part of the many behind-the-scenes items in our in-game Turtles’ Lair.

On a similar note, Konami released a number of other Teenage Mutant Ninja Turtles games in the 2000s. Do you have any interest in seeing those titles re-released together in an additional collection?

Charles Murakami: Never say never! I’ve waited decades for a TMNT Collection, and seeing other fans share my desire to see this project come together is one of the greatest moments in my career. Although sometimes the stars have to align for a project to come together, I’m encouraged when you see fans nudging those stars into place.

What’s your personal favorite game in the collection?

Chris Kohler: I agree with Charles on all counts – especially The Manhattan Project being an underrated gem. My favorite’s probably the SNES version of Turtles in Time. I’m looking forward to playing that with my kid once Cowabunga Collection launches!

Teenage Mutant Ninja Turtles: The Cowabunga Collection is now available on Switch. Nintendo Everything would like to thank Charles Murakami and Chris Kohler for taking the time to answer our questions.