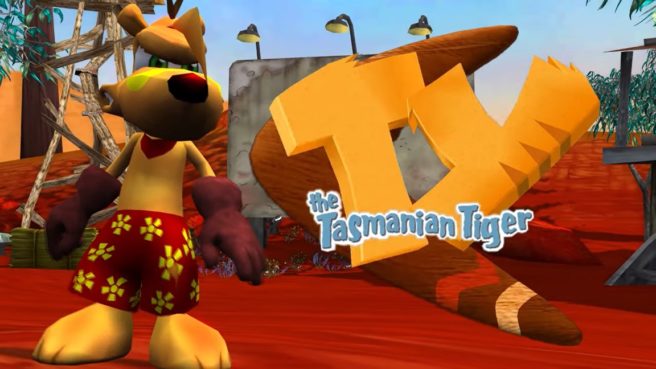 With Ty the Tasmanian Tiger having just launched on Switch a few weeks ago, we thought now would be a good time to speak with developer Krome Studios. Creator Steve Stamatiadis and studio manager Lindsay Parmenter were kind enough to answer several of our questions regarding the 3D platformer.

During our exclusive discussion, Stamatiadis and Parmenter discussed the early days of Ty the Tasmanian Tiger and its creation, why the TV show never happened, and the future of the series. There was also plenty of discussion about the new Switch version, including the porting process and graphical/gameplay updates.

Our full discussion with Krome Studios can be read in full below.

Going back to the early days of TY the Tasmanian Tiger, where did the original concept come from? What made Krome Studios want to create a 3D platformer?

LP: Originally, Robert (Walsh, CEO) came back from America and he’d been talking to Sony. He said Sony was looking to do more platformer games. So we were all sitting around talking about doing a platforming PS2 game, shooting the shit. At one point Steve said, “How about a Tasmanian Tiger?” It felt right, and everyone was agreeable and so it happened.

How was TY himself created? Did the team go through different looks before settling on the final character design?

SS: TY was named after one of our good friends at PikPok, Tyrone. At first, we were calling it TY the Tassie Tiger. We liked the alliteration on the Ts. His look was there pretty much from the start. I was playing around, scribbling, and there was TY, in green shorts. You can see it in the art book. It was totally one of those things where it just came together. No changes. Later, we had the great idea that TY needed to do what every Australian kid has done – get hurt feet running through a patch of Bindii prickles, so we had to take off his shoes! When I took them off, it felt better. It felt better that TY didn’t wear shoes. At the same time, I put him in red shorts and took off the flowers but left the suns, and that was that. And then funnily enough… the Bindii prickles didn’t end up making it into the final game! 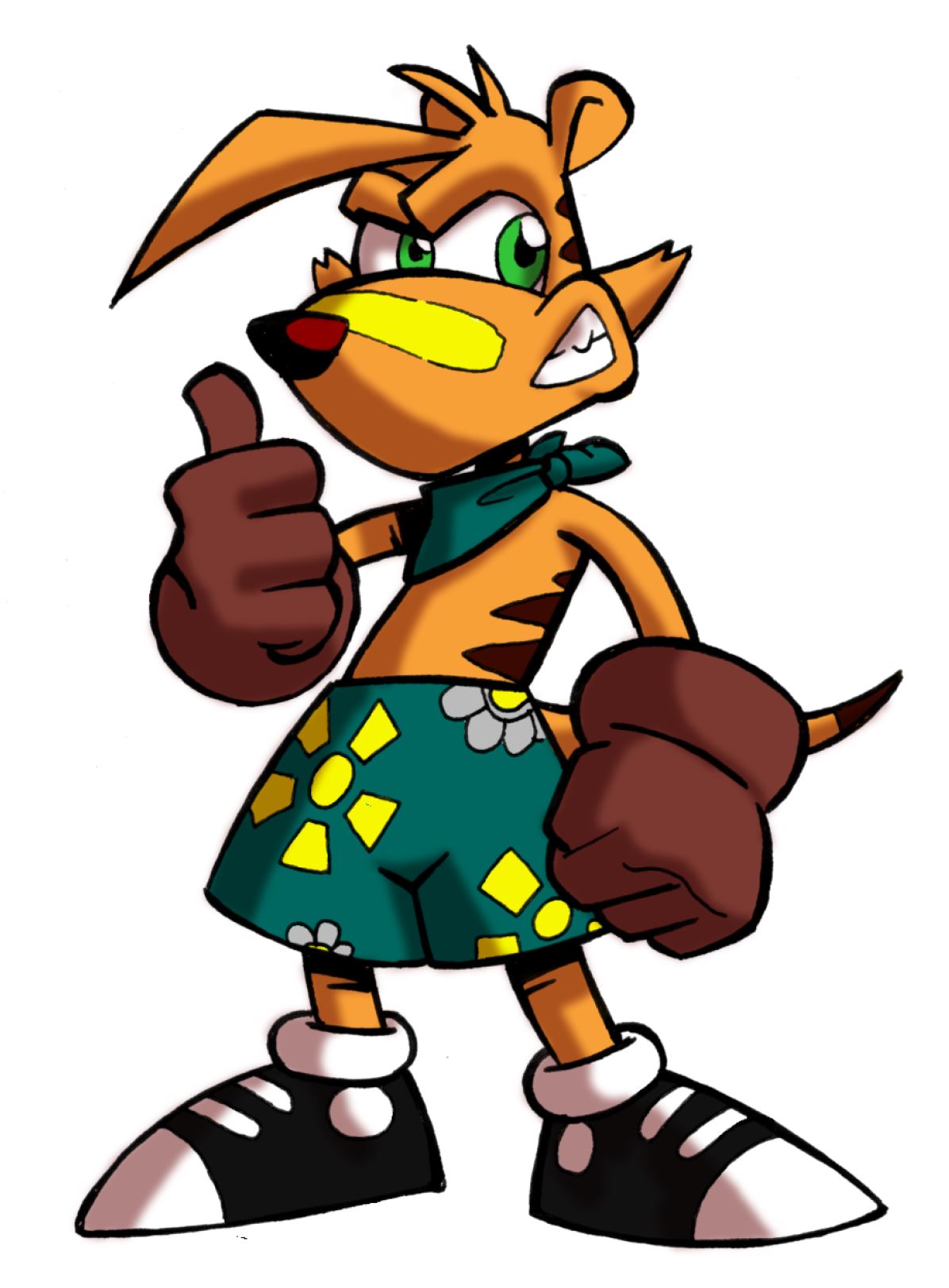 Do you have any fond memories from the game’s original development that you can tell us about?

LP: So many! Right, some we can’t tell you about. I have fond memories of all the overtime working together as a team late at night. There was a time in the beginning when people didn’t get what the game was yet. Then one night the turkey chase was implemented, and it was FUN. It was a great moment for everyone on the team.

SS: A lot of people still bring up the TV commercial. EA had that idea, to have a hospital with other platformer animals like TY had beat them up. That was filmed in a psychiatric hospital in Canada. I remember being a little shocked when they showed it to us but then I thought, “OK that’s pretty ballsy.”

You’re mentioned in the credits as having been involved with “extra voices”. Do you remember what role you played and what the process of recording lines was like?

SS: Groans, damage voices for enemies, that sort of thing. No named characters or lines, nothing like that. What was funny was when we were recording them. Our office was on the train line just outside the Fortitude Valley station. We didn’t have a recording booth. So we’d try to time our takes in-between trains, and had to redo a few because of the trains being in the recordings!

When Krome Studios started to re-release the TY games on PC, since they were originally published by different companies like EA and Activision, did you need to acquire the rights at all?

LP: No! Krome is actually one of the few companies that negotiated from the beginning to keep our rights. They’ve always been ours.

At one point, there were plans for a TY the Tasmanian Tiger TV series. Is there any information you can share as to why it never materialized?

SS: The short version is that networks looked at the characters and thought they should be for younger kids, but the story was for older kids, so they kept not wanting it. And then we just got super busy.

TY the Tasmanian Tiger has just now made a comeback on Switch. What made the team want to bring new life to the game and re-release it on new platforms after so many years?

LP: People kept asking for it. But we were up against what most all small indie studios are up against: not enough money, and not enough time. Also, we were still porting TY3 for Steam. Then, one day, we got brave and did a Kickstarter to help get the funding over the line. It was hard, but we did it!

What was it like seeing the Kickstarter success and knowing that people still have such high regard for the franchise?

SS: It was an amazing shock! We knew people liked it, but to get the Kickstarter funded in 2 days was just amazing!

How did Krome Studios go about bringing TY the Tasmanian Tiger to Switch? Did the team encounter any issues or challenges?

LP: 20 years ago, we were building our engine and the game based on the architecture of the consoles back then. They were single-threaded, and that’s what our technology was built for. When we did the Steam port, we fixed a bunch of stuff that helped get us ahead of a lot of the work for the Nintendo Switch version. With Nintendo Switch it was performance wrangling for the new HD features we had added. The architecture of modern systems has many cores of slower speeds/timings versus a main core of faster speed. Having a game built for single-threaded architecture is not so good with modern hardware that is multi-threaded now.

You did more than just port the game straight over as the visuals have been refreshed. What was the process of enhancing the graphics like?

SS: LOL, when we first started bringing it to Steam, we didn’t have backups of the TY1 source art! We had done them, of course, but after all these years, we’d lost them. We had people repaint all the clouds, sky, into 24-bit high res. I repainted actor textures by scaling up and repainting them. At first, we didn’t have a way of looking at it on the model. I had to eyeball it, and of course, it would be off. We just didn’t have access to the original models at all.

LP: We had to write a converter so that we could open them in a 3D package. We had some things like signs, rocks, grass. Like Steve said, we’d scale them up, clean the alphas, repaint. Then we later found in the TY2 archive a bunch of TY1 stuff! High-res maps.

SS: We also did some programming hacks to fix some little things that had been bugging us, like the single black pixel in Boss Cass’s eye. Man, that’d been bugging me for years! Once you saw it, you couldn’t not.

Can you talk about some of the gameplay changes that were implemented like improved camera controls and use of Switch features?

LP: The camera was the first 3D camera we had ever made. So for the HD remaster we applied some modern development ideas to make it better. And things we learned from TY2 and TY3. We wanted to improve on the original system without changing it too much and breaking it. So we added all the modern bells and whistles for player control like inversion, camera speed, other improvements. The Switch features! It was a match made in heaven. TY has two boomerangs, Switch has two Joy-Con controllers. Awesome!

Many of our readers love to collect games physically, so we have to ask: have you considered a physical version for the new Switch edition?

LP: It’s something we’re looking into, and something we’re asked quite a bit, but at the moment we’re still focused on getting PS4 and XB1 versions done for our backers.

Now that we’ve seen the original TY the Tasmanian Tiger on Switch, has Krome Studios thought about releasing the second and third games on Nintendo’s console as well?

SS: We’d love to. If sales go well, we’d absolutely love to bring the other games to the Switch (and other consoles). But like Linds said, we’re working on the other platforms. TY2 and TY3 are ready to go, from an art asset perspective. They’re already on Steam. For the porting work, it would be different though because they are on a different engine than TY1.

On that note, has Krome Studios considered creating an entirely new entry in the series that follows the same type of 3D platforming gameplay as its predecessors?

SS: Yes, of course we have, we’ve had several discussions. If we did a TY 5, we would do it as a 3D platform. It’s also a resource issue. For that type of game, we’d need a much bigger team size, budget, everything is so much bigger. What we would want to achieve isn’t something that could be done on a shoestring budget. With today’s expectations of what the graphics and everything should look like now, it’s such a much bigger budget. The scale is pretty huge. Back in the day, the core TY1 team was around 20-25. We’re about 12 people now.

Does TY the Tasmanian Tiger have any sort of secrets that players haven’t picked up on, or perhaps lesser-known tidbits that fans may not know about?

SS: Did you know you can shoot the fireflies and they will give you a picnic basket? Ranger Ken, is Lindsay. Rex is Robert. Neddy is based off Ned Kelly a famous Australian bushranger (a bushranger is a highwayman. Stagecoach robber types). Julius is based on a TV science guy here in Australia from when we were kids. Let’s see, the cheat codes are still in. A lot of characters are from the late-night shows here in Australia in the 80s. There’s a lot of Australiana in the game and some not so Australian. If you look at the 4 male koala kids in the concept art you’ll probably recognize them from a certain TV show.

What do you make of the resurgence of 3D platformers? Nintendo is still going strong with Mario, but we’ve also seen games like A Hat in Time, New Super Lucky’s Tale, and Yooka-Laylee receive a lot of attention in recent years – not to mention the returns of Crash Bandicoot and Spyro.

SS: We think it’s great. The reason they seemed to disappear is Halo and the Xbox, Call of Duty. Those games got super popular and so platformers started to be seen as kiddie games, then mobile games and Facebook games. People are coming back because it’s fun to run around and collect things.

Is there anything else you’d like to share about TY the Tasmanian Tiger and the new Switch launch?

SS: The new game skins are thanks to the support of the Kickstarter backers. They didn’t just get us the game on the Switch, but got us new features like the skins. I love running around as Sly.