Posted on January 5, 2020 by Oni Dino(@Oni_Dino) in Interviews, Switch 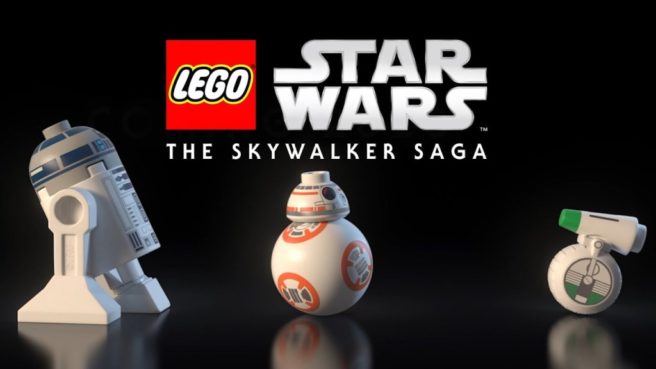 If you didn’t get your fill of Star Wars with The Rise of Skywalker, you’ll be happy to know that there’s a lot of LEGO goodness coming to Switch later this year. Warner Bros. and TT Games are preparing LEGO Star Wars: The Skywalker Saga, which packs in all of the different movies into a single experience.

A little while back, we were able to speak with TT Games creative leads Arthur Parsons and James Burgon to learn more about the game. We asked about the studio’s new engine, content carried over between episodes, the Switch version, and lots more.

Why did you decide to put so much content into one game?

AP: It’s because we want to give everyone everything that they could possibly want. We did Episode 7, and at the time we looked at that and we thought that’s a great experience, and rather than just do 8 next time, let’s do a whole thing. Let’s rebuild it from the ground up, from scratch. This isn’t like a normal LEGO game. This is a big step-up for us, so we wanted to take the opportunity to take that big step up with all new tech, and just make it the ultimate Star Wars celebration. All nine movies. So it just seemed to make sense when we looked at it like that. You don’t take a big step like this and miss the opportunity to go big with the content as well.

JB: The saga is 42 years in the making, and it wraps up this year. It needs a big sendoff, and that’s what we wanted to do.

AP: It would be like if all the Star Wars planets aligned.

This will also include [Rise of the Skywalker]. It’s going to contain story content from that movie, so people who are working on that game are probably getting some information about the movie, so they’re under heavy NDA [during development], right?

After having seen the movie at the end of the year, and then the game is going to come out in 2020, players have lots to look forward to, to sort of re-celebrate what they just saw and re-celebrate all three sagas worth of content.

AP: Yeah, and that’s just the beginning, right? You’ve seen when you’re freely exploring in space – this is all about freedom, so at the very least you’ve got all the main story plots from all nine movies. But it’s a LEGO game, so it’s everything on top of that as well. You can explore the galaxy, you can go through all the planets, you can do them in any order. You can fly through space. You’ve seen the random encounters in there, as well, right? We just want to give you as much as we possibly can, including all story stuff.

With the new tech that you’re building from the ground up for this game, is it a proprietary engine that you’re using? Or is it something that’s a bit more known like Unreal Engine 4?

AP: We can say that it’s brand new technology, from the ground up. Everything with this game is brand new tech. We’ve never used this tech before. We can definitely say that. In terms of how proprietary it is, we can’t say.

How is development been going on the Switch then with that in mind?

JB: It’s been really good actually. The first build that we had on Switch ran like a dream, so it’s great. With the new technology, we started off and had that in mind because Switch is one of our biggest platforms actually in the US, so we really want to do it justice on that platform.

AP: We love Switch. We love Nintendo. TT loves Nintendo, right? If you go back to the original Star Wars games with the Complete Saga which is one of the first game that I worked on back in 2006 – those games and Indy 1, and that kind of stuff, they were on Wii and then the Wii U. TT has been really good about doing the same game across all platforms without having to make it so much worse because we’ve been doing this for a long, long time. So the Switch, that’s not a challenge for us. Yeah there’s different technical hardware and software things with all consoles, but we work hard to make sure the experience is as good as it can be on all platforms including Switch.

AP: It’s a mentality thing. Some companies aim super, super high and aren’t even gonna do Switch. That’s not what we want to do at TT. We love Nintendo.

Does anything carry over between the different episodes?

AP: Yeah, sure. So let’s say you’ve unlocked a bunch of characters. You have free play in all of the games, and you’re free to use all of those characters as you unlock them. You’ll make the galaxy expand the more you play it, as well. The things that you collect, the kind of bricks, the unlockables – that kind of thing carries through with you as well. Did you see the giant LEGO sail barge? If you went there in a different episode, that wouldn’t even be there, right? Because that wouldn’t be within that timeline. All of the worlds are dynamic as well. You can carry stuff over and experience different things depending on what mission and what episode you’re playing on as well.

JB: As you’ve seen, as you play through Episode I you’ll unlock Mos Espa. Not only do you unlock new planets, but you’ll also be able to unlock other locations on planets, as well, as you progress through the story.

In regards to the Switch version is there a particular frame rate and resolution you’re targeting?

AP: We’re still looking at it.

AP: In terms of the actual figures, we’re going to continue to benchmark and optimize. We’ll look at it more. Right now today we’re happy with what we’ve shown, and it looks good. We’re really pleased. And part of it was gauging, is this going to stand up when people see it for the first time? Are they going to go, “Oh, this doesn’t look so great.” Or are they going to go, “Woah”? And it was definitely the latter. Every time we’ve shown it, people have gone, “Wow, this is a big step up for LEGO games.” And we’re like, “Great, so that’s the benchmark for the visuals.” Let’s make sure we can make that perform. And we think we certainly can. But first, let’s make sure that this is the level that people expect from a next-generation LEGO game.

In final, is there anything that you want to say anything specifically to the Nintendo community and Switch users that are going to be buying this game when it comes out in 2020?

JB: I would just want to say thanks so much for supporting us on that platform. There is a fanbase there that absolutely loves our games. We’re doing the best we can to make sure they all have an awesome time on that platform.

AP: On a personal level as well as a professional at TT, we love Switch. We love what it offers. We love it when families play our games together, and that includes playing on Switch – you can dock it, you can undock it. I just love it. So thanks so much.