[Let’s Talk] Hopes and expectations for the next Nintendo Direct 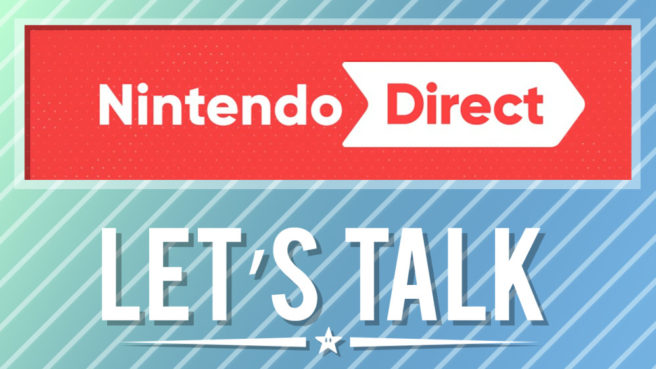 A Nintendo Direct will almost certainly be held this month. You know it, we know it. For a recap as to why a Nintendo Direct is highly expected within the next couple of weeks, you can read up on this post. But even disregarding that, common sense tells you that we need to hear from Nintendo soon in order to get a better idea about plans for 2018 on Switch and 3DS.

For Switch’s future, we do actually know about a few things from Nintendo, but not everything is confirmed for this year, and there’s a lot that’s up in the air. Bayonetta 1 and 2 along with Dragon Quest Builders are due out in February. Other than that, we don’t really have solid dates. Nintendo has previously announced Kirby Star Allies, Yoshi, Metroid Prime 4, and new entries in the Pokemon and Fire Emblem series. Project Octopath Traveler will be published at some point as well.

3DS is even less certain, though we know the system is winding down at this point. Kirby Battle Royale finally heads to North America this month, followed by Sushi Striker, and The Dead Heat Breakers (at least in Japan). Atlus will help will the early schedule out with localizations of The Alliance Alive, Radiant Historia: Perfect Chronology, and Shin Megami Tensei: Strange Journey Redux. It remains to be seen how much Nintendo will talk about 3DS, but something like a Yo-kai Watch 3 announcement for the west could be possible – if not during the next Nintendo Direct, possibly later in the year.

What are you hopes and expectations for the next Nintendo Direct? What do you realistically believe we’ll see? Do you have some crazy ideas for entirely new reveals? Let us know in the comments below.

Highlights from last week’s topic: Your 2017 Game of the Year

My GOTY is hands down The Legend of Zelda: Breath of the Wild, and yet here I am, playing chapter 8 of Xenoblade Chronicles 2 instead of the Champions’ Ballad, this game just keeps on giving and probably if it featured climbing or a parasail I’d consider it better than Zelda, the OST is flawless, the Combat System is layered and satisfying to master, the locations are breathtaking (not that Zelda’s weren’t too, but this is on a whole other level of fantasy/sci-fi) I’m simply mesmerized by Xenoblade and I can’t wait to see what a project made AFTER BotW laying down the basics for Open World games could become in Takahashi’s hands.

Super Mario Odyssey takes the cake for my “Game of the Year.” It’s just so much fun – it has everything you know and love about 3D Mario games, and is brimming with creativity the likes of which we’ve never seen in a Mario game before. I found Zelda: Breath of the Wild to be mostly hum-drum with only a few awesome parts spread throughout, plus the world is just too frustrating to navigate. But the world of Super Mario Odyssey is both big AND accessible. Definitely my pick for game of the year.

I’ve never had a year that was so difficult for me to choose my personal game of the year. Between Zelda, Mario, and Xenoblad 2—it’s absurdly hard for me to choose between them. I think ultimately my choice will go to Mario Odyssey, but man, any one of them could take the cake.

Ever Oasis would be my favourite game. Even though I’m a pokemon fan, Ultra Sun is way too hard to play.