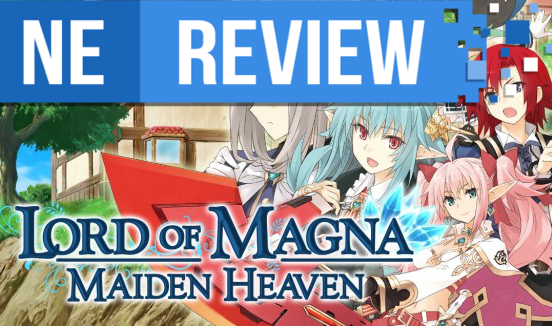 Though I haven’t had much experience playing their previous work, I’ve always had a lot of respect for Lord of Magna’s original developer, Neverland. Whether it’s the intricate puzzles of Lufia, the DIY dungeons of Dark Seed or the laid-back life simulation of Rune Factory, their games always find some way to put a unique spin on the role-playing genre. What a shame then that what is likely their final title lacks this same creative spark, with a story that falls back on tired tropes and a blend of strategy RPG and dating sim mechanics that fails to capture the appeal of both genres. It’s nice that the game even exists following Neverland’s declaration of bankruptcy, but Lord of Magna’s troubled development is very much apparent in the final product, and I wonder just how finished the game actually is. 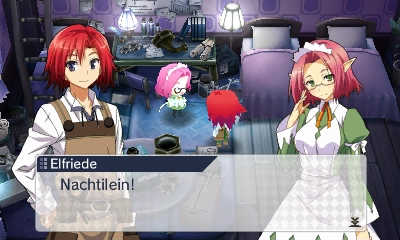 Lord of Magna casts players as Luchs, who is refreshingly just a simple innkeeper rather than one of those mute sword-swinging heroes that so dominate the RPG genre. Not that the game really involves a whole lot of innkeeping; despite running the only inn on his island, Luchs hasn’t had a single visitor in years and instead takes to mining the game’s currency of crystals. Why even bother to keep such an unprofitable venture running? Luchs is driven by a promise to keep the inn open for “family”, in spite of the island’s strict “no outsiders” policy and any common sense. Following a series of literally earth-shattering events, Luchs encounters a group of warrior sisters known as Artemis who both fight alongside him in battle and work alongside him at the inn (as maids, naturally). Here the game’s “dating sim” elements come into play as Luchs can choose who to spend time with between chapters. The problem is that, despite the attempt to flesh them out through these optional “heart” events, none of the cast members are particularly interesting. Too often the character writing falls back on trite anime clichés —Charlotte’s a woman who can’t cook! Gabrielle looks and acts like a child but doesn’t want to be treated like one!— and some of the main characters are introduced too late in the game to receive much in the way of character development. It feels like these last few Artemis were intended to play a larger role, but the game’s rushed second half has them mostly keeping to the sidelines.

Another issue with these “heart events” is that there are only three event scenes per character. Given that each event also contains an enemy encounter to play through, it makes sense that there aren’t many of them, but it makes it difficult to get too invested in the romantic aspects of the game. It’s a very “hands-off” approach to romance, too – you can choose who to hang out with but there’s no other decision making or Rune Factory style gift giving here. Stranger still is the fact that it’s possible to skip a character’s first two events altogether, leading to a sudden confession of love that doesn’t feel like part of a cohesive character arc at all. That said, these interactions were the high point of the game for me, and the only real reason to replay the game is to see them all – something that’s impossible to do in a single playthrough. Seeing all these events is also important because it strengthens both Luchs and the girls in battle, unlocking new techniques to use. 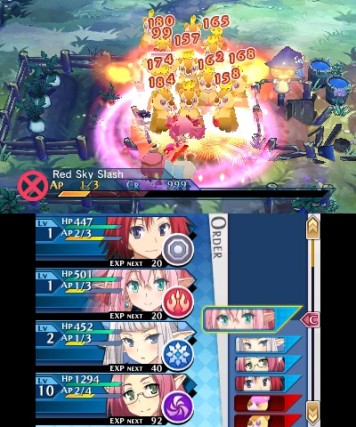 Lord of Magna’s strategy RPG segments play out similarly to something like Valkyria Chronicles or Growlanser, but it doesn’t quite have the same depth or difficulty. Battles are turn-based, but you can move Luchs and his fangirls around within a set radius to get in position for an attack. Positioning your attacks is particularly important in Lord of Magna, since knocking down ten enemies in a row nets extra turns. Although the way enemies are launched doesn’t always make sense, it is satisfying to knock them all over like bowling pins. Setting up combos also fills characters’ “tension gauges”, which are used to launch flashy (but unfortunately unskippable) attacks that unlock based on the girls’ relationship with Luchs.

Lord of Magna’s battle system seems pretty enjoyable on the surface, but tedium quickly kicks in. The big problem is that all moves are reliant on characters’ “AP”; one of these points is recovered every turn, but some of the more powerful moves require setting characters to wait around for several turns, which isn’t terribly exciting. While individual turns are quite quick, the crowd-clearing combat often means the battlefield is filled with more enemies that the game can actually display onscreen at once and most of the fights are spent waiting for your turn to come around. It’s a risk/reward system that doesn’t quite work because I found that very few abilities were actually worth wasting turns to charge. Battles also drag because bosses have far too much HP to slowly whittle down. Any damage dealt can be mitigated by a powerful healing spell Luchs gains access to early on and the enemy AI is absolutely brain-dead, so most of these battles aren’t particularly difficult, they just take forever. There’s just not enough substance and strategy here to justify how long the fights take. 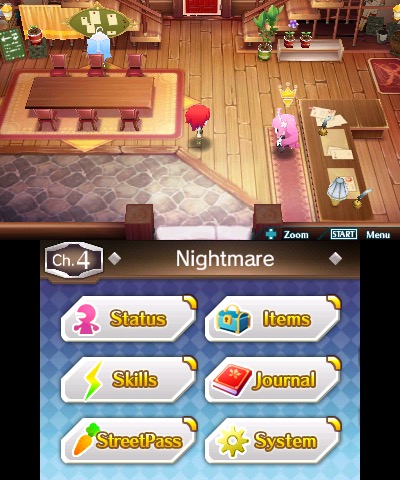 Pacing is absolutely not Lord of Magna’s strong suit. The story segments also drag on for far longer than necessary with conversations that seem to go on for ages (including a chapter called “Words” which is seriously just a thirty minute text dump). This isn’t inherently bad (unless you’re itching to reach a save point), but the plot and characters in Lord of Magna just aren’t interesting enough to justify all the talking and very little actually happens throughout the game’s twenty-hour running time. I appreciated Lord of Magna’s strong theme of familial bonds, particularly since it makes the cast feel more like a family than a harem, but it’s way too heavy-handed with its themes, to saying nothing of the constant questions of “do you have the power? Are you the one?”. There might not be any other RPGs with innkeepers as protagonists, but nothing else about Lord of Magna’s clichéd plot is going to win any awards for originality. Finally, a game that breaks Final Fantasy VIII’s record of the highest number of playable characters with amnesia.

Though it has a similar pastoral setting to Rune Factory, those expecting Lord of Magna to retain the exploration and deep simulation elements from that game will be disappointed. Instead players are railroaded through the plot with just the occasional break to chat with the girls, barter for items or craft crystals for new skills. It’s a shame that the only location that can actually be explored is Luchs’ inn, because it’s bursting with neat details. Given that the characters seem to end up ambushed by monsters every time they set foot outside of the inn, the lack of exploration is almost justified, but there’s no real sense of place as a result. One weird holdover from Rune Factory is a rudimentary farming system that grows items based on Streetpass hits. I have no idea how it works because I haven’t passed a single person who was playing this, but it certainly exists. 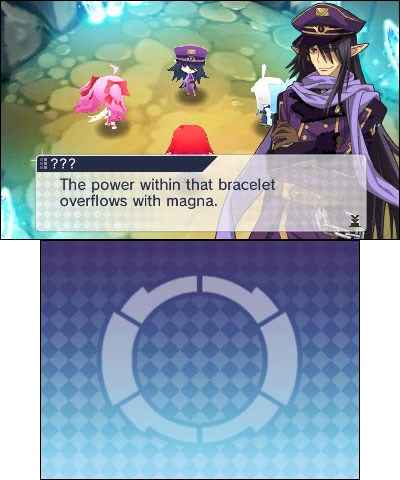 Lord of Magna’s localization isn’t bad, but it doesn’t quite have the same wit as other XSeed titles like Rune Factory 4 or The Legend of Heroes: Trails in the Sky. While some of the item descriptions and other flavour text are amusing, there are a bunch of running jokes like Luchs’ pal Bart’s obsession with maids that just aren’t funny. That said, the game is at its best when it’s taking a lighter humourous tone, because all that serious exposition just doesn’t work with the game’s cutesy character designs. Lord of Magna uses big-headed character models that blur the line between sprites and 3D models. They’re expressive but simple enough to not slow the game down too much, although the way they animate is strange. Each character slowly cycles through a few frames of animations, which makes the game’s framerate look worse than it actually is. They also turn into a blurry mess with the 3D slider turned up, which is a shame because all of the locations actually look quite good in 3D.

Lord of Magna’s soundtrack is decent, but I’ll admit I played the game muted after the first few hours because I just couldn’t take Beatrix saying “efficiency is a fine companion to visual presentation” any more. There’s only an English voice track available and while it isn’t bad, the voice clips in battle quickly become grating. The voicework is also weirdly inconsistent; some minor lines are fully acted while other major plot points are conveyed entirely through grunts. 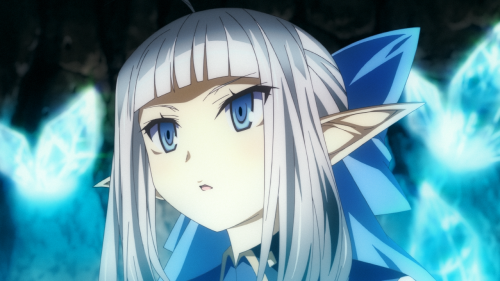 There just isn’t really anything compelling about Lord of Magna. While the game’s presentation is passable, there’s little depth to the characters, story or combat. The dating-sim elements might have been novel back in the ‘90s when all the kids were debating who to take to the Golden Saucer and importing copies of Sakura Wars (which has a setup and battle system that’s suspiciously similar to Lord of Magna’s), but now everything from Fire Emblem to Mass Effect to Pokémon to Persona has some sort of relationship-building system. It’s not as interesting now everyone is doing it, especially not when the relationships are set to fast-forward and the heroines just come off as a bland collection of character archetypes. Surprisingly, I found Luchs to be the closest thing the game had to a compelling character, with a sense of agency and personality that I wasn’t expecting from the protagonist. For better or worse, the game is a lot lighter on fanservice than something like Senran Kagura, and is pretty tame outside of a token bathing scene and the bouncing three-dimensional breasts in the opening cutscene. Even if you choose to pursue the obviously-underage-but-actually-a-centuries-old-goddess, there’s nothing particularly sleazy here (though the girls’ constant referral to Luchs as “master” is a little weird). While some might appreciate the slice-of-life scenario and relaxed atmosphere of hanging out with a bunch of anime maids at the inn, as an RPG I can’t recommend Lord of Magna to even die-hard genre fans, especially when there is no shortage of higher-quality options on the console. 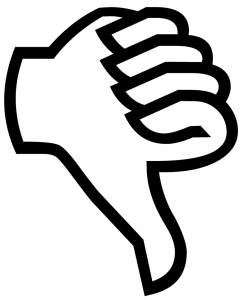 Our review scale doesn’t allow for any distinction between “below average” and “Sonic Boom”, so consider Lord of Magna to be a disappointing title that fails to do anything of particular interest. Lord of Magna might come off as unfinished, but it isn’t broken. Elements like the lack of any real exploration, relatively short length (it took me about twenty hours for an initial playthrough) and abrupt ending hint at a game with a rushed development that was no doubt affected by Neverland’s bankruptcy. Lord of Magna is almost salvaged by its battle system and relationship building, but both of these aspects are deeply flawed and caught up in the game’s tedious, uninteresting plot. It’s a shame that Neverland had to go out with this dud and I can only really recommend it to those with an insatiable lust for elven ears or a need for a quick and easy insomnia cure.