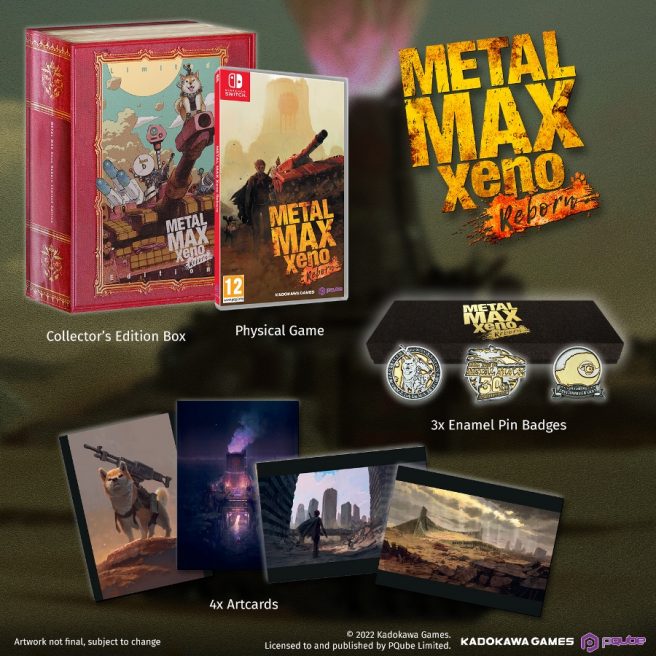 Nearly a year after Metal Max Xeno: Reborn was confirmed for the west, the game has a final release date. PQube announced today that the title will be available in North America and Europe on June 10, 2022.

Metal Max Xeno: Reborn was first announced for Switch in 2019. It then debuted in Japan back in September 2020.

Take control of Talis and search for other survivors who wish to fight back against the machines. There are no limits to where you can go, no matter your progression in the game.

The fate of the universe is in your hands! Unite the remaining survivors across the land, recruiting new members to your party and bringing different skills to the fight!

Hunt down your enemies with the help of up to 3 teammates, plus your beloved battle dog, Pochi, who acts as a special fourth member of the team!

Pochi can also level up, learn new skills and joins the firefight as your fourth party member. Help him earn skill points by feeding him at the base.

And yes, you can also pet him.

Gear Up For Victory!

Target your enemies using your tanks and weapons to unleash your powers to inflict massive damage. With a full party, combine your skills to balance your strengths and weaknesses and ambush the monster machines from all sides.

Salvage And Build Your Weapons

Scavenge tanks & parts from across the wasteland. Customize with fresh paint and the strongest firepower you can find with the brand new vehicle modification system.

Tanks can range in design and scope. Freely customize your tanks, swap out engines, upgrade the weaponry and bump them with special equipment. Enjoy endless possibilities with combinations.

Strike your enemies from inside your tank, or disembark and explore dangerous dungeons on foot with your allies.

Other than the release date, PQube has also uploaded a new trailer for Metal Max Xeno: Reborn. Give it a look below.

Metal Max Xeno: Reborn will be sold both physically and digitally on Switch. Funstock is also offering a limited edition which has three enamel pin badges with a branded box, four art cards, and collector’s edition box. Only 500 copies will be made and pre-orders are already up here.