Minecraft announcements from Minecon Earth 2018 – next update, pandas, and more 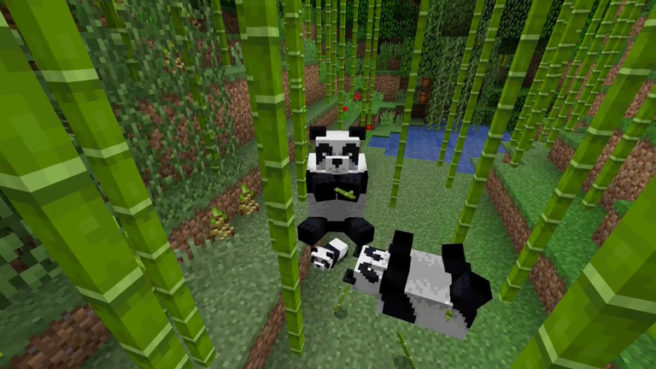 Today, Minecon Earth 2018 was held. All sorts of announcements were made pertaining to Minecraft, including the next update, the inclusion of pandas, and more.

Below are some of the highlights:

THE NEXT MINECRAFT UPDATE: VILLAGE AND PILLAGE

Jens ‘Jeb’ Bergensten and Agnes Larsson took to the stage and talked about the next big update to Minecraft, one which brings loads of new villagers to the game! Village and Pillage will fill the villages of the Overworld with new friendly folk. You’ll even find variations of their designs in different biomes! Allow me to introduce you to the future residents of the jungle biome:

Our most friendly update ever then? Er, not exactly. The nefarious Pillagers and their Beasts will be joining Minecraft to cause all kinds of havoc upon unsuspecting villages. That’s not nice! That’s not nice at all!

Pillagers will be armed with a new weapon, crossbows. Luckily, YOU’LL be able to craft and use crossbows too! They take longer to use than bows, but make up for it with superior power (and they’re even more helpful if you use enchantments on them like fast load or multishot or TOP SECRET ENCHANTMENT WE’RE NOT REVEALING HERE SORRY NOT SORRY) Better start getting ready to defend the villages from the Pillager attacks…

You’ll find a lot more variety in how villages look depending on what biome you’re visiting, too (along with some completely new villages). But enough about what we’re building – we want to see what YOU make with new building materials! That’s why we’re adding – just seven years after it was suggested at the very first Minecon – scaffolding! It’s made from bamboo, which will be great news for when one of the next mobs we announced wants a snack…

CUTENESS OVERLOAD INCOMING. Yep, and they’ll be incoming very soon! We’ll have more news about these adorable new Minecraft mobs in the next few weeks – keep an eye on Minecraft.net!

As for Village and Pillage, that update will be coming to Minecraft early next year.

You can read up on all of the news from Minecon Earth 2018 here.