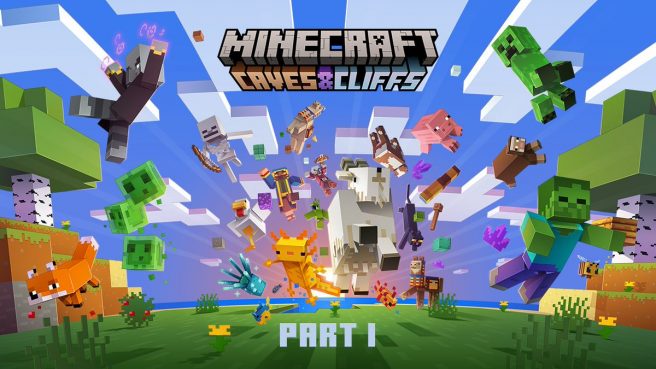 Minecraft will be receiving the first part of its Caves & Cliffs update next week, Mojang has announced. It will be available for all Switch players on June 8.

Here’s everything you need to know about the update:

As I tumbled down the mountain, I pondered all the choices that led to installing the Caves & Cliffs snapshot. My act of sheer folly as I approached the goat and extended the proverbial olive branch – a bundle of hay. All my belongings now strewn at the base of the mountain. But there is time to make this right – because the Caves & Cliffs Update: Part I is coming out on June 8! And in the meantime, I will be officially petitioning the Vanilla team to remove goats from it.

The update will be available for Minecraft: Bedrock Edition on Xbox Series X, Xbox Series S, Xbox One, PlayStation 5, PlayStation 4, Nintendo Switch, iOS, Android, and Windows 10 – as well as Java Edition on Windows, macOS, and Linux. Clearly, nobody is safe from those dreaded creatures. The good news is that the update also includes the lovely and totally-harmless-unless-you’re-a-drowned axolotls! Unfortunately, they’re confined to either water or a bucket, so they won’t be able to join my anti-goat crusade.

But that’s not all – the once Minecraft Earth-exclusive mob, the glow squid, will also be gracing our oceans! While I was Team Mooshroom (another petition I need to get around to), I’m just glad this one won’t be rewarding my kindness with a brutal shove. Plus, it’s so pretty it might just motivate me to build that huge aquarium I’ve always wanted.

And what would a Minecraft update be without blocks? This round, there’s plenty of them. Some of them will just pop up in the world, while others might be a bit trickier to discover. If instant gratification is your thing, then you can always switch to Creative mode, where you can access them all, from amethyst to dripleaves, and the highly anticipated copper block! Much like my referential humor, this block shows its age after being placed in the world, giving your builds a sense of history and a more organic feel. However, I think the most exciting thing for me is the spyglass! My eyesight isn’t what it used to be, so those goats really seem to come from nowhere right now.

There’ll naturally be another portion to Caves & Cliffs, though Mojang has not yet said when it will be going live.