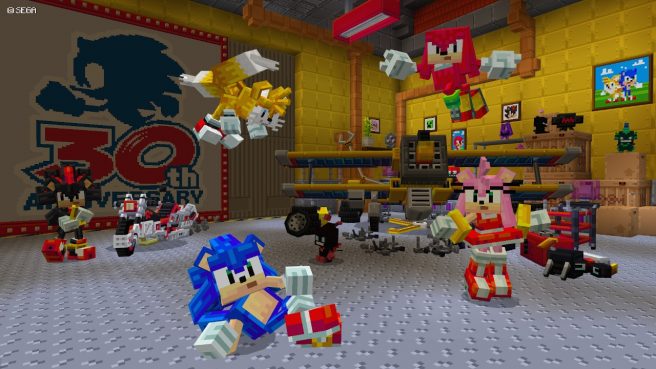 In celebration of Sonic’s 30th anniversary, Mojang Studios has revealed a new collaboration for Minecraft. It’s live now on Switch.

Below are all of the important details:

What a relief! I never have to make up an excuse for not voluntarily jogging, because now I have an infinite 3D runner at my fingertips. I can get all the need for speed my system craves in the different acts and procedurally generated locations instead. Boring forest trail? Tired beach route? Pass! I’ll stick to the Green Hills Zone and Chemical Plant Zone, thank you very much.

Look, before we go any further, let me address the elephant in the room. Yes, there are rings to collect. They are the blockiest rings you have ever laid your eyes on and I love them. I’m not saying there was anything wrong with the original rings, but these right angles just feel right. The rings aren’t the only thing that Sonic brought with him, there are also plenty of obstacles to dash past, bosses to defeat, and momentum to build as you run towards a high score.

Sonic isn’t only known for his speed or spikes, but also as a generous celebrator of birthdays. He doesn’t expect gifts on his special day, he hands out his own! That’s classy. Get your hands on a Character Creator item, available for free in the Minecraft Marketplace.

You can also celebrate Sonic’s birthday by joining the special server event! Starting soon, The Hive are hosting a two-week server-hub takeover featuring mini-games and a few festive surprises. I heard a rumor that something special is happening on one of the weekends, so make sure to check in regularly! Keep an eye on @minecraft on Twitter for details!

We have a trailer for the Sonic the Hedgehog collaboration in Minecraft below.