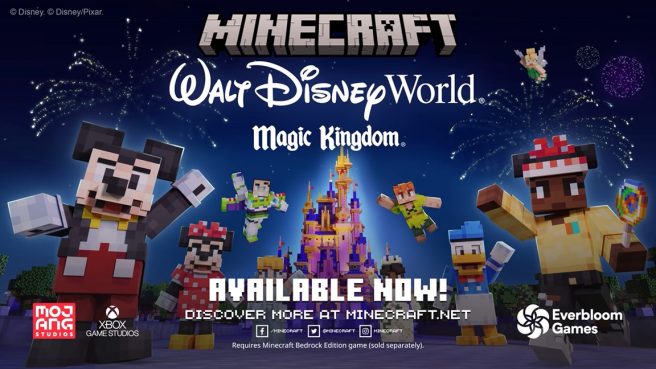 To celebrate the 50th anniversary of Walt Disney World, Minecraft has revealed new DLC based on the Magic Kingdom that has been recreated in the game. Switch owners can pick up the content starting today.

The DLC features attractions like Big Thunder Mountain Railroad, Space Mountain, and “it’s a small world”, 29 iconic Disney and Pixar characters to meet, and even a fireworks show. Players will receive a ton of different skins and special in-game merchandise. The lineup includes a set of iconic Mickey & Minnie Mouse ears as character creator items, along with a bunch of other festive gear such as Elsa’s dress, a pirate hook, and Woody’s hat.

Here’s a trailer for the Walt Disney Magic Kingdom DLC in Minecraft:

Minecraft is certainly no stranger to collaborations. Some of the more recent DLC partnerships include Minions, Sonic the Hedgehog, and Ben 10. There’s no question that players can look forward to even more collaborations in the future, and we’ll let you know about any major announcements that are made.

Minecraft is available on Switch having first appeared on the system back in 2017. Steve and Alex from the game are also in Super Smash Bros. Ultimate as DLC.