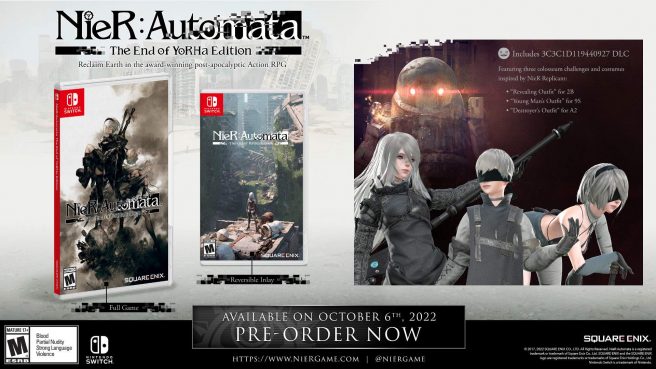 Original (6/29): NieR: Automata has finally been confirmed for Switch and will be sold as The End of YoRHa Edition. During today’s Nintendo Direct Mini: Partner Showcase, Square Enix and PlatinumGames shared the news. It will launch on October 6, 2022.

NieR: Automata: The End of YoRHa Edition contains the original game and its DLC. That means you’ll get the 3C3C1D119440927 DLC, which includes three challenging colosseums, boss battles, and additional costumes that are inspired by NieR Replicant. Also available for download will be the free 6C2P4A118680823 DLC, which features various cosmetic items, including six costumes, four accessories plus two pod skins based on characters from the mobile title NieR Re[in]carnation.

NieR: Automata tells the story of androids 2B, 9S and A2 and their battle to reclaim the machine-driven dystopia overrun by powerful machines.

Humanity has been driven from the Earth by mechanical beings from another world. In a final effort to take back the planet, the human resistance sends a force of android soldiers to destroy the invaders. Now, a war between machines and androids rages on… A war that could soon unveil a long-forgotten truth of the world.

Update (6/30): NieR: Automata: The End of YoRHa Edition is up for pre-order on Amazon here.